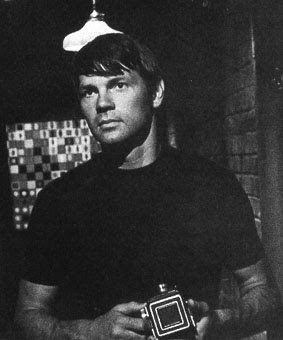 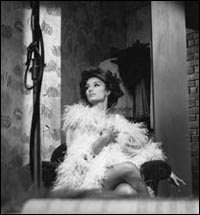 One of the most exquisite "bad" films I can think of is Jacques Demy's Model Shop, which was made in Los Angeles in 1968. Other than the unearthly Anouk Aimee, the other actors are turgid & uninteresting - the plot & dialogue are uninteresting. I would be adverse to recommend it to some as it could all too readily be perceived as an extremely boring film, and yet . . .

The protagonist, the boy, is a type that was fairly conventional in movies of this period (late 1960s, early 1970s): alienated, anti-heroic, drifting - a grown up Holden Caufield, literally on the road, following a figure of impossible sophistication and beauty. Anouk Aimee leads to a storefront called Model Shop. It is a business in which men pay for a photo session with a model. There are backdrops & lights - it's not pornographic but the scenarios are all sexualized. The clients can choose a set, such as a brass bed, & they are handed a Rolleiflex, loaded with black-&-white film, the aperture & shutter speed set. The Model Shop then processes and prints the film.

Besides the rapturous tracking shots of the streets of Los Angeles, this is where my curiosity is piqued - my main question being did such businesses exist? A do-it-yourself boudoir scenario. Was the a fantasy of a French New Wave director confronting American laissez-faire economy? Is this a coded way of stating "brothel" or "prostitute"? Or were there actual such prosaic dingy storefronts to be visited? I have asked various people who might have some knowledge of the peepshow culture of that time, but none have had an answer either way. I thought of the work of Irving and Paula Klaw, working with Bettie Page and other models in old hotels on E. 14th St. But what about the DIY aspect so strange & compelling in Model Shop? If there were such businesses where are the photos?

The boy hires Anouk Aimee for his 12-frame moment, which initiates their relationship. The film is not realistic: Anouk Aimee dresses expensively, she drives an expensive car, & yet she works at a sub-peep show. Anouk Aimee's character is the same she played in Jacques Demy's earlier film Lola. Anouk/Lola is now quite disillusioned, melancholy, and intending to return to France. Demy's films are often about the pursuit of romantic dreams, but there is also a bittersweet aspect, which in Model Shop leaves all the characters isolated and alone. The pathetic roll of film illuminates loss and disappointment. The Algerian war is mentioned. The conflict in Vietnam is the immediate future.
Posted by One Way Street at 6:55 PM

eBambi
The Models - Photographers (but not only) social network.
Join now:
http://www.ebambi.com