Robin Graubard, The Hold Up 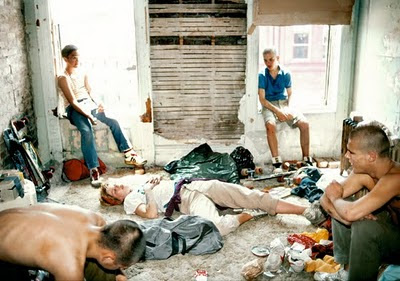 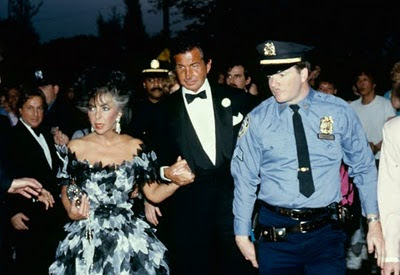 Robin Graubard's current exhibition at Participant is an invigorating and expressive exploration of an eclectic range of photographic work. Graubard's images were made both professionally, as a working photojournalist, and photos done for private purposes - one would assume. No information is offered as to the origins of the work, which is one of its great strengths: the photos are displayed in informal groupings, without the linear narrative of a news or personal story. Instead the gallery is more like a box in which photos are kept randomly. We can bring different associations to the images, but they will not explain themselves to us.

The play between recognition and lack of knowledge is a profound aspect to looking at photographs. We see & don't know. Tallies of the contents of the work include: homelessness or squatting, youth culture, music, downtown NYC before gentrification, crime, wars in the Balkans, suburban domesticity, drugs - but making such a list does not reveal much at all. Nor can we know Graubard's involvement - as a paid professional or participant (excuse the pun).

I am impressed with how the show deals with news photography, which in some ways is truly ephemeral. Unattached to a crisis as it occurs in the virtual present tense of media, what is it? We can look at 19th century Civil War photography like the work of Mathew Brady or Alexander Gardner in a comfortable, distanced way, & see it on a museum wall, where it becomes art, as an aesthetic consideration. & likewise at MoMA we can see "iconic" images by W. Eugene Smith of World War II. What becomes imperative in looking at Smith isn't necessarily the situations, but the superlative darkroom technique, the liberal use artistic compositional strategies to make a point.

Looking at Robin Graubard's installation I am struck by what seems to me a very sensitive poignancy in conflating both the "outer" world of media & the "inner" tensions of a private world - it's a model of the shifting levels of consciousness, which we tend to overlook in our overlooked drawers & shoeboxes, of the ephemera we forget but which tells much more than anticipated.
Posted by One Way Street at 8:11 AM 1 comment: