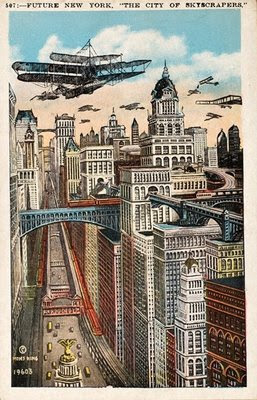 at the Metropolitan Museum explores what has been otherwise a footnote in the surveys of the work of Walker Evans: his postcard collection. & in relation to Evans' own photographic practices.

The premise of the exhibition flirts with kitsch. Evans is the great modernist photographer: as much as one can locate content in his images (the things they are of - Victorian houses, the families in Let Us Now Praise Famous Men, detritus of the Great Depression, etc.), the content is subordinate to the framing, the presentation, the bigger project of Evans' work as a whole. From a formalist point of view it all becomes radical composition, a kind of interrupted illustration, illustration aware of itself & pulling back from meaning, from function, but one could also cite it as an archive of relentless curiosity & disengagement. In Evans' work there is no progress, no movement; all is stasis, & without motivation. Avant la lettre, there is an existential repulsion to social engagement or meaning, as well as a relish of the act of doing, nevertheless.

At this point, institutionally, Evans has entered into an unimpeachable canon of Great Artists, which seems to do him disservice, turning him into a patrician expert, when what seems most vital about him could be described as neurotic, alienated, dissatisfied. Compared with other documentary photographers of the 1930s, from the politically motivated work of Ben Shahn to the spectacular magazine work of Margaret Bourke-White, Evans seems unmotivated, depressively aesthetic, unconcerned. & this gives the work a wider valence of sensibilities, a mood as opposed to the thing itself. Evans valiantly defined his work as "documentary style" as opposed to "documentary" which is perhaps a richer statement now, more meaningful, in what I honestly think is the twilight of documentary work as it disappears from mass media & migrates to the realm of museum practices.

There has been a serious amount of writing about Evans: Alan Trachtenberg, Tod Papageorge, John Tagg, are who I think of, but there is much more. Evans' images were appropriated by Sherrie Levine in the early 1980s in one of the great moments of post-modern photography. & there is not just 1 but 2 biographies of him, as well, in a world wherein there are next to no biographies of photographers (I tell my students that's because most photographers had such boring lives, that it's a dull existence & there's not much to say about it), as well as a fairly blunt memoir about Evans' last years before his death. One unspectacular but meaningful book for me has been Walker Evans at Work, which addresses Evans' work practices. There is a racy passage in John Cheever's journals about Evans, which is in dispute (did it really happen?), but indicates, at least, a psychological tension (for both Cheever & Evans) that is more Patricia HIghsmith than Clement Greenberg. How to add such a literature?

The Met, which now possesses the Evans archives, has done a truly meaningful exhibition & book exploring Evans' interest in the common mass-produced picture postcard. Genealogies of Evans' methods have been traced from the Civil War images of Matthew Brady to the extensive archives of Eugene Atget (inartistic images, factual, informational). The Met show shows another genealogy in strictly banal mass-produced imagery. & Evans, with his large collection (1200 or so), seems all the richer for his interplay with such drugstore imagery. Postcard imagery depends on its accessibility, its simplicity, its lack of hierarchy - anything is fit to be a postcard. & it shows the world now, which means postcards become obsolete, they will always need to be updated.

This obsolescence becomes historical artifact in Evans' collection. Say unlike most photojournalism which deals with a "spot news" aspect to history - seeing it as it happens, Evans' work & likewise the voluminous postcard collection, indicate a history only in retrospect. Evans photographed the detritus of happenstance. Postcards are of an unlikely objectivity, things as they are, presented as such, in an utterly dreary, banal way, which as such becomes quite fascinating.

The Met shows some of Evans indexing, his categories - town centers, industry, etc. These are vaguer & more opaque than what can be found at any flea market, but otherwise, just the same.
Posted by One Way Street at 6:06 AM 1 comment: