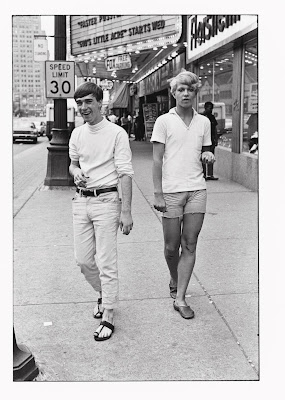 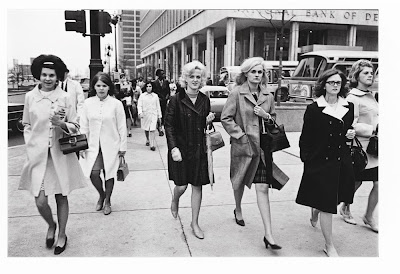 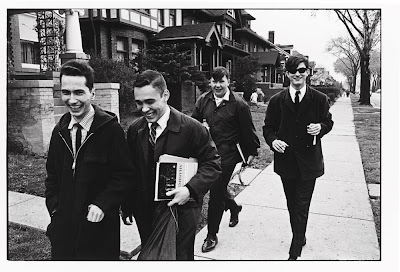 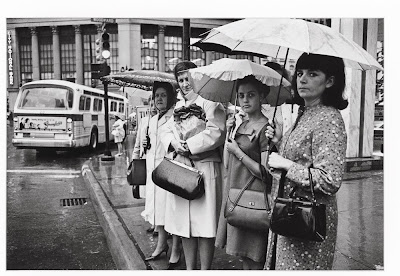 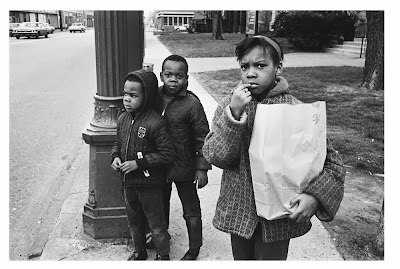 Why do I find the images in Enrico Natali: Detroit 1968

The recent bankruptcy filing by the city of Detroit may act as a marker for legal and financial definitions of decline or catastrophe, but does it tell us much beyond civic bureaucracy? In media, Detroit in recent years, has become as exotic a place as Berlin, where one can still find traces of World War II, or Havana, closed off from the splendors of the West by dint of its revolution, whereas Detroit is the ruin of industry, of capitalism, on a grand scale. Camilo Jose Vergara's "immodest proposal" to cordon off downtown Detroit as an Acropolis of Industry dates from 1995. "Crisis" was how industry ran, no stranger to generations of the city; but if one were to sense a sea-change, it would be that in the past, a crisis would necessitate change of some sort which would be considered to lead to some sort of resolution, however provisional that may be; whereas now, where do we go? The solutions of the past were in relation to industry, but now there is no industry, just people and a place. The cynical machinations of the Kwame Kilpatrick administration, illuminated through Kilpatrick's various trials and serial imprisonments could be seen as the the fulfillment of entrepreneurial stewardship: he was just doing what you would do in that situation, getting what he could get. Or, as Kilpatrick wrote in one of the numerous texts to his mistress, as reported in the Detroit Free Press: you're only busted if they see you. A state-appointed supervisor, working above the city's government, illustrates another endgame of bureaucracy: make more bureaucracy. Along with the continual crisis of the the economy, the stopgap measures of a failing government lay out a weird cycle of damnation and futility pulling the puppet strings of the the terrible world of Capitalism, in which God's grace is measured in financial terms.

The Fordist principles that transformed Detroit from a small-ish manufacturing center in the late nineteenth century to a hub of automobile manufacturing and the "arsenal of democracy" during World War II were structured around the idea of production, of a potential unlimited production. It also meant folding the workers into production and consumption, making the workers synonymous with their work. Looking at the policies of the Sociological Department and English School at Ford we can see a thorough process of institutionalized assimilation at work. From the Ford archives:

The culmination of the Ford English School program was the graduation ceremony where students were transformed into Americans. During the ceremony speakers gave rousing patriotic speeches and factory bands played marches and patriotic songs. The highlight of the event would be the transformation of immigrants into Americans. Students dressed in costumes reminiscent of their native homes stepped into a massive stage-prop cauldron that had a banner across the front identifying it as the AMERICAN MELTING POT. Seconds later, after a quick change out of sight of the audience, students emerged wearing “American” suits and hats, waving American flags, having undergone a spiritual smelting process where the impurities of foreignness were burnt off as slag to be tossed away leaving a new 100% American.

Assimilation also means erasure and forgetting. A place like Detroit, expanding outwards into the flat fields outside the city, allowed people to emerge in a New World made of industry, shopping, and a family home. The centrifugal patterns of development would emerge later as a more disastrous pattern than anticipated when the core of the city,from  which all radiated out long avenues, became hollowed out by abandonment.

Which take me back to Enrico Natali's photographs, which are from the late 1960s. The decline of the Big 3 was already in place, or at least the decline was local: the Big 3 were moving factories to North Ireland and South Africa. The 1967 riot had been very destructive and polarizing between city and suburbs, but Detroit was still a very wealthy city.

We can see a little of that in Natali's photographs. It's a shock for me now to see the downtown streets crowded, that there had been a sense of it as a place in which to circulate, to shop or see a movie (sorry to miss Faster, Pussycat! Kill! Kill! on the big screen).. The predominantly white population downtown are in movement: downtown reads as an excursion. & so many f the people in groups look like they are in uniforms, too, of some sort. Natali's street images could be read in contrast with Garry Winogrand's - Winogrand's images are composed in a more gothic, anamorphic way - we become aware of the camera and its use more than any subject. Whereas Natali works with methods related to the documentary projects of the 1930s: there's less intervention in framing, the images have a contemplative aspect to contrast with what were busy, circulating streets. In the prints I've seen there's an immaculate technique in terms of exposure & printing, and an operative kindness towards the people in the photos. Another aspect of the images that could be explored is how gendered the groups are - men with men, women with women, along with any racial divides that could be seen, too.

The feyness of the two boys in front of the movie theater makes me wonder: in contemporary terms the image reads as queer, but historically, would queerness have existed like that? Or are these proto-metrosexuals? The boys exude a sense of privilege, which may be the privilege of just being very young with the blitheness that they occupy the place. An industrial city like Detroit was not a tolerant space for queerness in public.

Earlier this year on line I found another Detroit photographer, Bruce Harkness, with work from the 1970s. Harkness worked in the Cass Corridor, the slum just north of downtown, with some images from a transvestite bar The Gold Dollar Show Bar and another local place, Verdi's Bar, which shared clientele. Harkness's photos remind me of Anders Petersen's Cafe Lehmitz somewhat, with a Weegee flash and that old industrial Midwestern sense of grimness-in-daily-life. But my point in this is: the sense of exclusion and concealment, the afterhours as refuge at the Gold Dollar or Verdi's were the reality of local queerness in Detroit. Harkness was totally off the map for me prior to finding his website.

There are other Detroit photographers, such as Bill Rauhauser and Brad Iverson who have significant bodies of work done in Detroit. Nancy Barr has curated exhibitions of photographs of Detroit at the Institute of Arts: Detroit Revealed, Motor City Muse, and Robert Frank - Detroit Experiences 1955 which are significant expansions of its visual history. Another contemporary photographer who works with images of Detroit past & present is Dave Jordano. The artists in Detroit are perhaps its best reporters - they still work outside a globalized post-Fordist economy, there's still a locatable sense of agency to practice, they're outside the absurdist theater of local politics or the viciousness of industry. Who to consult in this invidious world?

The Natali image of the two boys exudes a pungent sense of outrageous arrogant privilege in a stroll down Woodward Ave: next stop, Ibiza!  I see so many of the contradictions of daily life in Detroit. The boys return me to Middlesex, to the "Obscure Object" for Cal/Callie when in high school in Grosse Pointe, to the adolescent abyss of seeing someone attractive, outside of oneself, and cruelly self-contained and unattainable. In the emotional aftermath of that realization one could echo on a personal level, the city of Detroit motto, penned by Father Gabriel Richard, the founder of the University of Michigan, in 1805 following a fire which destroyed the entire settlement: Speramus Meliora; Resurget Cieribus - We hope for better things; it will arise from the ashes.

Posted by One Way Street at 3:33 AM No comments: