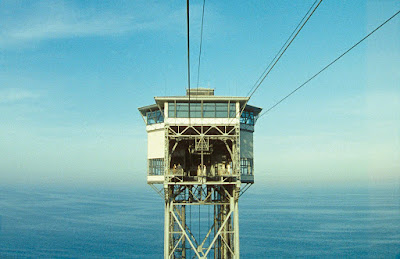 The particulars of Barcelona, its topography, and the proximity of the sea, pale in the enormity of the ether in which the figures traverse. With a simple economy of means so much is suggested. Industrial culture appears toy-like, and also obsolete. I am reminded of some lines from The Communist Manifesto: All fixed, fast frozen relations, with their train of ancient and venerable prejudices and opinions, are swept away, all new-formed ones become antiquated before they can ossify. All that is solid melts into air . . .
Posted by One Way Street at 1:20 PM No comments: 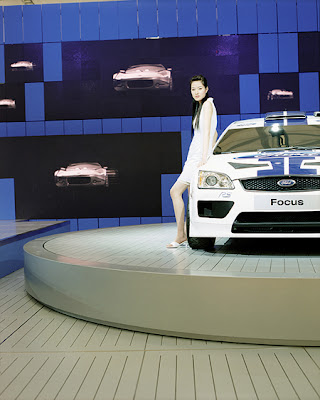 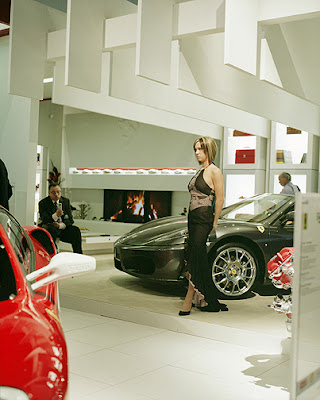 is a compendium of Jacqueline Hassink's work to date. Hassink's projects are a hybrid of documentary photographic practices, in which a specific subject matter is isolated and photographed, as a series (e.g. corporate board rooms, or models employed in car shows in various cities), and also the creation of systems for the information gathered, which is a practice which resembles systems-based methodologies of conceptual art - I am thinking in particular of some of Douglas Heubler's work, or the rigorous necessities used by Bernd and Hilla Becher. Hassink's work addresses information and discipline. Hassink's subjects as well are primarily corporate, on a global scale, represented by their built spaces, as architecture, decor, amenities. Perhaps a superficial resemblance could be made between Louise Lawler's work & Hassink - in which case I would say that Lawler's photos of art collections in private homes and offices pale considerably to the corporate super-structures in which Hassink places herself. The art collections Lawler photographed are but one of many decorative accents and investments in these citadels of economic power. Although the photographs are notably absent of people, for the most part, I can't help but think of Hassink by dint of persuasion, drive, research and intelligence putting herself in these privatized corporate power centers, going where there is no intention of any visitors, and leaving with her assiduous reports. While she seems entirely familiar with the worlds she documents, her role is still that of an investigative outsider. What Hassink photographs is particular to regions and cultures, but also global: corporations exist with their own borders.

In project-based books such as The Table of Power, Hassink documents corporate boardroom tables, along with salient information gathered in the making of the project. In this project there is a pun in the use of word "table" as it refers to the literal tables in boardrooms as well as the table of information that Hassink establishes in assessing the similarities and differences of each corporation, including the hospitalities extended or not to Hassink. The "table" also incorporates what could be considered gendered space, such as in the work Female Power Stations: Queen Bees, which documents both the executive boardrooms and private dining spaces of female CEOs.

Hassink documents female CEOs, as well in a continuation of the project which became Arab Queen Bees. Hassink also deals with gendered spaces which do not represent sexual equality but which reify more traditional roles in VIP Fitting Rooms, and in Car Girls, in which models pose before cars at car shows. The car girls are especially chilling in their robotic symbiosis with automobiles.

By dint of being a compendium of work, The Power Book forfeits the intimacy of Hassink's project-based books, but it is an excellent introduction to her work. Published by Chris Boot, who has published other books of documentary work in innovative forms, it includes facsimiles of Hassink's notebooks and descriptions of the projects. Hassink's work deals with information, which in sense can seem entirely pre-existing (does anyone need to go anywhere to know such things?), nevertheless there is a sardonic, intuitive intelligence applied to what one would associate with corporate reports. While not a documentary per se, Hassink's work makes new space for further inquiries.
Posted by One Way Street at 8:50 AM No comments:

vernacular photo(s) of the week 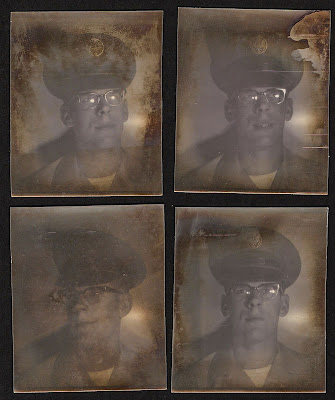 Posted by One Way Street at 8:01 AM No comments: