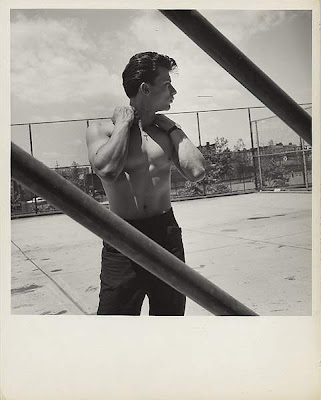 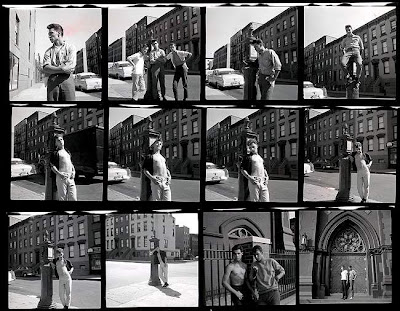 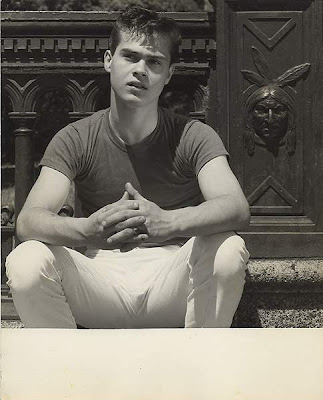 I would like to thank Jim Kempster and Bob Loncar of bigkugels.com for their generosity in sharing their photo collection. They have sustained histories that might otherwise be overlooked or forgotten.

Male physique photography exists on a periphery of other histories. Figure studies date from the early period of photography, such as images by Eugene Durieu made for the painter Eugene Delacroix. Popular mass produced images of the bodybuilder Eugene Sandow circulated widely at the end of the 19th century, and bodybuilding magazines were published as photolithography facilitated the circulation of picture magazines. Such magazines also were part of an expanding economy of consumption, a consumption presented as ideas of self-improvement. Charles Atlas reformed the 98 Pound Weakling in the back of comic books. Jack Lalanne exercised zestfully on TV with his large dog, proselytizing the benefits of strength & fitness: the media has been our mirror(s) of the ideal, the possibility of transformations. What would we look like if there were no standards set as such?

Looking beyond the expensive & lurid advertisements of Muscle & Fitness, there existed in this realm of men looking at men, a cottage industry of images circulated after WWII, through the 1970s, which although seemingly simply extolling the All-American Boy, were meant for a specifically gay audience, or to use a term Gore Vidal coined, "homosexualist." This was a pre-Stonewall gay audience. There were contant threats of prosecution for obscenity, which facilitated a very elaborate set of visual codes which could be within the letter of the law & yet in a way proclaim an outrageous level of fetishism and truly curious visual strategies. For example, Bob Mizer, the photographer & publisher of Physique Pictorial, which was produced in his mother's house in Los Angeles, would bring an array of his pets including a monkey & a goat into images, he would clothe the models as motorcyclists, prisoners, mechanics, sailors, Indians - his imagination was quite fertile & those who would be looking for "those types" of images would see "it" loud and clear. & I would point out a brilliant bit of DIY set-building of Mizer's: projecting lights through his mother's cut glass bowls to create artistic backdrops for his models.

There were physique studios across the US: The Athletic Model Guild (Bob Mizer's studio), Bruce of Los Angeles, Lon of New York, Douglas of Detroit, David of Cleveland. I am only including studios with place names, but is there any full account of such activities? Beyond small magazines and mail order images, this is a decentralized world - it belonged everywhere and nowhere. Some models became entrepreneurs of their images as well, such as Bob Delmonteque. & in a publication like Physique Pictorial, Bob Mizer inserted small typed commentaries which would offer observations of the models - the trials & tribulations of the work behind the scenes, which could include tart evaluations as well as sharp characterizations. Who stole. Who went to jail. & so on. In our much duller world of psychological readings this could be read as "co-dependent."

The modern gay liberation movement & perhaps more importantly the relaxation of obscenity laws changed the reception of modern physique photography. A Grecian column was no longer necessary for legal protection. The modern "artistic nude" could replace scenarios of wrestlers & boys soaping in showers with a higher level of taste & more explicit body parts. In school in Ann Arbor in the late 70s there was a magazine shop/5&10 near campus in which stacks of gay porn could be perused in the back. These magazines were hardcore - legally portraying "penetration" & "exchange of bodily fluids." There were still copies of Physique Pictorial available as well - later issues included full frontal nudity but still had a kitsch prurience which seemed anachronistic by that time, although a bit more street than a mainstream magazine - a lot of the models had homemade tattoos, & there were a series of symbols placed by the models which would make allusions to the models' sexual versatility, their status as sex workers, as well as notations of character & trustworthiness. If anything, one could say that there's been an expanding professionalism in the pornography industry. If one were to compare the magazines found in the back of the Blue Door on S. State St. in 1977 with a Jeff Burton mural print on display this summer at Casey Kaplan titled, simply, "At Herb Ritts" for example.

I have been very fortunate to see a portion of a very sizeable collection of photos put together by Jim Kempster and Bob Loncar, which includes work dating from the 19th century as well as what seems an encyclopediac collection of physique work - AMG, Bruce, Kris, Lon, Douglas, et al. Their devotion & their excess of hundreds of images shames me with my own dilletantism regarding the subject. Also they showed me a set of work by a very obscure photographer who worked in Bay Ridge, Brooklyn, whose moniker was Les Demi Dieux (sic). At present it does not seem like the real name of Les Demi Dieux is known. His images were published in Young Physique & The Demi-Gods but are not included in any histories such as F. Valentine Hooven's book Beefcake which was published by Benedikt Taschen, or the academic book by Thomas Waugh, Hard to Imagine. The images of Les Demi Dieux are remarkable for being a precursor of later "artistic nuded" but still having a distinct "trade" look. Unlike most such work, the darkroom skills of Les Demi Dieux are very strong, & there is more attention to overall composition. Les Demi Dieux worked with well-known physique models such as Richard Bennett, as well as a lot of local Brooklyn boys with greaser haircuts. As a point of curiosity, the few images which are signed, are signed by the models rather than the elusive Les Demi Dieux. & he had no blindstamp either, as far as I can tell. The most remarkable images are of shirtless or nearly shirtless boys on the streets of Brooklyn - the Brooklyn in these photos is an empty city. Unlike classic physique images which catalogue gym work - measurements, body mass, in conventionalized poses, the Brooklyn boys look like dreamers in an abandoned city - there is a palpable romanticism. David Armstrong (whose portraits have some similarity to Les Demi Dieux) used to joke that he wanted to teach a class about male photography called "Buns and Baskets." It is a recurring idea for me, but I can't help but wonder that there are many more collections out there like Les Demi Dieux. Perhaps another salient point is such images still do not circulate in a public way, or at least in a very limited public way. They have little currency as art or culture, and yet there is still a healthy audience for the work.
Posted by One Way Street at 8:05 PM