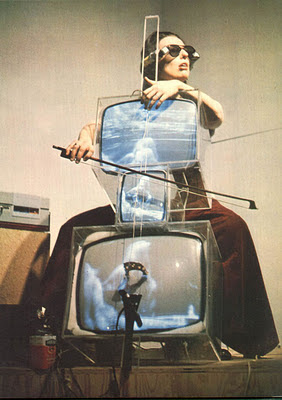 The proximity of my studio in Olive Tjaden Hall next door to the Johnson Museum of Art has led me to frequent the museum fairly often, whether for getting soup during the week at the 2 Naked Guys Cafe in the lobby, or simply to loiter with or without intent.

The Johnson is a relatively new museum, opening in 1973. Cornell University had no centralized art collection until the organization of the Andrew Dickson White Museum in 1953, which was located in the A.D. White House, now the home of the Society for the Humanities. The A.D. White Museum grew into the Johnson Museum with the support of alumnus Herbert F. Johnson '22. The Johnson is a small but spectacular I.M. Pei design, a small concrete tower on the north end of Libe Slope, with views on all sides. The view north towards Cayuga Lake over the thick trees of Cayuga Heights & beyond being particularly pastoral & picturesque.

I.M. Pei's design is notable on several levels. For a concrete tower, with a bunker-like aspect, it is also paradoxically light & airy. There is a 3-storey sculpture deck on the 2nd floor which floats above Libe Slope, with views towards the Arts Quad & the original buildings of the university: Morrill, McGraw & White Halls. The best views are at the top of the building: the 5th floor Asian galleries which has views on all sides & the 6th floor conference room, which has a wall of window facing north to the lake. The galleries vary considerably in size & proportion, which also influence one's experience of the entire building: it seems much larger than it actually is, there are a lot of different kinds of galleries. Such variety expands one's sense of the place.

With the recent expansion completed, some of the existing spaces have been retrofitted, in particular the Asian galleries on the 5th floor. Included in the Asian galleries is a space for modern & contemporary art, which are currently installed with 2 Nam June Paik videos. Yesterday morning I watched Global Groove (1973) which I hadn't seen in several years.

At the risk of dating myself, I had seen Paik in the past at Anthology Film Archives, and even earlier, once I saw Charlotte Moorman, which was as exciting as when I saw Yma Sumac perform at a tapas bar/piano bar in Chelsea, years & years ago. In our virtual world it now seems kind of impossible - a flesh-&-blood encounter now seems moot, likewise both Paik & Moorman now fall into a purgatory of history. Paik's videos look utopian in what is now our hellish conflation of technology & capitalism aka the internet.

The ebullient silliness of Paik still seems potent to me: What is best about television is the ability to change the channel, randomly, & that is what Global Groove is like - going from one thing to another with a kind of hilarious velocity.

If there is a dark side in Paik, it is in the credits: Global Groove was made in conjunction with an experimental television workshop in Binghamton. Now all that (the idea of experimental television, Binghamton as something more than the depressed town it is now) seems lost. Although we still have the specter of tap dancers, John Cage, Charlotte Moorman, et al to remind us of better things.
Posted by One Way Street at 4:11 PM No comments: