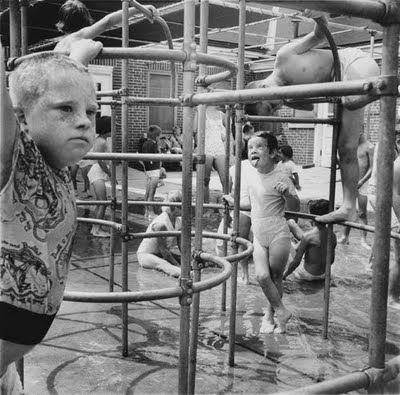 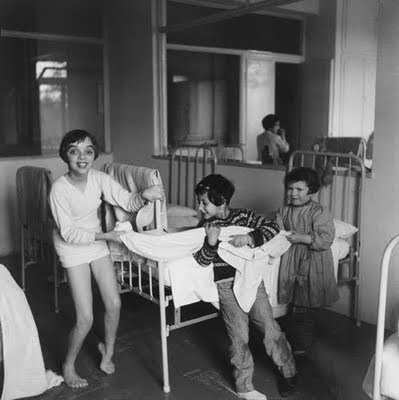 The current show of Peter Hujar's early photographs, dated 1956-1958, at Matthew Marks Gallery, convinces me (not that I really needed to be convinced) that Peter Hujar is one of truly great photographers of our time. "Our time" may be a bit porous - these images are now over 50 years old, & Hujar died in 1987, but perhaps his "time" is now & in the future. My suspicion is that there is much work that has never been seen, like the images in the show, which I do not think have had much circulation.

The photographs are of what are now referred to as "developmentally challenged" children. One of my students, who accompanied me to the show, asked, "Are these special needs students?" These terms are bureaucratic & with all good intentions, more inhuman than any pejorative term in their sentimental but airtight classification. It's language which acts as a placebo for the speaker, absolving the speaker of having to say much else. The Hujar images predate a very well-known body of work by Diane Arbus of the same subject, by about 10 years & have some structural similarities (square format, black-&-white). The Arbus images are rightly famous for their moodiness, their sense of isolation & incarceration. Peter Hujar's images have a very different emotional tenor in what could be seen as ebullience, anarchy & a very deep sweetness. Both bodies of work were done in institutions - institutions for those who would be classified (using the volume titles employed by August Sander for his planned books of portraits) as among "The Last People." Such institutions also function as as a kind of container for society, hiding away its defective members. The intrusion of a photographer in such a setting has many possibilities, such as a journalistic narrative of whatever stripe. What distinguishes both the Arbus & Hujar portfolios is their media-uselessness. Why? What for? The photographer in her/his naked voyeurism shows a curiosity & suspension of judgment which allows for multiple readings of the subjects & their images. We can't look at the photos & know automatically what to think.

Peter Hujar's photographs resonate with me so strongly. Everyone I know thinks he's great, so I feel a bit presumptuous saying this, but he appears neglected in histories & anthologies. His photographs of animals are as strong as his portraits. His photographs of nighttime streets are as erotic as his nudes. Hujar's work is permeated with mortality: I hesitate to describe his work as morbid, despite the many photographs of dead animals, or the photographs of the catacombs in Palermo, or a portfolio I saw once of the tableaux of the long-gone Wax Musee at Coney Island, which was primarily of serial killers in action (I remember Richard Speck strangling a nurse, in particular). Or the portrait of Candy Darling in her hospital bed. Or the portrait of Edwin Denby just before Denby died. Nevertheless in such finely wrought forms I think there's a strong sense of corporeality: Flesh has its own life, whether it is a waddling duck or the enormous cock of a nude boy.

Estimations of mortality are written out of a lot of current photographic discourse. The photographic is understood more in semiotic terms, or as a cultural product. Hujar's photographs are more like a 17th century memento mori image: a Dutch bouquet in which in such splendid beauty there is the beetle & the worm, slightly hidden, the slight but advancing wilt, with their intimations of passing.

I try to discern: what are my favorite Hujar images? The list just extends - it is a useless prospect. I hesitate to use the word "classic photography" to describe his work, which evokes more formal black-&-white images of western landscapes or abstractions of natural forms done with The Zone System, yet Hujar is part of such a former photographic world. Hujar's work can be classified in very traditional terms: portraits, nudes, cityviews & landscapes. But the work is intense & immediate which undermines its great formality. Hujar's work is imbued with a remarkable moral sense: the same level of carefulness goes towards both a woman passed out in his stairwell on 2nd Ave, or a portrait of Miss Peggy Lee. I am also reminded of this in his portraits of the elderly Edwin Denby or Lotte Eisner. I have little reference to Hujar's psychology, except in the work, which is perhaps a more ideal way to contemplate anyone's creative endeavors. One hopes that at some point there is a truly great book of this work, in all its scope.
Posted by One Way Street at 9:22 AM No comments: