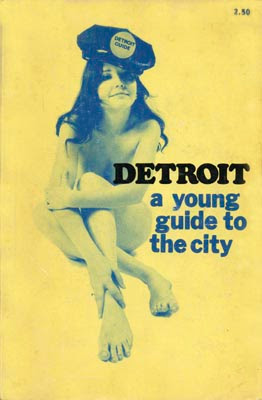 Detroit and Los Angeles may currently be neck and neck for the contest of most reviled American city, recently replacing the New York City of the nineteen seventies as Middle America's impressively enduring idea of Hell. Having lived in both the rust belt necropolis and the Pacific pomopolis, I can attest that Los Angeles is Detroit through the looking glass, or in a phrase that went through my mind continually as I drove under endless ugly sodium lamps from freeway to freeway on first moving here, it's "Detroit with palm trees."

Now that New York has become a suburb of the suburbs (a line stolen from my dear paramour Jeremy Blake) it is left to Detroit and Los Angeles to battle it out for the honor of embodying America's fevered unconscious. Detroit and L.A. are each industry towns where citizens not involved in the main product are an afterthought, viewed primarily as seat warmers for the new Chevys or the latest giant Loews Cineplex, respectively. Culture is an afterthought in both towns, both are known for a subgenre of noir fiction, and both are emblems of sprawling urban nowheresvilles where no one can hear you scream.

And yet I find both places indescribably glamorous, inchoate and mysterious, endlessly strange and iterative, as if the street behind you is being covered over with some new fantasy by scene painters as you drive on. I'd go on to parse out the differences between the towns, but as I said, I suspect they are actually the same place, two sides of a coin palmed in the alternately icy and desert-hot hand of America, a future currency whose buying power is for strange new fast-moving forms and fantasies that are as yet undreamt of in the rest of the West...

A pro-Detroit city guide from the 70s as recently blogged at detroitblog, below:

America's ugliest city Detroit runs East St. Louis a close second. As America's unfriendliest city, Detroit has no peer. One reason for this is that no one in Detroit is outside for any length of time. They are always inside: inside a home, an office, a car. If you don't know people to start with and are not willing to put out the extra effort it takes to make friends in Detroit, chances are you still won't know people when you finally decide this is not the town for you. It is easier to meet Detroiters anywhere other than in Detroit. There's one standing in line next to you in every American Express office in the world. They drive past you on the San Jose Freeway, grinning, honking and pointing at their license plates. Why, Detroiters are some of the friendliest folks in the world. Unless you're stuck in Detroit.
Posted by One Way Street at 12:29 PM