An artist has offered to donate his own head to an Oxford museum - if a collection of shrunken heads has to be returned to South America.

Ted Dewan has written to Oxford University's Pitt Rivers Museum to offer his own head for shrinking.

Museums have been facing an ethical debate about whether they should keep human remains on display or repatriate them for burial.

But the museum has now turned down Mr Dewan's offer of a replacement head.

Children's author and artist, Mr Dewan is offering to leave instructions in his will for his head to be shrunk and put on display, if the Oxford museum's current collection of 10 heads from the Upper Amazon region has to be repatriated.

Mr Dewan says that he hopes that any posthumous display of his head would have a "family friendly" appeal.

"I shall also leave enough funding specifically to cover the costs of storage, shrinking, curating, and maintenance of the shrunken head in the Victorian display case," says Mr Dewan.

"Perhaps the case could be relabelled Treatment of Dead Benefactors," says Mr Dewan - who has assured the museum that he is serious in his intention.

But the museum has rejected the donation saying it "cannot be a place for accommodating a request such as this, whatever strength of belief lies behind it".

The museum says "however, we hope to continue to see Mr Dewan, alive and well, at the Pitt Rivers".

Mr Dewan had told the museum in his letter that returning the shrunken heads would mean losing its "most awe-inspiring collection of artefacts".

And he says that burial plans are a serious issue for people who do not want the trappings of religious or civil ceremonies - with the museum representing a sacred place where he would like his remains to rest after death.

"The Pitt Rivers Museum is a wonderfully inspiring and Holy place for me... Being an ethically sensitive institution that honours the belief systems of indigenous peoples, no matter how obscure, I'm sure the Museum would not discriminate against my belief system."

Museums and universities have been debating the ethics of whether they should continue to display or retain human remains - with calls that this shows a lack of respect for many native cultures from which the remains were taken.

The Pitt Rivers Museum's shrunken heads, held in a case entitled Treatment of Dead Enemies, were examples of how Amazon tribesmen took their enemies' heads as trophies.

The anthropological museum holds more than 2,000 human remains, including 300 skulls - and as with other museums, it says it has been debating how such items should be displayed.

The Natural History Museum in London has recently agreed to return the remains of a number of aboriginal people from Australia and Tasmania, collected by the museum in the 19th Century.

This museum alone holds almost 20,000 humans specimens, including very ancient bones, with the majority of these items from the UK.

From Here to Infinity 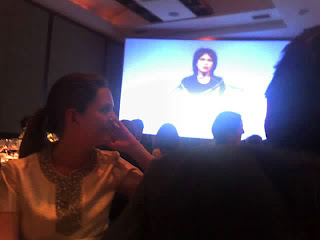 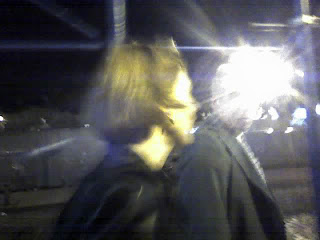 This year I was a nominator for the ICP Infinity Awards, which were held last Monday, May 14th, at Pier 60 at the Chelsea Piers.

Choices by the nominators are sent to 3 judges, the identities of whom are not revealed until judging is finished. Judges for 2007 were Francois Hebel, Charles Desmarais, and Mary Panzer.

In addition to the judged categories, special awards are given - this year those photographers were William Klein, Milton Rogovin and Karl Lagerfeld.

2 of my nominees were winners: Tracey Moffatt won for "art" & Ryan McGinley won for "young photographer."

Alison Bradley & I were seated at the McGinley table, which also included Ryan McGinley's parents, Amy Kellner, Marc Hundley, Jack Walls, and Sylvia Wolf. Ryan McG. was extremely nice, as were his parents. The table group was basically familial (even with Sylvia Wolf, the Whitney curator), except for us, although this is not to fault the group, for everyone was very warm & pleasant. I spoke mainly with Amy Kellner & Marc Hundley & they were wonderfully nonplussed by the ceremony. I recognized Marc from a photo taken by Jose Picayo of Marc & his twin Ian, when they worked as models; also Marc lives down the street from me in Williamsburg. After the awards Ryan invited me to a post-party at Black & White, a club in the East Village, where I went with Deirdre Donohue. Ryan gave us too many drink tickets which we exchanged for more red wine - in short, my evening leaned towards resembling the McGinley portfolios my students admire so much - !

During the nomination process, I tried to find a passage in one of Thomas Bernhard's novels about prizes & prize-winning. Given that Bernhard's late novels are often 1 or 2 paragraphs long, for hundreds of pages, I doubted my ability to find it. However, by coincidence, this AM, reading from a biography of Bernhard by Gitta Honegger, I found the passage from Wittgenstein's Nephew:

If one disregards the money that goes with them, there is nothing in the world more intolerable than awards ceremonies . . . They do nothing to enhance one's standing . . . but actually lower it, in the most embarrassing fashion. Only the thought of money enabled me to endure these ceremonies; this was my sole motive for visiting various ancient city halls and tasteless assembly rooms - until the age of 40. I let them piss on me in all these city halls and assembly rooms, for to award someone a prize is no different from pissing on him. And to receive a prize is no different from allowing oneself to be pissed on, because one is being paid for it. I have always felt that being awarded a prize was not an honor but the greatest indignity imaginable. For a prize is always awarded by incompetents who want to piss on the recipient. And they have a perfect right to do so, because he is base and despicable enough to receive it. . . . When I received prizes I did not have the excuse I was suffering extreme hardship or that my life and existence were threatened; hence by receiving them I made myself not only low and contemptible but positively vile, in the truest sense of the word . . .

The photos are by Deirdre Donohue, done with her cell-phone camera. I shot film, color negative, in my Yashica T4 - the same camera that Ryan McGinley has used, it turns out. When it is processed & scanned I will add to the blog.
Posted by One Way Street at 2:29 PM No comments: