Leon Levinstein at the Metropolitan Museum 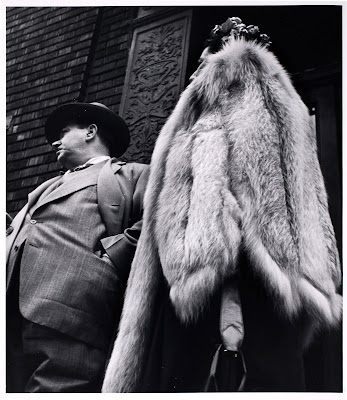 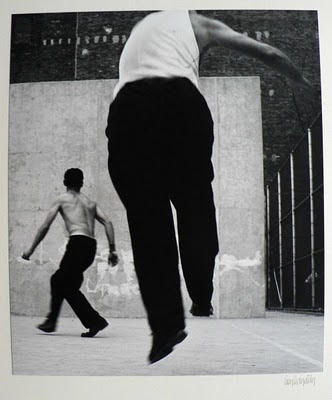 A gift of a large collection of prints by Leon Levinstein is the basis for a very intriguing summer show in the Howard Gilman Galleries at the Metropolitan Museum. Levinstein's images appear in anthologies about Coney Island, or vintage (post WWII) street photography in New York, but never in a way that foregrounds his work. One image in particular, a very modernist composition of the back of handball players in the Lower East Side, which has an almost Bauhaus formality to it seems to be the most reproduced, but it gives little indication of the salty character studies which distinguish his images, primarily. The modernist compositions can seem related to the lightning-reflexes of someone like Henri Cartier-Bresson, also the sense of the image passing into a scarily iconic passage which can also border on morbid caricature. & yet unlike Cartier-Bresson in which the remarkable composition seemingly unearthed by the camera has a redemptive, essentialist "Family of Man" aspect - the same skill set in Levinstein's hands reveals a much more misanthropic & isolated social perspective.

Levinstein is much closer to the likes of the Poe story The Man of the Street: looking at others in puzzlement which leads to a journey which reveals nothing, ultimately. A wild goose chase into unknowing. This kind of forlorn &, in 20th century terms, existential confrontation with other-ness is perhaps the ultimate theme of most post WWII street photography. The chaos of the streets, the lack of solution, as it were, for what seems random, endless & jarring, is both the horror & appeal of such work. The closest equivalent I can think of is the work of William Klein, but even Klein has an ecstatic aspect in his expressive printing methods & his dynamic book designs, whereas Leon Levinstein presents a portfolio which reverberates with loneliness & despair, with little redemption beyond that. Perhaps a torso or butt which may excite some erotic intrigue, somewhat. The most appealing (if one needs the images to be appealing) aspects border on figures which may or not be of a somewhat outlaw nature. Levinstein worked from the 1950s through the 1970s & one can see social aspects which are almost nonexistent in pre-1968 street photography: hippies, bag ladies (one of the sickest moments in 1970s pop culture were the cretins who made postcards of NYC bag ladies as comical gross figures), inter-racial relations which would have had a different emphasis before the civil rights movement, figures outside any normative formations - no one in his images is ordinary looking yet all seem utterly an everyman or everywoman.

One can see a pre-gentrified New York City in Levinstein's images which now can read as much nostalgic as they could be conceived of as harsh. Glimpses of this can be seen in films such as The Panic in Needle Park (which was at 72nd & Broadway!) & Serpico. This "olde" New York is always in black-&-white. It reached its apogee in William Klein, Diane Arbus, Sid Grossman, Weegee, Peter Sekaer, Rudy Burckhardt, Helen Levitt, Walker Evans, That's such a small list - there have been recent historical shows such as "The Women of the Photo League" exhibit put together by Kim Bouros at Higher Pictures last year which reveal much wider practices at hand, & a future task for the photo historian.
Posted by One Way Street at 5:19 PM