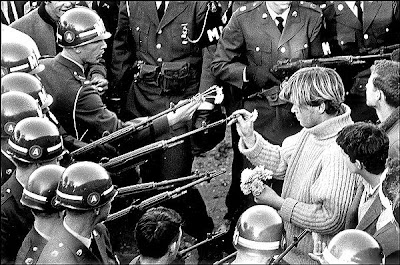 One evening in the mid to late 1980s (I cannot date it any more precisely than 1986-1989) with my friend L., we went out with her childhood friend, Andy Sherwood, visiting town. L. & Andy had gone to the Grace Church School & the Friends Seminary on E. 17th St. They grew up in lower Manhattan in the late 1950s, early 1960s, which from their descriptions sounded like an entirely different city (L. mentioned running away from home & renting an apartment on Avenue D for $13/month).

Andy had relocated to Paris where he taught harpsichord & he also did some photography. Andy knew my friend C. in Paris. C. left NYC for Nicaragua in 1985, returning to Paris in 1986. Andy detested C. & told me so in emphatic tones, which is how the evening began. "Do you really like this horrible person?!"

Andy took L. & me to a loft on Washington St. in the West Village where a couple, the Harris' lived. They had a theatrical background. On the wall there was a poster for The Angels of Light, which was led by their late son George. The poster for The Angels of Light was from a small theater in Paris, the Theatre Campagne-Premiere, which by coincidence had been owned by my friend C.'s father, Andre. George & Ann Harris mentioned that they were owed money by the proprietor of the theater, which, after the circumstances of my earlier conversation regarding C., I did not mention this further connection to them.

Also framed on the wall was a photo of a boy inserting a carnation into the barrel of a rifle held by a National Guardsman. The boy in the photo was the Harris' son George in 1967, outside the Pentagon at an anti-war rally, before George relocated to San Francisco & incarnated himself as the performer Hibiscus.

My memory is rough about this, but I think George may have modeled at some point. There were numerous photos by L.'s friend Andy of young George in the house.

I hadn't thought of the "flower power" photo in quite a while, but it came to mind reading the blog Amber Waves of Brain.

& then, today, 2 days later, Phyllis Levine, "Communications Director" at ICP, where I work, brought in a luscious print of the Pentagon photo from her archive (the photographer's name is Bernie Boston) for possible identification as no one in Exhibitions knew it. The image is not obscure by any means - it was a nominee for a Pulitzer Prize after it was published in a newspaper (the Washington Star), but it brings to mind others, such as a similar image by Marc Riboud.

While I do not have a belief in a greater significance to coincidence or of a secret cosmic order, these immediate serendipities were still somewhat reassuring: I can appreciate an apparent trace of order in what usually seems random & disconnected. It brought back lives I & others have lived, lost worlds & fragile connections.

& it brings to mind the weird potency of photography, how it embodies both the known & the unknown it its stimuli; it shows us something we didn't see & will never be able to see directly, except as a photograph, &  that experience can permeate our memories, or as Siegfried Kracauer would term it, replace them.

Outside of such harsh reckonings, I can admit a kind of succor in such technological fantasies - found in blogs, websites, magazines, newspapers & paper archives as much as my memories. & while I cannot cite Hibiscus with any authority, what a splendid figure to invoke this week.

My friend S. died this week after 6 years of struggling with cancer. S. was a rebellious character - in the hospital her sister said, "I don't know why she didn't teach fighting - she was certainly good at it - " in consideration of S.' past as filmmaker, photographer, performance artist, writer, teacher, & a non-denominational minister (I'm not quite sure what that means). I think of S. as primarily a teacher & her relentlessness in it - she also taught up until a few weeks ago, getting around with a portable oxygen tank.

S. made the daily papers in 1987 when she climbed the Berlin Wall & took photographs from that vantage point, getting arrested by the Germans. The Berlin Wall itself was not that large physically - what was massive about it was the constant policing it required.

I first saw S. in the mid 1980s when I worked at Film Forum when it was on Watts St. & S. spent a year living in the window at Sohozat which was 2 blocks away on West Broadway, just above Canal. I didn't know her then - we met years later. I recall joking to another friend, in crisis about looking for a place to live, that maybe when the window at Sohozat was unoccupied . . . I never saw any of the films S. made with Kate Millett. There were rumors as to what those included (nudity, sex). S. did a partial reenactment of the Sohozat window in the window of New Museum, as part of the Martha Rosler retrospective held there & at ICP - in this case it became a home office.

In the hospital the other day, while S. lay in a coma, a minister from the hospital came into the room for last rites. The minister was shooed away like a nasty pest; instead a friend of S. enacted a ritual w/ healing waters, which we all passed to one another in a circle, making faint streaks on the palms of each other's hands, while someone else read from a book of anti-war poetry from Vietnam from the 1960s.  The ejection of the hospital minister had a comic aspect otherwise absent in the room as we all sat with S. as she expired. The healing waters & anti-war poetry were also hard to take. It made me aware that even in a group I would be mourning alone.

Climbing the Berlin Wall with a camera does not seem dissimilar to the carnation stuffed in a rifle. How lucky we are to have photos of such acts & to have had any encounter w/ those who would do such things.
Posted by One Way Street at 12:23 PM