Housed at the Alice Austen House 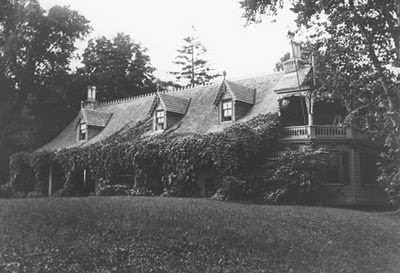 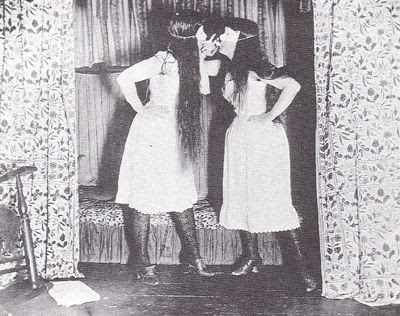 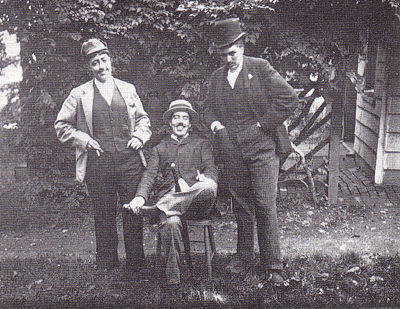 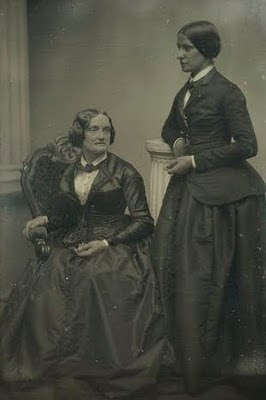 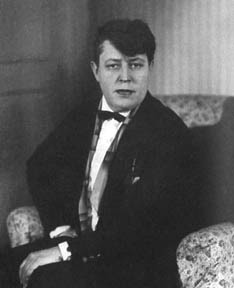 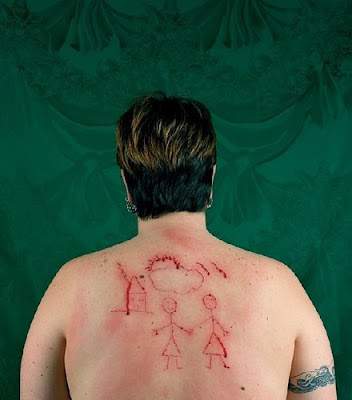 The Alice Austen House in Staten Island is the former home of the Victorian photographer Alice Austen (1866-1952), which had belonged to her family & which bears the name Clear Comfort. The house was built initially in the 17th century but was updated through the mid-19th century. It is a "gothic cottage" on a lawn sloping down to New York Bay, just north of the Verrazano-Narrows Bridge, which links Bay Ridge, Brooklyn, with Staten Island.

The Austen house is absurdly pastoral & quaint in a city not usually known for such aspects. I walked from the ferry terminal in St. George, which took about an hour, & passed through different communities as well as strip malls, industrial areas & areas of such oblique nature I was reminded of the Rem Koolhaas essay "Junkspace."

At the end of long lonely industrial street I walked there was a short fence & sloping lawns & trees & in the midst there sits the white clapboard house, smaller than I expected. The ceilings are low, & the rooms are kept as a museum of Alice Austen's everyday, although Austen in her lifetime lost her family money in the 1929 stock market crash & died in 1952 in a poor house, called the Staten Island Farm Colony. Austen lived with her companion Gertrude Tate (1871-1962) in the house from 1917 until they were forced to move.

The discreet tact of the term "companionship" between Austen & Tate, the impossibility of knowing its exact nature, yet seeming quite clear as a loving relationship (unconsummated old maids? or a Boston Marriage?) informs a very sweet small show of photographs in the house for the summer, entitled Housed, curated by Joseph Maida & Katie Murray. The two key images in the show are a modern print of an Austen image of 2 girls in masks, lighting a cigarette together, dressed in underwear, which is next to a contemporary image by Catherine Opie of a drawing of a house with 2 stick figure women outside it, cut into her back.

There are thousands of negatives extant from the Austen estate. Many of the images are reportage of Staten Island & New York City. Austen also photographed private events. The images are a curious window into times past & unknown social circles. The images are remarkably candid. I find the party images the most interesting as they show a great deal of spontaneity & also a very direct engagement w/ the camera as a thing, as part of a social practice. Most fascinating of all are her staged images, which the masked girls could be considered part of, as well as a series of Austen & her girl friends dressed as men & posing as such. These are remarkably earthy & casual & seem much more modern than studio portraiture or art photography of that time.

The very subtle exhibit, Housed, touches on the idea of the "home" as a kind of private theater of shifting identities & perimeters. In addition to the Austen & Opie images, the other resonant image for me in construing a theme for the show is one of Peter Garfield's images of a destroyed house flying in the air (falling, I am assuming, like the house in The Wizard of Oz - or in the context of the show, a conventional house rent from its foundation, spinning in the ether). Or perhaps it is Peter Stanglmayr's fashion photo of a "girlie-boy" - a very pretty androgynous boy posing for a knitwear company's catalog. These images all show both a sense of an imposed social order & its transformation, for whatever needs that may arise (& these can remain oblique even if they seem very apparent). This is an invigorating show in a truly wonderful setting. All of us at the opening, sitting on the porch w/ a cooler of chilled rose (thanks to Peter Stanglmayr), with people playing badminton & croquet on the lawns, while ships passed in & out of the bay, below - we all commented that we wanted to live there. The Austen house is truly cozy. I found the house such a generous site & so lovely. It's something to think about. A refuge in the general storm of life.

The simultaneous visibility & invisibility of the Austen/Tate household reminded me of other such examples in the realm of photography. There are remarkable images of the actress Charlotte Cushman by Matthew Brady and Southworth & Hawes which are of remarkable gravity & presence, as strong as any of the other "great Americans" photographed by either firm. What is also apparent is Cushman's self-possession & lack of "feminine" mask. & in the 20th century, while working as a portrait photographer in Paris, Berenice Abbott photographed a remarkable array of "Sapphic" characters from the upper classes & artistic spheres. Abbott herself would not associate herself with lesbian feminist groups in the 1970s when approached for support (& also a sense of historical continuity) - despite her long-term household with the photo historian Elizabeth McCausland. I have heard the same of Djuna Barnes, who is the same generation as Abbott, & also a subject of remarkable photographs by Abbott taken in Paris in the 1920s. & the writer I knew in the 1980s, Marguerite Young, by then elderly & outspoken, would nevertheless deliberately obscure her sexual orientation & in fact criticize others (I recall a conversation in which Iris Murdoch was referred to as a bull-dyke, in an emphatically pejorative moment, & she would use the term fairies to describe some men, while always surrounded by a coterie of gay friends).

My former student L., who defines herself emphatically as a "butch dyke," would say "My kind are invisible, but it's not like we're not there." While not quite a contradiction of the inequalities & prejudices of the world we live in, the Alice Austen Houses of the world show us a much more diverse planet, nevertheless.
Posted by One Way Street at 9:29 AM