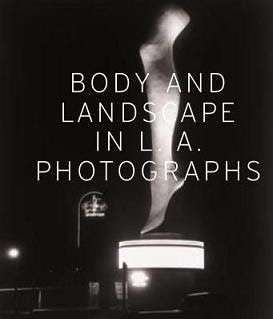 is an ambitious photography exhibition and catalogue from the Huntington Library in San Marino, of images of the city of Los Angeles.

Curated by Jennifer A. Watts & Claudia Bohn-Spector, the exhibition is culled from archives kept at the Huntington, such as from the Southern California Edison archive, the Maynard L. Parker Architectural and Garden archive, the “Dick” Whittington Studio archive, and the Verner Panoramic Negative archive, as well as an array of artistic imagery, from early 20th century pictorialism, such as early work by Edward Weston, then working in what is now Glendale, as well as Arthur Kales and Edmund Teske; followed by great modernist photographers like Max Yavno and Julius Shulman, up to contemporary artists - Lewis Baltz, Ed Ruscha, Lee Friedlander, John Baldessari, Robbert Flick, Tony Hernandez, Catherine Opie, Larry Sultan, Karin Apollonia Muller.

Last night on the L train I ran into B., who when I mentioned I would be going to Los Angeles next month for a visit said simply, "I never got LA - do you like it?" This reminded me that growing up in the Midwest, one would eventually go either East or West. I think if I had gone directly west to LA from MI I would have found it noxious, a weird sunny pleasure-dome of the same world I was leaving, a car culture, living in a kind of eternal present moment. LA had seemed too easy to disparage - where one lived on the surface, through creature comforts & luxury items; one lived through things, most notably the automobile.

After 27 years in NYC, such an artificial paradise now seems much more desirable. Is it not just the difference, but the distance? A question for me would be: where do I want to grow old? But also, my youthful indifference to Los Angeles has been transformed into a much stranger, more complicated fascination.

A great source of pictorialist imagery of Los Angeles was in Touring Tropics, a magazine published by the Automobile Club of Southern California. Advertisement & Art have many correspondences in LA. If one were to cite film as "THE art of the 20th century" one can see a perfect synthesis. Image becomes an industry. Los Angeles exists in its sprawling glory as speculations on various dreams made manifest.

Los Angeles is a huge city, pulled out of desert sands, like a mirage. Along with its boosters, its civic fathers, its exploiters, there has been a remarkable literature by an oppositional chorus, as it were - Louis Adamic, Nathanael West, Raymond Chandler, Joan Didion, Mike Davis, Norman Klein - to cite only a very few. Writing Los Angeles: A Literary Anthology (Library of America)

is a great introduction. & I can't recommend enough, as a source of ideas about Los Angeles, as well as about film Los Angeles Plays Itself by Thom Andersen. The Andersen film mixes forms - fiction, documentary, high, low - a strength which can be also be seen in the show at the Huntington. "Los Angeles" was not necessarily the ostensible subject of most of the films cited by Andersen; yet he examines all for a kind of documentary of the imaginary.

Looking at the catalogue I might cite some personal misses - more pictorialism, or something more directly about John Entenza's Arts & Architecture magazine - but this is a minor not quite issue, given what I think is the erudition of the show. A more tangible critique would be with the poor quality of the printing of the book - but given the texts & the images, we still get the idea(s).
Posted by One Way Street at 6:25 AM