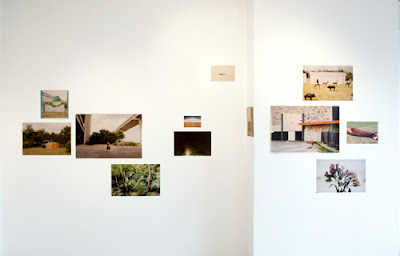 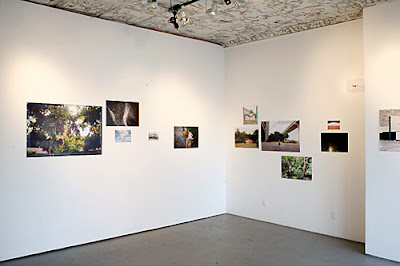 The photographs are presented in different sizes, unframed, pinned or taped to the walls. Mixed in as well are collage pieces using record album covers as templates, which show a more explicit comic abstraction. Citing formal considerations as the guiding principle in relating otherwise disparate images to one another (e.g. Harry Callahan, John Szarkowski), which would indicate a disregard for subject matter, organizing by virtue of physical correspondences, the images are nevertheless quite full of "subject" even if unstated: what emerges is a cosmology which is both abstract and homey, cool yet earthy. The "unfinished" quality of the prints and the arrangements relate to the photo album as much as the gallery wall. Such ersatz randomness also shows a vivacity and willingness to experiment that is lively, intelligent & stimulating. It makes us aware of the potentialities of new meanings that can be generated by the rupture & suture of disparate images - a kind of proto cinema, or dream state. I told Barry that while I regret we lost him from the tenements of north Brooklyn, it seems he's found a lot more to photograph, where he is now.
Posted by One Way Street at 10:19 AM