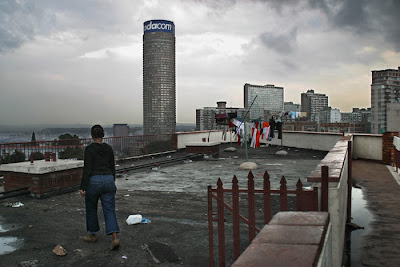 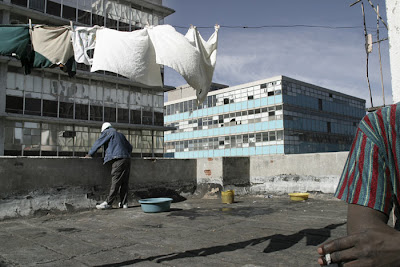 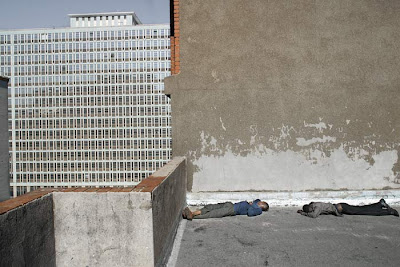 In the past year I attended a lecture by the architect Peter Lang at the Miguel Abreu Gallery about the Stalker Group/Osservatorio Nomade's work with a public housing project on the outskirts of Rome, the Corviale, which is 958 meters long. Corviale is a state-sponsored housing project built on the outskirts of Rome in the 1970's as part of a regional plan to alleviate crowding in the older central city. It was conceived as an independent community for about 8000 people including, in addition to housing, other community facilities such as schools, shopping, recreation facilities and even a church. Built on rolling farmland southwest of Rome between 1972 - 1982, it is now considered a failure & is known for its high crime rate and the poverty of its residents. The enormity of the structure has also resulted in an ad-hoc "customization" of its spaces by the residents, including its own television station - such adaptations are the subjects of the various projects initiated by the Osservatorio Nomade.

Also, in this past year, in a group show I participated in, "Weak Foundations" at Momenta Art, I attended a slide lecture by Robert Neuwirth, who was another participant in the show, and who is the author of a book about squatters' communities in Rio de Janeiro, Mumbai, Istanbul, and Nairobi, Shadow Cities: A Billion Squatters, A Urban New World

. Robert Neuwirth is also a neighbor - someone I recognize from the street, seen walking his dog; Neuwirth was a recipient of a Macarthur Foundation fellowship for his work on Shadow Cities.

Just as the Osservatorio Nomade studied a community/structure which is an official failure, yet has fostered communities which have evolved independently of state policy, Neuwirth's book examines squatters' communities which have developed their own infrastructures anterior to official policies. Both these lectures come to mind as I bring up another document which enters in a dialogue about urbanity, Guy Tillim's Jo'burg

"Jo'Burg" is the colloquial form of Johannesburg, South Africa - similar to "B'klyn" for Brooklyn, New York. Jo'Burg, the book, is a small accordion book of photographs taken in 2004, of an impoverished class of people occupying decaying buildings in the center city of Johannesburg, the economic center of South Africa. A photojournalist, Tillim has used a book structure associated more often with artists' books. The most notable example of an accordion book is Ed Ruscha's Every Building on the Sunset Strip. Many of the buildings have been abandoned and/or condemned. Johannesburg's blight resembles the abandonment of US industrial cities in the 1970s, however with a population which has moved into an evacuating city, formerly white-only under the policies of apartheid, only to face imminent evictions and dislocation. Johannesburg appears much more a menacing and entropic labyrinth - a Blade Runner with all the businesses gone.

The images follow one another like cinematic frames - images of abasement and struggle, in a sordid maze of modernist urbanity. The small size of the book facilitates an intimate viewing of the pages, very unlike a standard photography monograph. The book begins & ends with panoramic images of Johannesburg from the roof of a hotel - the first image facing north, the last facing south. The images are not linked the way a conventional magazine photo story is laid out with a clear beginning, middle & end, however there is a sense of sequentiality in that the last images are of police & evictions - thus tracing a more generalized path for the residents of the city. The end papers of the book, in effect it's cradle, are a photo of a map of Johannesburg. Without captions in the shank of the book - the credits of the book include thumbnails of the images with brief terse explanations. The endpapers offer the lengthiest explanation:

A map of central Johannesburg at the Inner City Regeneration Project Office, City Council, Loveday Street. The pins indicate the different states of buildings as identified by the project: red indicates "bad buildings"; blue indicates "illegal use"; black indicates "finalised"; and yellow denotes Clause 61 (i.e. owners will be forced to repair the dilapidated facade of the building). There are 235 "bad buildings" in the city centre, with about 25,000 people living in them.

What emerges is a cycle of decay, abandonment and misuse which is orchestrated by a greater bureaucracy. Perhaps it is useless to ask: Which came first - urban decay, or its management?

The discreet artifice of Tillim's book amplifies & expands its subject. The poor & the abject are stock characters in photojournalism - at its worst play-actors for a white liberal bourgeoisie with a taste for "authenticity" & the horrors of this authenticity. Tillim deals with the people of Jo'Burg in a way which rather than implying a paternal empathetic identification, instead allows the differences between himself & his subjects to simply exist. The structure of the book expands as well into a great self-consciousness that a document, or should I state, "document" is being made. It denaturalizes the processes of urban decay & exploitation such that what appears is much more insidious.
Posted by One Way Street at 8:22 AM

damn it! i just found you via your latest post on 5b4, and now i'm never going to get any work done again.

i love the way your mind works, and this blog really makes me miss living at 146 s. 2.