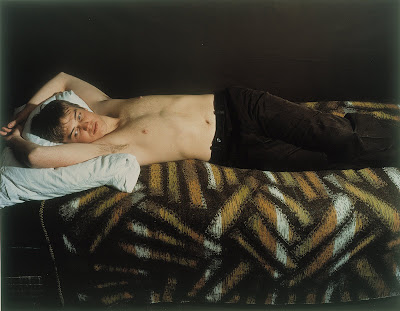 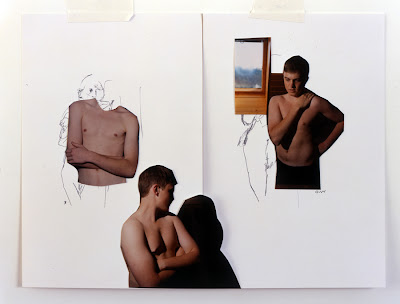 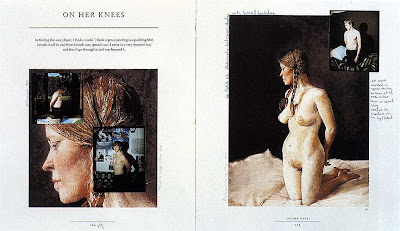 What became the book Jens F., by Collier Schorr, was first seen on exhibit in the 2002 Whitney Biennial. To quote Schorr: "The Jens pictures began as an experiment. To photograph a young boy in many of the positions that Andrew Wyeth painted the model Helga; to give someone another identity and photograph them through the transformation. Working exclusively in a small town in Germany, I was also interested in the impulse of Americans like Henry James, to travel to Europe in search of a certain 'privileged' landscape only in fact to insert an American inflection. The work evolved into a kind of dance between the two models, between painting and photography, between the exacting detail of photography and all the nuances of sketches and drawings. As a way of keeping track of all these images, I began to clip out the contact prints I liked and to paste them into a book."

Using the catalogue of the Andrew Wyeth Helga paintings as a template, the poses re-enacted, the soulful profiles, the hints of mysteries and concealments - but in a blue-skied, pastoral rural Germany, with an adolescent boy as opposed to an adult woman. In the work exhibited at the Whitney the actual Helga book was much more in evidence than in the published book - without pursuing this difference my guess is that in publishing a book which is using another book (and a well-known one) as its structure, an array of possible copyright lawsuits could be tendered. The Helga-Jens connection is not quite so obvious in the book, published by Steidl, however fragments of Helga do appear and clarify the connections. Another significant change in the published book from the art on the walls is the re-casting of other figures as Helga, as well, both male & female. Viewing either work is like entering a hall of mirrors, all becomes familiar yet elusive. The fragmentation of Helga/Jens could be compared to other cultural splits, such as the Madeleine/Judy character in Vertigo, or the portrait of Laura/Laura herself in Laura. The notebook format puts us in a methodology of similarities, incarnations, resemblances, resonances. The cutting & pasting & approximations are a process of discovery & investigation: Collier Schorr's working methods & ideas become the work, in contradistinction to a singular finished work of art. The work can be seen as both analytical and also passionate: the engagement of the work with issues of desire opens the issue of desires as a mapping or tracking of impulses. "Jens" is as much a construction as Helga - in fact Jens is several people, or more accurately, Jens is portrayed by several people.

I would also bring up that this is one of the sumptuously printed and produced artist's book I have seen. Gerhard Steidl's books are distinguished by strong production values, sophisticated printing. A lot of artist's books have been made on the cheap & utilize such limitations, whereas Jens F. represents a rapturous amount of largesse at the printing plant.

As much as Schorr's work seems to be about embodying ideas of desire, desire reveals itself more as a process than a finished image. Her methods recall the obsessiveness that can distinguish the simple act of looking & looking again & again, over & over. What are we seeking when we look at photographs? & what compels us to continue? Identity & gender are fluid. Obsession can also consider itself & its forms. Schorr's work has 2 distinct movements - one in pursuit, in following ideas of desire, its forms, & the other, static & contemplative, analytical - the forms are assessed in an almost anthropological manner.

I think of how different Collier Schorr's work is from historical photographic bodies of work that at least superficially deal with with "obsession" & "desire" (what commonplace words in art photography), such as Alfred Stieglitz's portraits (which number in the hundreds) of Georgia O'Keeffe, or Harry Callahan's photographs of his wife Eleanor. Stieglitz's images of O'Keeffe are always portraits. Callahan creates modernist compositions with Eleanor, even when the image emulates a snapshot, a domestic tableau. Or is Collier Shorr that different? Initially her choice of Wyeth as a template for cataloging desire seemed odd, almost kitsch. Andrew Wyeth in the NY art world seems a bit out of place. My uncle in Muskegon may think Wyeth a great artist but that's not a name I hear very often, otherwise. On the other hand, responding to desire is outside of taste as well - my harangues re Wyeth are really only about taste, nothing more (perhaps). This impresses me with what I perceive as a great independence of spirit for Schorr, of having a finer intelligence in navigating the structures of the busy world of images we live with, consciously or not, in the everyday.
Posted by One Way Street at 3:05 PM