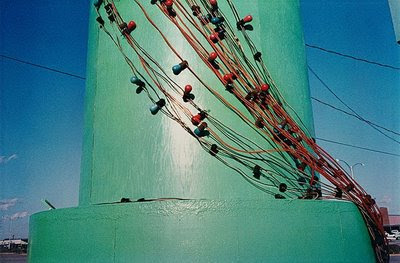 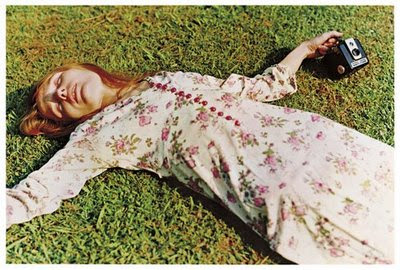 As much as I admire the work of William Eggleston, I am perplexed at my disappointment in the recent retrospective of his work at the Whitney Museum of American Art.

Arranged in a counter-clockwise arrangement on one floor, the work was arranged chronologically by its initial execution, from mid-1960s black-&-white prints, to the images seen in William Eggleston's Guide and Alamos, video work now edited & entitled "Lost in Canton," the 5x7 images recently published & exhibited at Cheim & Read, images from the books Election Eve, the Graceland guide, the Democratic Forest, and most currently some images from Kyoto.

Other than a few vitrines of early catalogs which include images by Eggleston, some less-than-finished c-prints (in contradistinction to the radiant dye transfer prints matted & framed on the walls) & the luxuriant privately published 2-volume Election Eve, there is little acknowledgment of the important role of publishing in Eggleston's artistic trajectory, as well as the role of John Szarkowski & the Museum of Modern Art in establishing Eggleston as a serious artist/photographer. These are mentioned, but in a negligible manner. Instead the viewer was offered a stream of luminous prints - albeit in itself an aesthetic feast - with little notation beyond that. Frankly, the curating of the show seemed minimal at best. Work was simply there, without much context. Also, what was not mentioned is the recent printing & circulation of images initially made in the 1960s & 1970s (the black-&-white prints, the 5x7 images & video). Instead the work was presented as a seamless chronology, without any notation as to the actual circulation of the work, which is much more erratic than such a timeline suggests.

I did get a perverse amusement in the installation of the video of "Stranded in Canton" which is anarchic & meandering & rather dark in its excesses: it is common practice now to bring small unruly uninterested children to museums, evidently to instill a sense of high kulchur in the tykes. & to see the numerous small children watch as a nude guy w/ long hair tries to shove a liquor bottle up his ass while screaming "This is LOOOOVE!" had its own special moment for me.

My guess is that Eggleston, like others of his generation & orbit (Lee Friedlander, Garry Winogrand) has worked quite a bit, in general, & the organization of the material, it's perimeters as a body of work, comes later. This is a practice outside what is taught in MFA programs, or the expectations of what an artist is supposed to justify in public. In the films of Eggleston he is almost maddeningly oblique in his insistence on the priorities of formal graphic qualities, while to our contemporary eyes, his images are loaded with content: class differences, race relations, commodity culture, history rendered in minutae of home decor, suburbanization, anomie, great introspection & also a sense of withdrawal from a teeming world. By the same token, Eggleston really doesn't have to say anything at all & if anything, he seems all the more refined for not doing so. Aside from his taciturnity in discussing his work, I think there is still a highly sensitive engagement with the images. & Eudora Welty (herself a wonderful photographer) wrote about him: why bother to add on to that?

Perhaps the great Eggleston show will come in future generations when there is no gallery or Eggleston Trust to intercede or dominate in any exhibition. It occurred to me that there was a similar occurrence with the Whitney 1995 retrospective of Richard Avedon, which was dominated by dictates & demands of the Avedon studio, likewise in the later show of Avedon portraits at the Met. Or the recent Met show of Diane Arbus which had a party line of intense hagiography if not downright fetishization of her everyday set-up (including a reconstruction of her darkroom with an eternal enlarger light on). There's something to be said for the non-interference of long-gone artists in terms of organizing shows about him or her. Otherwise it is more advertisement, more spectacle, more hokum for us to swallow, at best.
Posted by One Way Street at 6:43 AM