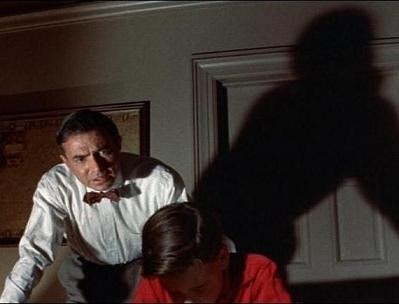 The plot of Bigger Than Life can be read in simple terms: A middle-class family in middle-America. The father becomes ill & his subsequent medication has psychological effects due to his abuse of said medication. Ultimately he collapses as a result.

Made in the 1950s, Bigger Than Life also seems a harbinger of our own contemporary controlled & medicated culture. Science in the home as inevitable future. Bigger Than Life begins with what seems an absurdly pastoral post-WWII domestic landscape of single-family homes & struggles for upward mobility & the values of thrift & education. In a technicolor oddly parallel with the palette of Norman Rockwell illustrations we see a home worked for & "succeeding" in its perfection. From this point on Bigger Than Life negates such a reading & turns such plastic hopes into a private hell resembling German expressionist films more than the pages of the Saturday Evening Post.

First & foremost is the casting of James Mason as a middle-class middle-American schoolteacher. He is an oddly aristocratic choice for such a role & brings to it a tragedy which can be seen in many of his other roles, from Odd Man Out to the remake of A Star is Born (in which he commits suicide!) to Lolita. His sonorous voice is impossible to separate from the darkness of the film - how else to give eloquent voice to the megalomaniacal speeches induced by his cortisone abuse? With his English accent and sophisticated manner Mason is a truly anomalous "everyman" for a middle-American suburbia, a potential for Nietszchian superhuman excess which translates to domestic evil.

The other characters, the dutiful wife, the colleague & best friend gym teacher-neighbor, & the son, look like stock characters, without much depth, in contrast to Mason's tormented character who has a choice of either medicated madness or death. The family house becomes a labyrinth of shadows & kitsch - everything in place & quite ridiculous, & also ultimately terrifying in its indifference, it's mausoleum-like perfection.

Entertainment can function as propaganda as well for dominant values, working as a mirror of ideals & values. How curious that Nicholas Ray could make such a dark film within a Hollywood studio system. My guess is it just seemed weird enough & also the exoticism of gloriously tragic James Mason as schoolteacher (also working part-time as a taxi dispatcher to make ends meet) to get made. There is a "happy ending" which is uncertain & equivocal & seems delusional.

Perhaps, paradoxically, Hollywood,a conglomeration of feudal corporations, in the 1950s could still produce work such as Ray's (Rebel Without A Cause, In A Lonely Place) & Douglas Sirk's Brechtian melodramas, & other films which could be read as subversive of dominant values (Elia Kazan's A Face in the Crowd, Vicente Minnelli's Home From The Hill), contra our now globalized economy in which movie studios are subsidiaries of larger companies & as such are controlled even more remotely & have the gravity of Coca-Cola.
Posted by One Way Street at 8:38 AM