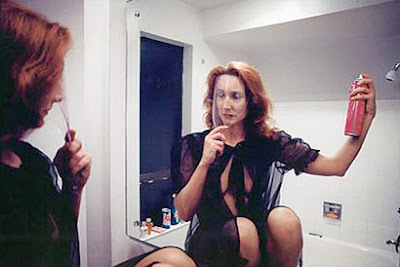 If the subject of the English novel had been society, that of the French narrative tradition the mind, that of the German school the metaphysical sensibility, that of Russian literature the soul, the central preoccupation of classic American literature lay in the mood and the psyche where it originates: the abrupt fluctuations and disturbances of people's perceptions of life and themselves, as vague as a malaise and as sharp as a gambler's hunch, the troubling traces of something that leaves many footprints but no trail, that is all clues and no substance, something people know as well and as little as they know themselves. Classic American literature springs from the illegitimate emotions possessed of a powerful dynamic but no stable content, the vulgate of the psyche where consciousness and unconsciousness find their life in symbiosis, a vulgate whose authentic self-expression must be, not in the constructs of a story or character, but in that most fluid and intractable of the narrativist's resources, language itself, a language pushed to deliver all its resources . . .
- Ann Douglas, Terrible Honesty: Mongrel Manhattan in the 1920s

Happy families are all alike; every unhappy family is unhappy in its own way.
- Leo Tolstoy, Anna Karenina (Penguin Classics)

Family as subject, "family drama," informs a diverse array of photographic books. I would also qualify the term "family" loosely to include those not necessarily blood relations, but also communities which structure both the intimate and the social. With such an expansion of definition, I would proffer 2 of the great post Vietnam photo books, Larry Clark's Tulsa, and Nan Goldin's Ballad of Sexual Dependency as examples of familial forms: structured by needs, drives, compulsions, articulated by narcotics, sexuality, & restless movement, movement which also seems a return. The family as conscious & unconscious community, the organization by which we understand ourselves and others.

Work such as Clark's & Goldin's, with its specificities & privacy, bears some relationship to the vernacular family album, as opposed to high art practices, in its inscribing of the noteworthy, the important, but it breaks with the dominant aesthetics of the album in its self-consciousness, its anti-aestheticism. The album is meant to reaffirm and reproduce the family, not to question it. The work of Clark, Goldin, & other remarkable books, such as Chauncey Hare's Interior America, Danny Seymour's A Loud Song, and Larry Sultan's Pictures from Home (& one could pursue this with a much more extensive list of work) interrogate their subjects as much as act as an immersive experience in it.

Leigh Ledare exhibit & book, Pretend You're Actually Alive is primarily about his mother Tina, identified in a magazine page from her youth as a dedicated, beautiful ballerina. Like a memento mori, the specter of the past with promises of talent, ambition, loveliness, is contrasted with a disappointed, chaotic present. It is almost a cliche: Beauty fades. In the more horrible & all too real present the mother is now an exotic dancer, a sexual provocateur, & it's a hardscrabble existence.

What distinguishes the Ledare work from a journalistic "expose" such as Susan Meiselas' Carnival Strippers, or the camp burlesque of films such as Mommie Dearest (Special Collector's Edition)

, is a complicity between Ledare and the mother in the images: She is an active, performative model, remarkably open with her physicality - her body, her sexuality, her ability to transform herself (for whom? the camera? her son? a john? herself?). A one-note reading of the work, which could be misconstrued as a scenario from "dreams" to "failure", is baffled by the complexities of the work as a whole, its ambiguities.

In our age of (hypocritical) propriety, the mother disturbs us as a sexualized image, in the frank use of her body as work & destiny. The bond becomes palpable if not downright emblematic of the son's sense of his own sexuality - as images of himself & girlfriends are edited into the narrative flow of the pages. I can't think of any work which addresses the claustrophobia of familial relations so directly in terms of the body & sexuality.

There are others present in the book, either in image or word (not necessarily both some we never see) - the mother's parents, the mother's boyfriends or dates, another son unseen but mentioned, Ledare's girlfriends (also a young wife?). Much of this is vague, which balances explicitness with some discretion. Family dysfunction is demonstrated in fragments of writing by both Ledare & the mother. Multiple narratives emerge. I was fascinated by what seems to be evidence that the mother is a serious hoarder: of clothes, jewelry, things. & there are various schemes to earn money, which inevitably fail or at least are never mentioned again. The mother emerges as a chaotic figure, yet compelling in what seem to be endlessly shifting energies. In the course of the book the grandmother dies, there are allusions to bankruptcy proceedings, there is a disabling car crash. These are all pieces of a puzzle which is never quite complete - again this may be a relief. The lack of definition has some redemptive aspects as much as the chaos invokes an endless labyrinth.

What is also remarkable about the book is its tenderness, a near laconic drama of what in description reads as perpetual trauma. There is a great deal of drama per se in the book but it emerges in fragments - notes, allusions, unseen presences. The photographs exist outside the narrative at times, even as they illustrate it, ostensibly. There is a sense of play-acting in some of the photos, which indicates another perspective of "the story."

The theater of the mother's performances, the costume changes, her multiple roles fills houses, literally it seems (more of that stuff that seems to be everywhere): the family is transformed to backstage wings, it is tucked into various closets & trunks, or left on the floor somewhere. I know of nothing quite like the images of the mother naked, displaying her sex, also tarted up in high heels, lingerie, makeup. Or some images which are obliquely somber. Perhaps the inventory of images of the Comtesse de Castiglione (whore, queen, nun, lacemaker, etc.)(La Divine Comtesse: Photographs of the Countess de Castiglione (Metropolitan Museum of Art Series)

) may be the closest. In one image in particular the mother is wearing a rhinestone tiara, touching herself with a rhinestone wand - a fairy tale princess run amok. We also see the mother still in her tiara, performing oral sex on a boyfriend. The mother presents herself in multiple roles, but primarily a romantic figure, a professional beauty, a wronged figure, an improper rebellious character, someone consistently inconsistent.

The family, in the books of Seymour & Sultan, for example, exists as a more-or-less solid corporate structure to which the parents conform. Both Seymour & Sultan examine their immediate relations as well as larger social relations. There is a sense of distancing, of critical evaluations in this. Ledare's book, with its multiple stores of maddening dysfunction is lacking in direct sociology even as it includes a very detailed array of economic hardships & necessities. There is as much economic as psychological instability in this book. It is precisely in these fragments, in the incomplete cataloguing of obliquities, in its emotional vacillations, that I find the strength of the work.
Posted by One Way Street at 6:56 AM