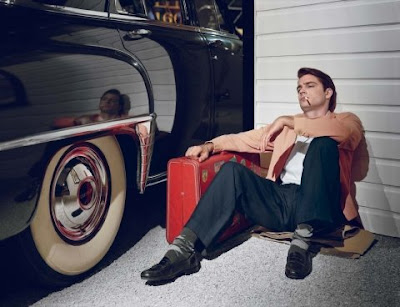 Detroit, 1958, is a series of color photographs by David McDermott & Peter McGough currently on view at the Nicholas Robinson Gallery on W. 20th St.

The name Detroit is an allusion to the location of where the photographs were made, at the Henry Ford Museum in suburban Dearborn. The date, like the mysterious dating of much of McDermott & McGough's work, like the "location" is a poetic principle, setting a tone for the style of the images, a post-nuclear consumerist car culture. The Henry Ford, in addition to its industrial collections, also possesses a cut-away of a room of one of the first Holiday Inns, soda fountains, gas stations, signage, & the only existing prototype of Buckminster Fuller's Dymaxion House.

The carbro process used by McDermott & McGough is most commonly associated with the work, both commercial & artistic, by Paul Outerbridge - lush, unnatural, bright. Like Outerbridge's work, it is difficult to distinguish what is meant to be advertising or what is meant to be artistic. Such ambiguity is destabilizing in the images of McDermott & McGough in that initially one can look at them in an all too facile manner, as one would turn a page of advertising in Life Magazine. A pastiche of advertising photos such as those by Ralph Bartholomew Jr., the images seem quaintly retro, nostalgic, almost cute. What is curious about the work of M&M is that with such old-fashioned, generic visual strategies a queer narrative emerges - looks of longing pass between sweetly wholesome teenage boys, intimations of longing, desire, jealousy, possession, loss - imminent melodrama (this is a middle-American version of what becomes the teenage drama of Rebel Without a Cause). Sites such a malt shop or a service station become sites of illicit desire. The car itself becomes a mode of transcendance - distance, speed, movement, romance. The static nirvana of the post war teenage never-never land, all of it in gorgeously modulated plastic colors, becomes heated with all sorts of unstated desires. To find longing in the commercial & generic, in the pure product, has been a method to reclaim desire from what is otherwise a void, whether the desire be fragmentary or unfulfilled.

The images are immaculately rendered - the attention to detail, the absolute lack of chance which is a hallmark of advertising is also symptomatic of a general uncanniness. Like still-lifes under a glass bell, in perfect stasis, a sense of unruly yearnings & passions emerge as barely controlled. There is a great deal of wit in the images, which could very well "pass" among those ignorant of said desires, who could follow instead the semiotic narratives of the art direction, or the formal or stylistic aspects of picture-making. There is a facility to the over-familiarity of the images which do not necessarily give one reason to pause, however if one does, the readings become a bit more complicated. My one disappointment is not crucial to the work at all, which is the use of some truly particular items in the museum in a generic, iconic matter. The Dymaxion House, for example, is used for a living room scenario, with a young couple in the background, foregrounded by a stern female figure with cards & cigarettes. The Dymaxion House is hardly an example of middle-class domesticity. Or the back of the bus from Montgomery, where Rosa Parks refused to move, becomes a much more innocent farewell between a boy & a girl. Again, neither of these items in their specificity has any import to the work at hand; why am I disappointed?

The strategy of appropriating a period "look" to create a narrative is not new. Offhand I can think of the early work of Laurie Simmons, or Nic Nicosia, or the more contemporary work of Gregory Crewdson - itself a pastiche of David Lynch's films, which are a pastiche as well of Hollywood domesticity (gone awry)from the 1950s & 1960s - films directed by Nicholas Ray, Douglas Sirk, Vicente Minnelli, for example. Still, I would locate M&M's work more along the lines of the extraordinary book by David Deitcher, Dear Friends: American Photographs of Men Together, 1840-1918

or in the longing in vintage songs heard on the car radio - floating ether like in the blankness of our streets.

We'll sip a little glass of wine
Honey, I'll gaze, I'll gaze right down
Into your eyes divine
I'm gonna feel the touch of your lips
Pressing on mine

Then I'll hear you whisper low
Just when it's time to go
Cherie, honey, I love you, so
That's my desire
Posted by One Way Street at 11:29 AM