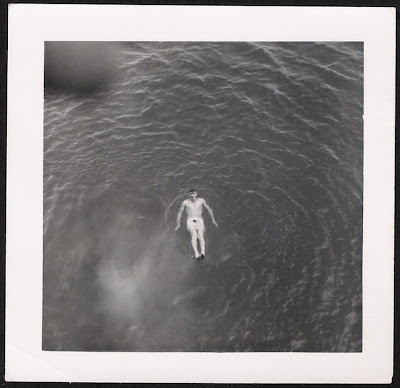 What is vernacular photography? Too broad to be understood as a genre per se, it can encompass anonymous snapshots, industrial photography, scientific photography, "authorless" photography, advertising, smut, as well as work that might be perceived as "other" than any of this random list. It could be understood as an oppositional photography - outside technical or artistic histories, yet, especially with the snapshot, it could also be entirely conventionalized, a manifestation of visual banalities, or an image so enigmatic that its meaning or genesis is entirely obscured. It is mistakes & failures as much as it may not be. & how we understand the images may or may not be separate from their initial intents. Is this a category we are making up?

The idea of the vernacular in photography is also an indication of photography as a medium informing the everyday, prevalent, "naturalized." An august photographer such as Walker Evans, working primarily in the 1930s & 1940s, collected postcards & signs; his work in particular addressed the issue of authorial anonymity - itself an "anti-art" strategy after decades of pictorialism, Camera Work, and other photographic practices which emulated high art forms of the time (the Pre-Raphaelites, salon painting, Symbolism, Decadence). A question comes to mind: is there a recognizable Evans style? While Evans has created a very distinct body of work - Cuba, Appalachia, New York, Chicago, Victoriana - is there a style that predominates? Could his images be recognized as an Evans image without his name attached?

The Surrealists, in various publications (La Revolution Surrealiste, Minotaure, Documents, among others) published images both authored & anonymous. News photographs appeared with artistic endeavors. The automatic, industrial structure of the camera was understood as a parallel with the nervous system, triggered by psycho-physiological impulses. One could even make a case for Eugene Atget, published by the Surrealists, as well as ultimated collected & canonized as a master of photography by the Museum of Modern Art, as a vernacular photographer. Atget's work was a vast archive of images of Paris and outlying areas - images sold from a humble street kiosk as aide-memoires for artists, or a possible souvenir. Atget's self-effacement as an artist/photographer in lieu of a vast archive. Atget's work could be seen as a precursor to the work of Evans, or Berenice Abbott, as well as in the work of Bernd & Hilla Becher. In all of these disparate bodies of work the camera functions as a mechanical recording device, an industrial eye. With such disparity in mind I can't help but think of it also being the crux of what John Szarkowski wrote of as being "photographic."

& yet the photography I want to discuss is also far from the canon of the photographic established at MoMA, far from the pristine & posh galleries of Chelsea, & far from artistic manifestos. In the case of snapshots, the deity is George Eastman, a brooding capitalist who envisioned a vast amateur market for photography, for profit. & out of these industrial products scavenged bits of the personal & the particular have been culled out of silver, celluloid & corporate anonymity. & industrial photographs, from the factory, laboratory, advertising agency, school, corporation, or news agency - vast piles of images floating around now bereft of their original purpose. 2 very brilliant books from the 1970s address the ubiquity as well as the obsolescence of images: Wisconsin Death Trip, by Michael Lesy, and Evidence by Mike Mandel & Larry Sultan. Lesy's book in particular is a mournful examination of the "reconstruction" of the past, of historical understanding in lieu of recording technologies such as news stories & photographic archives. Evidence by Sultan & Mandel pieces together disparate images which create a nonsensical narrative or sequence. In either book, the photograph, as trace of the past, as hard "evidence" as it were of whatever, a thing or event or process, reveals less than is seen. One could cite Siegfried Kracauer's essay "Photography" in The Mass Ornament, in which the photograph replaces memory - in this case ultimately losing its sense as well.

In a relatively early published collection, American Snapshots, collected by Ken Graves & Mitchell Payne, published by the Scrimshaw Press, 1977, the introduction by Jean Sheperd emphasizes in a rather condescending manner the folky artlessness of the family snapshot, but also a statistic from the Polaroid Corporation is cited: that that year a billion photographs were made. The title of the Graves & Payne book also indicates that the snapshot is a shared venture, among private folk, & that the experiences are in a sense universal: We all share our Kodak Moments.

Beyond such quaintness Pierre Bourdieu's book, Photography - A Middle-Brow Art, examined the sociology of the amateur photographer in terms of economics & class. Published in 1965, Bourdieu examines the meaning of the possession of a camera, as a relatively luxe technological toy, & the concept of the artistic photographic & photographic "appreciation" as level of taste which functions to distinguish the bourgeoisie from the working class. Certain aspects of Bourdieu's book have dated: It was written before the advent on the market of inexpensive Japanese SLR cameras which broadened the photographic market in the West, & before the 1970s photo "boom" in general which could be ascribed to the influx of cameras & amateur market materials, as well as a wider base of collectors, and a growing institutionalization of photography by museums & universities. Still, it is a sober estimation, in the midst of a lot of gift books & cute items. Bourdieu's estimation of photography as a technical aide for self-actualization & fulfillment for a skittish, unsettled bourgeoisie may be as salient a point today as it was in 1965. Perhaps because of its academic nature it did not have the impact of a more general interest book such as Susan Sontag's On Photography, at its publication in 1977. While hardly incendiary in its estimations of the photograph, Sontag's book garnered a great deal of hostility when it was released, especially within photographic communities. Public symposia were held at Pratt Institute, the Corcoran Gallery, and the International Center of Photography to discuss the rancor invoked by On Photography. Sontag's scholarship does not seem to be at issue, at least publicly, but merely Sontag's lack of photographic credentials, her outsider status as a public intellectual, saying what's what to those who do do it. Such a situation indicates the relative inbreeding of photographic interests at the time: what other media would cringe at such publicity? In more traditional artistic cultures, the critic is more often courted rather than reviled.

As photography has been more assiduously collected by museums & galleries, its canon of masters has grown, following traditional art historical models. Photographic practices are often not accountable within traditional artistic forms, however: Vernacular photography & the snapshot are such "outsider" practices, which are now tentatively entering the Academy, as well. How this is done, & what is presented is of great variety & I can't help but wonder that the variety can only increase as more shows are curated & books are published.

In 2000, the Metropolitan Museum presented a show of vernacular images by Thomas Walther which was subsequently published by Twin Palms Press as Other Pictures. Walther's collection of modernist photography is well known; the pictures of "other pictures" shared some attributes, in terms of compositions, forms, subjects, with a canon of great photographers - but also by dint of chance & mistake & miscalculation, seemingly (we don't really know after all). Light leaks, blur, fingers obstructing lenses, double exposures - all could enter into an aesthetic arena. This was a very beautiful show; one could also wonder that such collections really become about the tastes of the collector/curator more than any history could encompass.

The San Francisco Museum of Modern Art mounted 2 exhibitions with catalogs in 1998: Snapshots - The Photography of Life from 1888 to the Present; & Police Pictures: The Photograph as Evidence. Douglas Nickel's essay "The History of the Snapshot" is a succinct introduction to the snapshot & its marketing. The historian Geoffrey Batchen curated & published Forget-Me-Not: Photography & Remembrance. Batchen has written about vernacular photography, among the essays collected in Each Wild Idea. Another remarkable exhibition/catalogue is Snapshot Chronicles - Inventing the American Photo Album, at Reed College, curated by Barbara Levine & Stephanie Snyder.

In contradistinction to practices such as at MoMA, in which vernacular photographs are places in a high art context, these exhibits present vernacular work precisely as that, & that status is the focus of study.

Currently at the National Gallery in Washington on exhibit is The Art of the American Snapshot from 1888 - 1978, from the Collection of Robert E. Jackson. This is the largest collection I know of being exhibited, & is presented chronologically. The catalog is fairly sumptuous. Again, I can't help but be struck - what is on exhibit is as much about the eye of the collector, the collector's impulses, as it is about a photographic form. The Walther collection seems an ancillary of his larger collection. The Jackson collection is much more methodical & historicizing in its classifications. Nevertheless both deal in what are ultimately unique images. The history of the snapshot can be collected in a seemingly endless manner.

Or has the snapshot seen its historical moment? With the advent of digital imagery, what is going to end up on the curb, in the shoebox, at the flea market? What will be abandoned? Will we see any images leftover from our times? I tell my students that photography is about loss, about death, about time - the scraps we call vernacular photos are the ruins of their technology. The "birth" of the snapshot is ascribed to 1888, with the introduction of the Kodak camera on the market. To speak of the "death" of a form is too portentous & heavy, but I can't help but think of the historical moment really being over, too.
Posted by One Way Street at 6:31 AM

Dear Bernard
Allow me to thank you very much for your beatiful weblog. Very entertainig, It's amusing and educating me. The way you write is nice crispy and clear. I'll will keep following it.
(Some of the pictures I did use for my own weblog. )
Thanks.