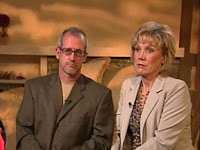 A Minister Admits His Addiction to His Wife

Sheryl and Paul Giesbrect are preparing to celebrate their 26th wedding anniversary. The sweethearts cherish their life together, which began when they met while attending a Christian university.

It's where they found religion and each other. Today, Paul is a minister in California and Sheryl broadcasts spiritual messages. Both counsel troubled couples, but now they find themselves in need of counseling. Their marriage holds a secret, one the 50-year-old parents of two say rattled their union.

For 10 years, Paul kept the fact that he was addicted to Internet pornography a secret from Sheryl.

"The temptation will be with me until the day I die," Paul said.

Sheryl was shocked by the revelation. "I said something like, 'Well, that's just disgusting.'"

To help themselves and their marriage, the Giesbrects met with psychoanalyst Bethany Marshall. They allowed ABC's "Good Morning America" to watch them for their first time on the opposite side of the couch.

The sessions yielded surprises from the start, like how often Sheryl dwells on her husband's obsession.

She said she spent two hours a day thinking about it.

"I thought you were going to say five minutes a week," her husband said.

When Marshall questioned Sheryl on what she thought about specifically, she admitted wondering about how often her husband was tempted.

"She questions whether their lovemaking will be enough," said Marshall.

"I feel angry about it. I can't say, 'Well, this is your problem. Do something about it,'" Sheryl said.

Marshall said Sheryl couldn't hold other people responsible to fix her marriage problems, "because you're not healing him. You're feeding into the addiction."

Thrill of Getting Caught

Sheryl said her husband was great at sneaking around and wondered whether the rush of it had something to do with the situation.

"I thought her comment was interesting, kind of  her part of the game is, 'I'm going to catch him, and he's going to sneak around,'" Paul said. "I think, definitely, on the Internet, is how close you get to someone walking in."

Paul said part of the thrill came from wondering how quickly he could change the screen before almost getting caught.

"Well, that was within, you know, a millisecond, and you know, you get kind of a rush off of that."

Despite his problem, Paul has been open, even discussing it with his congregation. But Marshall is concerned that spreading the word isn't helping Paul, but hindering him by indulging his obsession.

"When people have serious addictions, they enjoy talking about them," Marshall said. "You are struggling with an addiction and you're getting everyone else to think about it."

She said addiction was what's afflicting the marriage. "It's not just the sex addiction, it's the accommodations."