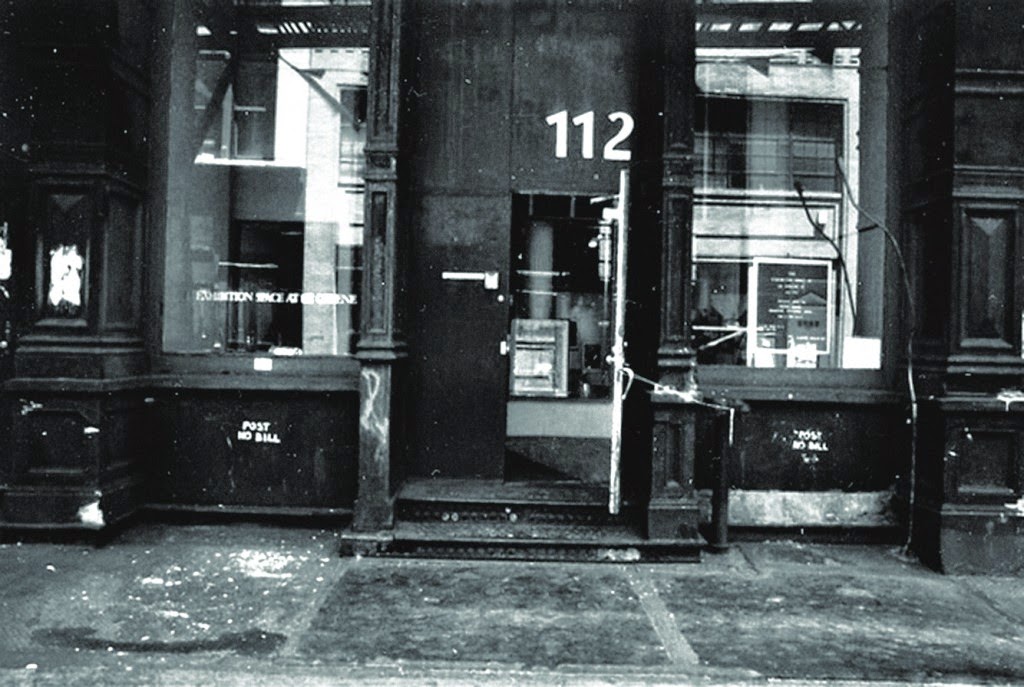 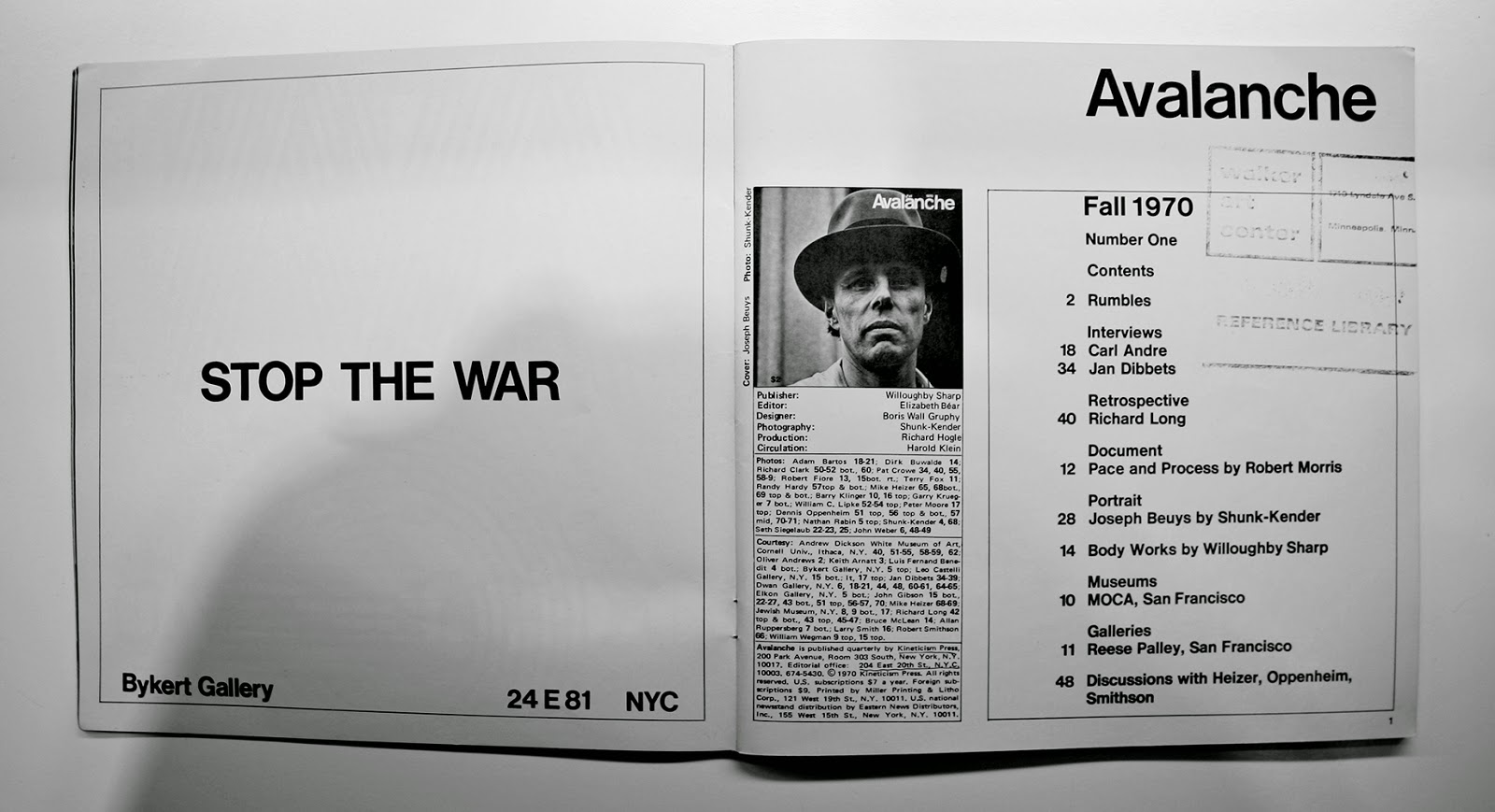 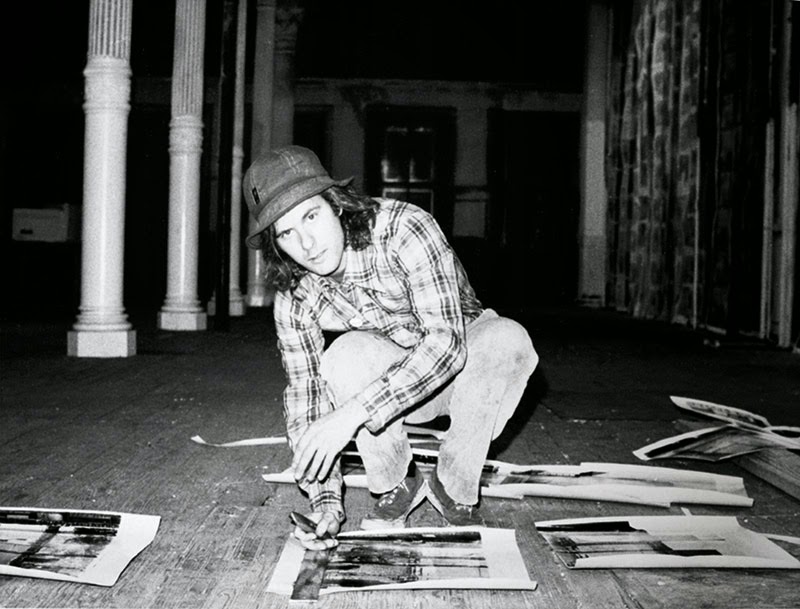 Telling people unfamiliar with New York City about the chronic intensity of real estate upheavals in the city sounds like madness. I try to emphasize to these strangers that it is a shared madness and as such engages or even mobilizes, in part, a community, although it is likely that means little for those unfamiliar with the fray of the day-to-day of NYC.

Along with the endless morphing of New York City dwellings, which in our day exceeds the bright cynicism of "where the rich get rich and the poor get laid off"another curiosity is in the changes in art discourse over the past decades, much of it in reference to the work of the creative classes in NYC.

In contrast to the ersatz academics of much of the contemporary art press, there's a considerable contrast in reading old issues of Avalanche magazine, for example, which was published in 1970-1976 by Willloughby Sharp and Liza Bear. It was a forum for artists by artists, who refer to to one another as "Bob" and "Jim" and use language in a plain, jocular tone, throughout. If there's a model for "the artist" in these pages it's as someone who is more of a working class hero than part of a global elite. Artists then could occupy the residue of a bankrupt city's shrinking industries, where fabric scrap warehouses and sweatshops had filled nineteenth century lofts that were more David Copperfield than Williams-Sonoma, more Ms. 45 than Architectural Record.

In an interview for the catalog of Ends of the Earth: Land Art to 1974 held at MOCA, Willoughby Sharp discusses the founding of Avalanche in relation to the 1969 show Earth Art that Sharp curated for the A.D. White Museum at Cornell University. The catalog for Earth Art was published a year after the exhibit, and it offers a very slim view of the scope of the exhibit. The first issue of Avalanche ends with "Discussions with Heizer, Oppenheim, Smithson" which are also part of a symposium that was held for the exhibit. Without belaboring the history of the Earth Art exhibit, the frustration of a group of young artists in relation to the slow machinations of a large research university which played a reluctant host to them led to the renegade pages of Avalanche.

In concert with a magazine like Avalanche there was the founding of an artist-run space in Soho, 112 Greene Street, run by Jeffrey Lew, which was the subject of a recent exhibition at the David Zwirner Gallery and an accompanying catalog, curated by Jessamyn Fiore.

The catalog for 112 Greene Street is another amazing telescope view into another New York City, so different from the one we live in now. 112 Greene Street operated from 1970-1976 as an artist run space. The "end" for it occurred in an oblique way: it began to receive government grant money and as the recipient of these funds a more business like bureaucratic structure became necessary. 112 Greene St morphed into the non-profit White Columns which still exists.

Many of the artists involved with 112 Greene Street moved on to other things in their lives. The most well-known of the artists involved with it was Gordon Matta-Clark, who by coincidence, had been an assistant to Dennis Oppenheim in Ithaca for Oppenheim's projects for the Earth Art  Show. Matta-Clark's migration from Ithaca to the then wild streets of Soho was a trajectory for many, as can be seen in the profiles of the other participants. Vito Acconci and Richard Serra had some involvement with the space as well, which surprised me. There is a hippie-ish cast to a lot of the projects which is overlooked somewhat in the retrospective surveys of Matta-Clark and others. Words such as alchemy and magic are invoked, instead of entropy and dystopia. It leads me to wonder how much that work would look if it were made now. The scale is also localized: there was no active market for these people the way that the market exists now, as a barometer of failure or success. Nor was it meant to travel the world as part of a global network.

A great companion to the 112 Greene Street catalog is Gordon Matta-Clark's film Food, of the restaurant he founded with Carol Goodden and Tina Girouard, who were both involved with 112 Greene as well. Food also functioned as a kitchen for the artists of 112 Greene Street in a then underpopulated and service-deprived lower Manhattan. In reading the bios of many of the participants there are a lot of trajectories outside of NYC: upstate, New Mexico, California, and so on. It makes one realize that the upheavals of living in New York City are part of its psyche as well as its leases.
'
The other night I walked by the address to see what it had become. In November 2014 it is the site of a Stella McCartney boutique. What next?