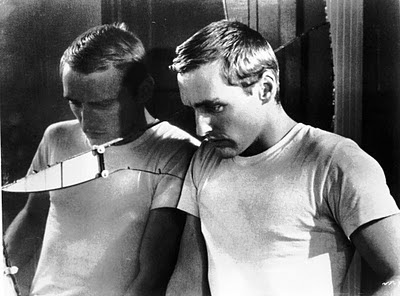 The cult of actors has been an irritant for me. In the mass media they have been avatars for the exigencies of daily life, surpassing the anonymity of most folks at such a melodramatic height that we're supposed to think it is somehow special. Besides finding it meaningless, it is also a distraction. One forgets one's own position in such a dynamic.

Besides the macabre aspect of actors seen as real as they pantomime reality w/ their reported daily lives, I am also interested in their utter uniqueness in a technological culture - would they exist without tabloids & now the internet? While I can covet the CDVs or cabinet cards of Sarah Bernhardt or Edwin Booth - I can appreciate their reality as a kind of cultural fantasy. & Hollywood as factory of illusions has produced an array of equivalents, along with appropriate shadows, such as Kenneth Anger's volumes of Hollywood Babylon I & 2. But why do I find it otherwise so irritating & useless?

As far as marking the death of the actor Dennis Hopper, what comes to mind primarily for me is his role in the Curtis Harrington film Night Tide, released in 1961. I first saw Night Tide in my adolescent outlet of, under various titles, The Late Late Show, Scream Theater, Thriller Theater, etc on late night TV. Before the advent of cable TV, or into its first years, cheap horror movies found a time equivalent in late nights for the melancholy insomniac, including my teenaged self.

Night Tide, in retrospect, includes a panorama of what would be interests for me: B-movies, lounge & exotica music (a performance by Chaino), the literary supernatural (one could argue the references including both Poe's The Oval Portrait & Goetbe's The New Melusina), allusions to Hollywood satanic cults (the inclusion of Marjorie Cameron in a small but emphatic role), the louche, beatnik culture of LA (keeping in mind the satirical estimations of Caroline Blackwood), the hyperreal aspects to California culture (going to the Madonna Inn in San Luis Obispo followed by a day at the "Hearst Castle" thanks to Umberto Eco & Karen Pinkus), as well as the supreme erotic aspects of young smooth tight Dennis Hopper who may or may not be consumed by a monster from the deep.

Night Tide gave me a taste of what I would encounter later w/ much delight in the formerly tawdry aspects of Coney Island, as well as tolerance for the extremes of the occult (as well as a skepticism of such). In a way not dissimilar from 19th century German romanticism - the cult of the ruin & the fragment, the object which would transverse time & space in an uncanny way, is all too familiar in this cheap B-movie nostalgia.

Speaking of Coney Island, I am reminded of the years I spent reading there. Going to & fro from the subway, & then on the boardwalk. This was a Julio Cortazar phase - translations of The Winners, Hopscotch, & innumerable stories. We Love Glenda So Much comes to mind in the context of the late Dennis Hopper. How lucky I have been in fairly squalid circumstances to nevertheless find myself "one-on-one" w/ the books of Julio Cortazar. There used to be a bar in the BMT station, the Hollywood Bar & Grill, where I would linger before taking the subway back to the Lower East Side.

You're lucky. My most vivid recollection of Hopper is of him wheezing up nitrous oxide in 'Blue Velvet.' Seen him before & after that, but despite not seeing it since the 1st release, cannot seem to escape Blue Velvet...