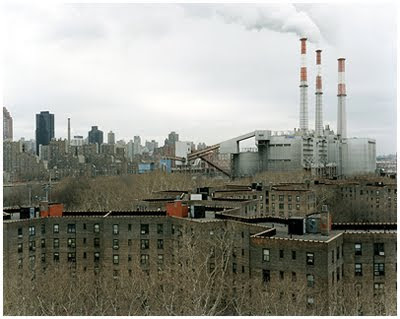 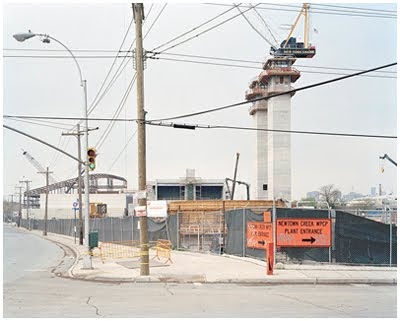 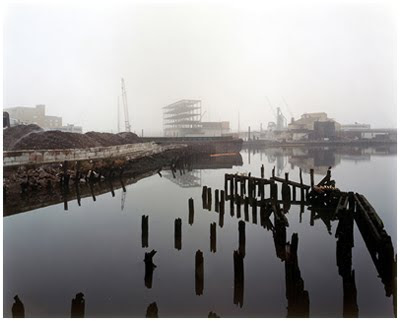 by Anthony Hamboussi is a journey around the perimeters of the Newtown Creek in New York City, an industrial canal which separates north Brooklyn from the western perimeters of Queens, flowing westward towards the East River. It is a self-propelled project, which began with Hamboussi's knowledge of the area, beginning in a childhood in nearby Maspeth, Queens. A seemingly casual project became an obsessive chronicle of several years. The images are presented chronologically which suits the essentially private nature of the enterprise, that of Hamboussi's journey into a polluted heart of darkness within New York City limits. Thoroughly researched & plotted, Hamboussi's itinerary also incorporated intuitive aspects, which can be seen in the fitful un-mappings of the area, giving it more the fitful mutability of dreams, in its starts & stops & divergences, while it inventories a large area of mixed industries.

I have been struck by how many New Yorkers do not know where the Newtown Creek is, although it is a ubiquity to those living in Greenpoint, Bushwick, Long Island City, Maspeth. The community with the most unlikely name in such a gray mess is Blissville, which straddles a cemetery & a Best Western Motel, on the Queens side. The creek stinks. It is poisonous. Its most notable landmark is the sewage treatment plant through which flows 3/4 of New York City's waste (& which now features a remarkably innovative park within its facilities). Good friend of mine once lived in Greenpoint, at the end of Manhattan Ave., on the other side of the Pulaski Bridge from the sewage treatment plant, which when the wind blew in a certain manner, mixing with the scents of a nearby scented candle factory, the area would be imbued with odors of intense sweetness & shit, even for those with a high gag threshold. There are now 2 centuries of industry layering its shores, & within it the boundaries have blurred between public & private, as streets mysteriously disappear into the gated confines of corporations, as maps mutate with no reason other than as the residue of decades of corporate aggression homesteading on these filthy borders. Seemingly deserted, it is actually active & dynamic as an economic nerve, sinking below the horizon of freeways, warehouses & factories.

Perhaps the most acute irony I could discover about the area is that in the 18th century, before its industrialization, the Newtown Creek gave its name to the first cultivated apple in the US: the Newtown Pippin. Grassy meadows sloping down to sweet waters, a peaceable kingdom of fish & fowl, a New World . . .

At this point we can only take someone's else's word on this. Hamboussi's photos show a diverse area of industry & infrastructure. While the frontage on the East River is now being developed as a corridor of high-rise apartments, the filthy core of the creek is still a crazy-quilt cross-section of industries & abject histories.

What will happen to the parking lot for the Fink Means Good Bread trucks? What pollutants were left behind by Phelps Dodge, before its site was taken over for the Fresh Direct warehouse? How can National Grid justify legally its prohibition of photography at its perimeter, outside its fenced borders?

Hamboussi looks at the Creek with the eyes of both an insider & an outsider. Given the lugubrious tally of industry & its aftermath at hand, Hamboussi's photography has a contrasting lightness of touch. While I know the work he has put into it, the images flow with their attention to detail, to the ability of Hamboussi to guide us through a landscape which would be so easy to ignore in its harshness, yet which reveals so much about the world we live in.
Posted by One Way Street at 12:27 PM