Michelangelo Pistoletto - No To The Increase of the Tram Fare, 1965 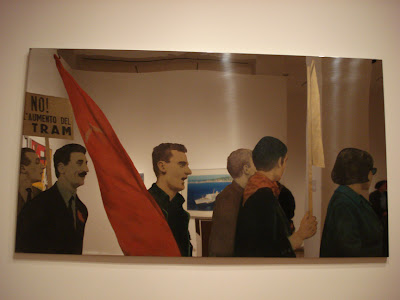 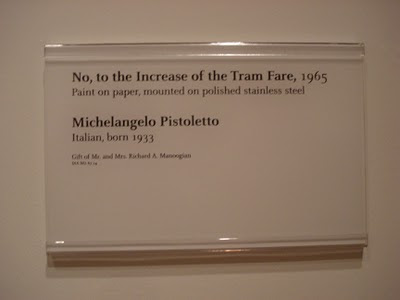 Michelangelo Pistoletto's mirror paintings, while not photography per se, engage the viewer with, for want of better terms, the conditions of photography. I find them meditative in regards to the act of looking in a technological, inexpressive manner, akin to either the snapshot or a news photo. They address the anonymity of photographic images, as a kind of mute recording, and the residue of looking at a photograph, unmoored as it is from its initial exposure, as a kind of after-taste. The mirror-polished steel of the surface, on which drawings from photographs are glued could be conceived as an echo of the daguerreotype, with its brilliant mirrored surface. However that seems much too historicist a reading: Instead what seems germane is the tension between a photograph as an art of both space & time, in which the recording of time is rendered as a 2-dimensional image, and the act of looking at a photograph, which is always a looking at whatever "time" is recorded as that time in the past tense, contrasted with the phenomenon of looking at that time in the here & now. The viewer is necessary to see the image & is complicit in its structure.

On a recent trip to the Detroit Institute of Arts I found a Pistoletto mirror-painting in the permanent collection of which I have no memory. The DIA is a museum I knew well in high school & college, but which I saw little of except in the past few years. The museum was renovated & expanded, re-opening in 2007 & I am just now seeing my way around its changes.

I found the Pistoletto very moving. I realize that Pistoletto's work isn't really suitable for an "emotional" reading per se. While like other examples of Arte Povera it involves a very direct experience in the here & now, it is also suffused w/ enough irony & distance to become a kind of alienated experience, it amplifies the lackings it invokes. Most often in the Pistoletto mirror-paintings it is images of others, but others barely seen, figures turning away, social scenes of no fixity, which put the viewer reflected in the scene into an oblique relation to the scene, never involved enough, not really there, but there. In this oeuvre of anonymity there are also several scenes of political activism, such as the scene in No To The Increase of the Tram Fare. The ambiguity of the relation to a political event, which can evoke both sympathy & distance, seems the ultimate subject. Other examples that come to mind are the woven global maps of Alghieri e Boetti in which the needlepoint contours of countries are filled w/ variations of their flags, or numerous paintings of Gerhard Richter, such as his portraits of leaders, or the suite of paintings of the Red Army Faction taken from news photographs - also w/ Richter, history is as common as the utter banality of the everyday, it is not "different" from more anonymous scenes. It's a kind of queasy relation to history, to politics, existing outside the boundaries of the frame of whatever - photo, weaving, painting.

The DIA has a remarkable mural sequence by Diego Rivera in the center of its original structure, made in 1933 of industry in Detroit which was paid for by Edsel Ford. The subject is primarily the manufacture of automobiles, but it also includes the pharmaceutical industry, shipping, aviation, agriculture. There was controversy about the murals in terms of Rivera being a sworn communist (although kicked out of the CP for his interactions w/ Leon Trotsky), also a communist being paid by an uber-capitalist such as Ford - I think also there was difficulty with the subject matter being a bit too close to home. The automotive money which built the DIA had fairly conservative tastes which was a happy occasion for the museum being able to acquire great Italian, Dutch & Flemish paintings, but not necessarily navigate the sedition of modern art. The Rivera murals are not biased with a specific political viewpoint, except out of sympathy with workers & the conditions of working & work as a fact of daily life. There is a cartoon-like parody of the bourgeoisie in the portrayal of factory visitors to the Rouge Plant, seen on a platform overlooking the assembly line (& looking almost like something from the Fleischer Studios) - then, as now, a feature of Ford. But otherwise any insidious propaganda is lacking, from what I can discern.

The direct engagement between Rivera & the factory is not there in the Pistoletto & his strikers, but I think the sympathy is still at least somewhat extant. But it has become a mediation of a mediation, hanging there mysteriously.
Posted by One Way Street at 3:09 PM