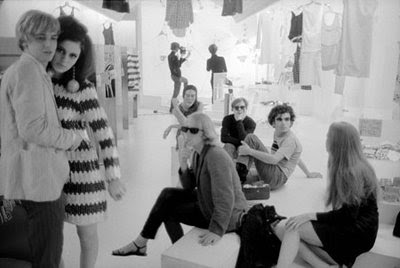 One of the treasures of my library is the 1968 Moderna Museet Warhol catalog. When I use the word "treasure" I am thinking of the pleasures the book has given me: now going through the books about photo books (Andrew Roth, Martin Parr/Gerry Badger)& the prices on bookfinder, I realize that was cast-off when I found it (circa 1990)is now itself a hot commodity on the market, at least hypothetically, in terms of current prices asked.

One of the curiosities of the catalog, besides the great 1960s Warhol work showcased, is that the last 1/3 of the book is 2 portfolios of photographs of Warhol & the various people around him, as assistants, friends, visitors, etc., mostly in Warhol's studio, "the Factory," by Billy Name & Stephen Shore. Shore's "career" at the Factory began when Shore was 17 - the work of a teenager w/ a 35mm camera, who found a subject of interest & stayed there: 35mm black-&-white snapshots, chaotic, social frames, which can seem extremely different from Shore's later work in color with a large-format camera. If one were to try to distinguish the salient qualities of Shore's color work, it would be in its hyperreal, mechanical ("objective") perspective, in which vision floats with a technological perfection outside any viewing body. I have heard Hilla Becher state that Shore's work was of great inspiration for her & Bernd Becher in articulating their own ideas of the uses of a camera. Still, if one considers Shore's retrospective projects, such as American Surfaces, which was done with a 35mm camera & includes more private snapshots, as well as his more recent Mac books, one can see a more eclectic range of work than the "signature style" of the Uncommon Places images.

The Stockholm catalog is printed on cheap acidic paper & the 2 portfolios of Shore & Billy Name are printed in an equally un-fine contrasty manner. Given the predominantly indoor, low artificial light shooting situations, there is an amplification of the decadent hybridization of private & public which distinguished the publicity around Warhol's Factory. The Factory, with an almost proscenium-like theatrical aspect, included myriad projects, assistants, visitors. In an immediate context this seemed an antipode to the solitary studios of the Abstract Expressionists, in which outside of the gestural aspect of painting (which can be seen in Hans Namuth's photographs of Jackson Pollock at work, for example), all other work is invisible, internal, in the heads of the mysterious artists, with utter seriousness. The Factory resembled more a classical atelier in which the artist acted as entrepreneur & brand, & the work would be executed by multiple hands.

The inclusion of the photographs in the museum catalog, of a social scene tangental to the artist's work, is a curious anti-formal excess. The images have no captions which exacerbates a sense of their exclusivity - one gets to see a party to which one was not invited. The art is a pre-text for the real goings-on behind the scenes, of which these are a tantalizing fragment.

I am struck by the purposefulness of the photographs in the catalog as support material. Years after the fact, both the Billy Name & Stephen Shore photos have been published independently of Warhol, as documents of these years, & they have also been used as illustrations in various books about Warhol. In the Stockholm catalog Warhol seems to be beating everyone to the punchline, as it were, & beginning his own visual history, in anticipation. The Shore images have been recently reprinted (in what appears to be digital prints) exhibition-size & sold by his gallery. I found the new prints lacking somewhat - black-&-white digital prints still seem to lack the depth of silver prints, unlike the color reprints of Shore's Uncommon Places and American Surfaces images which are luminous. Perhaps, too, taking the images out of the context of Warhol per se, whether a catalog, memoir or history, & presenting them independently, as art itself, does some disservice to the images, even though it is astonishing how well done the photographs are: "snapshots" - they are nevertheless informed, composed, witty. How precocious Shore must have been.

I think Warhol understood the privileges a photograph can give to daily life. What is recorded becomes the memory of what has been. The photograph acts as evidence of experience & also a kind of trophy, a prize. The inclusion of the Factory portfolios in the Stockholm catalog privilege a social scene which would have been invisible or unknown, mostly, otherwise. Warhol's later snapshots, taken by himself, explore this further: in which Warhol can "collect" the famous, the chic & the louche with his camera. The images from the 1960s are a bit more private & experimental, without the certified pedigrees shown.
Posted by One Way Street at 9:24 AM