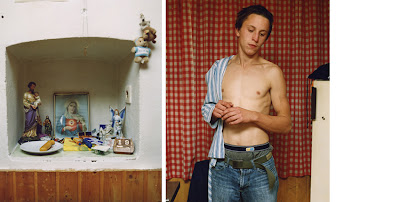 Tom by Paul Kranzler, Fotohof, 2006, documents a 20 year old boy Thomas, living in rural Austria with his family. Perhaps "documents" is too distinct a word, it has too much of a history and resultant expectations which defines the photographer's actions. In contradistinction to "classic" documentary which implies a non-intervention on the photographer's part,a witnessing but non-participatory presence, Kranzler makes the camera & picture-making a very conscious interactive process. Although there is no great physical resemblance, I am reminded of the posed portraits in Walker Evans' Let Us Now Praise Famous Men, & Evan's distinction of the term, "documentary style" as opposed to "documentary." The image is treated in an iconic manner to reveal indexical truths.

I had seen Kranzler's earlier book, Paul Kranzler: Land of Milk And Honey

, which details elderly neighbors of the the photographer's in Linz. Land of Milk and Honey bears more a resemblance to a book such as Richard Billingham's Ray's A Laugh, although Kranzler's tone is a bit more somber, although as earthy and open as Billingham. Land of Milk and Honey is mostly in black-&-white, with some color - as a formal issue, the use of black-&-white renders the scenes of the abjection of the elderly & poor in a less sensational manner than the immediate sordidness of color. Color, when it appears in the book, has the effect of a shock, a dread of the all-too real.

The images in the book Tom are in color & some have a magazine-like beauty to them - which references as well the cultural indeterminacy which is part of the book's agenda: Tom is part of a larger series entitled Country Youth (Land.Jugend) which examines the intersections of rural Alpine culture with a media-based globalism, which disseminates pop culture and consumerism everywhere. This is a fairly ineffable subject: how does it read visually, as opposed to say fragments of lyrics of songs half-remembered, or the fragments of stellar scandals & narrative threads that float in the ether? How do we see where the world intrudes on our lives, tucked away wherever we are?

I think this is a very tender book: it deals with the boredom & entropy of daily life. The youths look like saintly martyrs to the dullness of the world.

Kranzler's images are both graceful & matter-of-fact. They read as inventories of the boy Tom, his parents, his peers, & their immediate world. There is a simplicity in this which allows one to study the ordinary for clues to its prismatic nature.
Posted by One Way Street at 3:33 PM