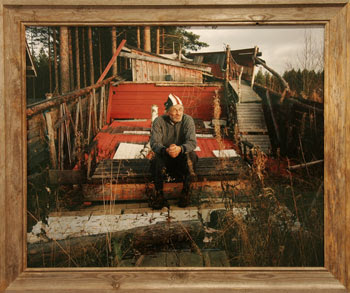 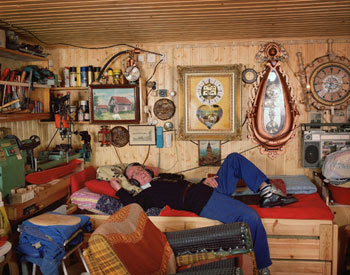 Now out of print and selling for high prices, Esko Mannikko's self-published book Naarashauki The Female Pike (2000) is high on my list of shoulda/woulda/coulda purchases I did not make.

I first saw prints by Mannikko through Jeffrey Peabody at Matthew Marks, when the images were being sold by Paul Morris. Jeffrey had purchased a few as well which I had also seen in his apartment. The specific project The Female Pike is color portraits of mostly middle-aged men living in the northern wilds of Finland, in relative solitude & one could guess "reduced" circumstances. By description the work may sound rather National Geographic or very basic photojournalism. Instead, the photos while detailed & informative as such, indicate a great sharing between photographer & subject(s). Unlike the more aggressive tactics of National Geographic, trading in the exoticism of the world, or professional photojournalism which is committed to defining reality as conflict & story, a packaged thing - instead in Mannikko's portraits there is more a curiosity, an exploration, & a remarkable lack of editorializing. One does not enter the false consciousness of photojournalism: knowing & feeling the subjects, by sight. Instead, the men, their homes, retain their cipher-like distance & simply float in the print as image, retaining their "difference" if that is looked for. The photographs are deceptively readable in that the lighting, the colors, the attention to details are all very highly defined. One can see so much. & yet a sense of reality, of the false totality which has been both a "promise" & a curse of photography - its relentless colonialization of the world - is absent in the work. There is a remarkable lack of psychology, or explanation: one is simply face to face with difference. This is not to say that there is no mood - these are extremely sensitive images, just circumspect in this sensitivity. Mannikko's photographs are slow history, the way historians such as Fernand Braudel or Alain Corbin would term it - dealing with the minutae of the everyday, as opposed to larger statements or narratives. I am also reminded of a comment made by the writer Manuel Puig who I heard speak at the 92nd Street Y. Puig stated, "I am interested in what people who have nothing to say, have to say." When Mannikko's photos are exhibited they are placed in old (not necessarily "antique" - too grandiose a term), relatively conventional frames. In the global art world this is an eccentricity, but it does place the images in a polemic which, by taste & utility, forgoes the international chic of the gallery world for a humbler household.

Currently represented by the Yancey Richardson Gallery, Mannikko has also exhibited & published work done in San Antonio, and a newer body of work of close ups of animals.
Posted by One Way Street at 10:11 AM