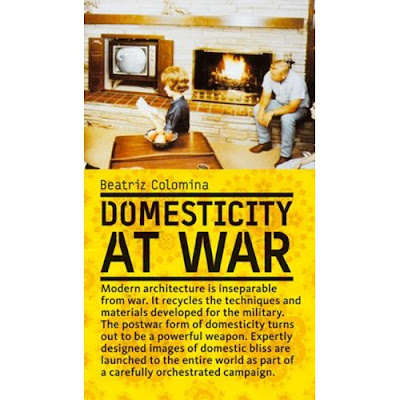 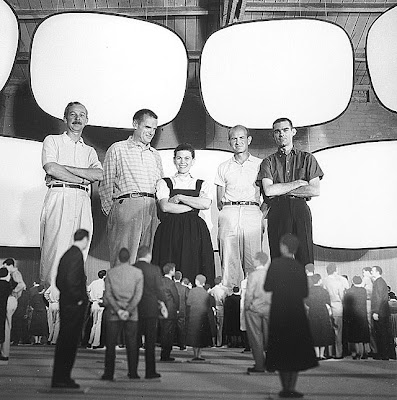 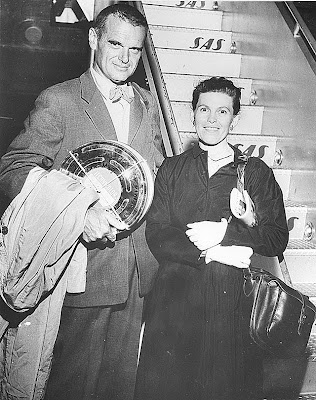 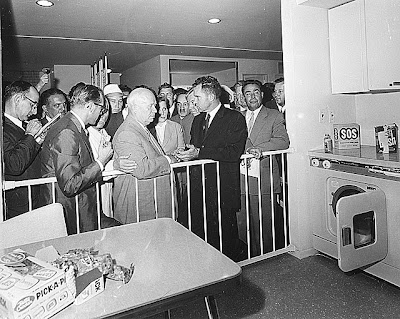 , MIT Press, 2007, is a study of the applications of military technologies in the post WWII domestic culture of the US.

In it Colomina writes about the participation of Charles & Ray Eames in the production of a 7-screen slide show, entitled Glimpses of America for the 1959 American National Exhibition in Moscow, which was the first cultural exchange between the US and the USSR since the Bolshevik Revolution. 2,200 images were projected on seven 20-by-30-foot screens, which were suspended from inside the roof of a geodesic dome designed by Buckminster Fuller. Given the conservatism of the Cold War, and the conservatism of the Eisenhower administration, it is a curious alliance of architects & thinkers with government, artists who would have been perceived as being much more progressive and modern, if not actually radical. But then US "modernity" became a selling point, if not of a national attributes, at least of a national sense of being "new" & dynamic & forward-thinking, in this period, after the quotidian deprivations of WWII. The screens were not strictly geometric: they had rounded edges, a "modernist" quasi-organic softness, resembling the shape of the then relatively new appliance, the television screen. The Eames, known as architects and designers, had also been involved in communications, as filmmakers, exhibition designers, and originators of multi-media presentations. Images used in the presentation were shot by Charles, his family, and associates across the country and culled from photo archives.

The Eames used imagery of daily rituals and entertainments, vernacular landscapes, and ordinary objects to promote popular culture as the currency of exchange between nations and people. The American National Exhibition was remarkable in that it's purpose in the Cold War between the US & the USSR, was to promote the splendid excess of domestic life in the US in opposition to the military build-up and Sputnik experiments in the USSR. This was a period in which the USSR was perceived as a serious military threat to the US. The famous "kitchen sink debate" between Richard Nixon and Nikita Khruschev, reported as as spontaneous outburst of opposing leaders, was actually a planned public staging, in a model kitchen, adjacent to the Glimpses of America. This is a curious use of the domestic attaining the status of symbol & myth as propaganda: a cornucopia of products in lieu of weapons. The excess of images, a generic display of potentially EVERYTHING as an attribute of the psychic good life of the US, in tandem with the newly scientific kitchen & bath, the post-war home-world, invokes a consumerist paradise, stoked with incessant dreams, dreams which also function as advertisements. Private Capital becomes synonymous with Government, which could be seen as a portent of the globalization we now experience in our social worlds. It is a curiously pragmatic method, a political seduction by new & improved creature comforts.

Although only one small part of the book, the reckoning of the Eames' use of photography, which in their highly developed sensibilities is an awareness of photography as mass communication, a potential for all, has much to say about the parallel world of images in our world, from LIFE Magazine, to the internet, in their ability to occupy consciousness in manners benign in their ubiquity, & dynamic as coercive tool.
Posted by One Way Street at 12:26 PM