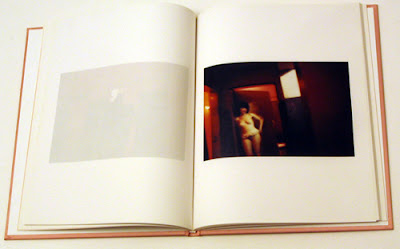 Madones Infertiles by Jean-Christian Bourcart, TDM Edition, 2002, is a small, lovely book of photographs taken surreptitiously by JC in the early 90s, in brothels in Germany. The camera was hidden; likewise in the circumstances, it was impossible to use the viewfinder. Such a process relies on chance and repetition, and also an acknowledgment of the unknown: what the camera records is unseen until later, when developed. JC put himself in situations wherein photography would not be allowed. Also he did not know what he would see. The hallways of brothels in this sense function as labyrinths, the exact passages never known. The images are in color & given the long exposure times there is a considerable amount of camera shake & blur. Given that this is a simple technical explanation, I would also point out that in his necessities - secrecy, long-exposures, JC has produced a series of images which read as dream-like & hallucinatory. If one were to consider the fantasies & desires that are brought to a setting such as a brothel, I cannot think of a better "documentary" of such a space. The tactility of the images, their lack of calculation, put one in the position of a voyeur. The "dirty old man" in raincoat is a stock comedy figure of foolishness & perversity: it is to JC's credit that he can basically assume such a role, that he understands that that is perhaps one of the great roles of photography in our culture, & that the obscene is ultimately very close to the sacred in its elucidation of desire: both are outside the self & are marked by perpetual yearning.

There are other strategies of photographing such a site: the portraits of prostitutes in early 20th century New Orleans by E.J. Bellocq, which may have been done as advertising for the houses, are, or were, crystal-clear & sharp, although now what we see is are fragments, the names & places lost. Lost, forgotten, until found by Lee Friedlander in the 1960s, exhibited & published by the Museum of Modern Art, these photographs violate their own conventionality with the ghostliness we now in our modern world are forced to confront in viewing their obliquity. Or a few years ago I saw a project by Paul Graham, of graffiti on bathroom walls, much of which is of a licentious nature, done with what looks like a large-format camera. In this the details, the colors, the readability of the graffiti are foregrounded. I bring up the Graham work which while not of brothels, such as the work by JC or Bellocq, the bathroom walls, public, indicate that if they are not directly the setting of illicit sexual encounters, such encounters are hypothesized in these anonymous confines, they are still a site of fantasy and bodily functions. The show had a rather snide title, Paintings, as the images were printed huge & resembled abstract-expressionist or color field paintings, but are otherwise of forlorn, abject spaces. I think this refers, sardonically, as well to the art-commodity status photography has gained in the art world since the mid 1980s. Paul Graham is among a group of documentarians whose work circulates now as fine art exhibitions, fine art prints, and books, rather than in the mass media - circumstances similar to someone like Luc Delahaye. A small catalogue was published by Greenberg Van Doren, or whatever it was called when the show was up, however it does not allow one to read the graffiti, which is really what the prints are about.

In the early & mid 1990s I used Brian Weil's darkroom & studio on Franklin St, off of Hudson. In the enlarging room a postcard of one of the images of what was to become Madones Infertiles was on the wall: not knowing the photographer it was simply a visual talisman for me. The work resembles as well some of the early work by Brian, which included a staging of sexual fetishes, which he photographed, then re-photographed, in what was a distinct style for his work, of extreme grain & contrast, next to no detail. I have mentioned this to JC which he insists is impossible, however both JC & Brian showed in the early 90s at Gilles Dusein's gallery in Paris, Urbis et Orbi, which is where the postcard was from. Along with my admiration of JC's work, his project reminds me as well of my love for Brian, and for so much of what now seems in retrospect the best part of my life in that period.
Posted by One Way Street at 8:14 AM

Wow, what an evocative and elegant review.

It parallels the Lincoln Kirstein bio I am reading, in a sense, which breezes over the details of his youthful "hook-ups" in a way I find both careless and frustrating. It leaves me hopelessly trying to fill in the blanks.

My favorite detail was that Widener Library was a popular haunt of men seeking men. I want to see the hidden photos of the stacks there and all of the lads of those days lurking with intent!