Andy Warhol - A Boy For Meg 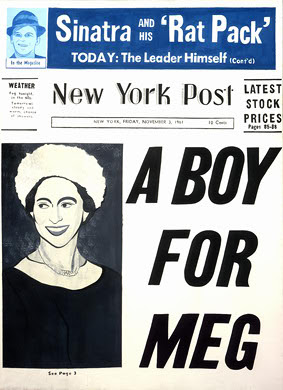 Now in the collection of the National Gallery in Washington, "A Boy for Meg" was on long-term loan to the Detroit Institute of Arts, where I saw it on numerous occasions as a child. It is one of the first paintings I can recall, distinctly, & as such represents a kind of primal memory (as it were) of aesthetic experience in my childhood. I was not directly aware of tabloid newspapers such as the NY Post, which was the template for the painting, I could recall tabloid "style" - my education was primarily cartoons (Bugs Bunny, Tom & Jerry, Rocky & Bullwinkle) & the Warhol in its own way followed such a suit. Easy to recognize, it seems.

My mother read movie star magazines rather obsessively in these days - Photoplay, etc. which she would hide, like pornography, & I as an inquisitive child, found them & read them cover to cover, before returning them to their hiding-place. Ethel Kennedy's affair with Andy Williams (my mother & I would watch his TV Christmas special together every year), Jackie K becoming Jackie O & as such transforming from Great Widow to Great Whore in the scheme of things, Ted Kennedy's "incident" at Chappaquadick (I think we paid attention to the Kennedys because they were Catholic - I went to a Catholic grade school at one point & my 3rd grade teacher told us all that if a Kennedy was elected, this was before the death of RFK, then God would be in the White House, helping out). for example.

Along with Photoplay, etc. my favorite book at that time was Edith Hamilton's Mythology - Timeless Tales of Gods & Heros. Itself a compendium of (truly) immortal gossip. I would attribute any ability on my part to recall intricacies of connections to these 2 random aspects of my childhood culture. Seeing Renaissance & Baroque tapestries for example I could recognize attributes of Gods unseen to my family: Mercury, Apollo, Aphrodite, etc.

The Warhol somehow fit into the pop mass cultural world around me & also remove itself from the "shelf" as it were - I could recognize the same Campbell soup cans, the Brillo boxes, the ads in the back of comic books, etc. to be found in any supermarket. My aunt Lucille, a secretary at GM Overseas, had taken me to the DIA for an exposure to culture, something neither of my parents would have ever attempted - it meant an exposure to that great entity, "the finer things in life" which from her petit bourgeois world meant also that they were the stuff of museums, others, "not for us." This was not dissimilar from the car rides we did on Lakeshore Drive in the Grosse Pointes to look at the mansions of the Fords, etc. Look but don't touch. But like the illicit photos of Jackie O being stalked, the weirdness & splendor of an art museum was another form of forbidden fruit. & although making no claim at all for any deep illuminations in all this media hubbub, I think I did discover & discovering knowingly, looking at the Warhol, a way to mediate the mediation all around us. & it had humor & spirit - a child could understand its mockery, it camp, & its independence.
Posted by One Way Street at 11:48 AM