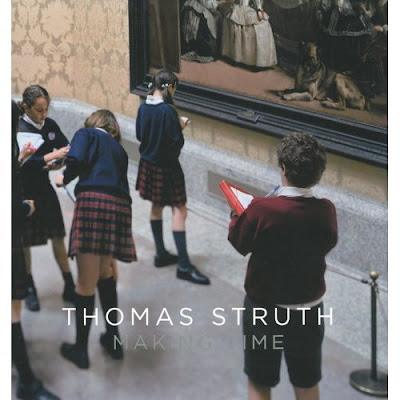 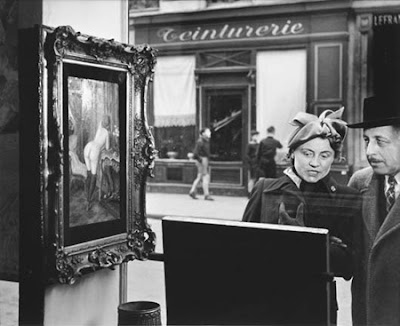 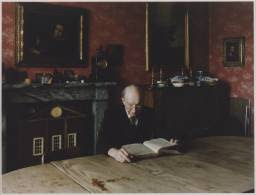 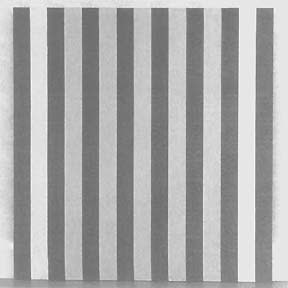 is a catalog for a show by Struth at the Prado, as well, with a bit of perversity, a documentation of Struth's show at the Prado. There is some wit in this: the catalog, rather than representing a simultaneity between show & catalog, depicts it in the past tense. The show had to be up, & photographed, for the book to be made. Photographs of the installations become "Struth photographs" along with the existing Struth photographs placed throughout the museum.

When I first saw Struth's museum photographs I found them striking - perhaps mainly because of formal aspects such as color & the luminosity of the printing, which is sober but rich. & also my voyeuristic interest in seeing old master paintings was satisfied. I don't know if my satifactions have been sustained by the work, however.

The work in the Prado, like the Pergamon Museum, the Art Institute of Chicago, wherever, has its greatness, its indisputable status as classic. That's not quite the subject of the photos - the photos detail the morgue-like setting of the museums as a site of spectatorship & also a kind of aesthetic enthrallment. I'd say at this point I find myself withdrawing from the work as I can't abide what seems a near single-minded focus of the museum-goers on the art, in a timeless state of contemplation, as a common scenario. The temporal spectator face-to-face with the eternal masterpiece: Vita brevis, longa ars. This seems an idealized, unrealistic assessment of a contemporary museum experience. Even in the thick crowds depicted, which in "reality" would be loud with noise & distraction. Struth's cool, sober formalism shuts out any sociology of a museum experience. I can't help but think that a more satirical & social photographer such as Martin Parr might be an interesting counterpoint in such a situation.

There have been rather silly images of "art-viewing" in the history of photography. The most reproduced one I can think of is the Robert Doisneau image of an older couple looking in the window of a gallery, on the wall there is a painting of a naked lady - the viewer recognizes that the "nude" is really "naked" & there for a prurient gaze from the man. This is a kind of visual joke that was more popular in the world of picture magazines, w/ images by Doisneau, or Elliott Erwitt. Well - maybe the sociology I miss in Struth is actually rather stupid & magazine-like, after all.

Am I positing 2 extremes merely for effect? The mocking vulgarity of the mass culture magazine, in which high culture is meant to be "brought down" a notch or so, as not being quite what it purports to be. Versus the humorless, solemn & all too beautifully pensive images of Struth, wherein the art experience still has an aura of "elevation." Perhaps.

Still, I find myself bristling a bit w/ the Struth museum images in that they hold back any meaning in an opaque formal way. Orson Welles said that one could never believe a (filmed) image of someone praying; likewise I doubt any image of an elevating visual experience. Even if in theory it is a reflective state I seek rather often (I doubt it would look like anything however).

This may be an overstatement. It is intriguing that the Prado, or any museum, would exhibit photographs of its galleries in its galleries. Such "self"-reflexivity (the institution as a kind of self - a little too museum for my comfort) is a kind of reactionary version of something like Daniel Buren's installations in galleries in the 1970s, which baffled the ideologies of galleries by drawing attention to them, and reducing them to generic geometric flows. In the Struth museum images, which can seem a bit marvelous, and offer a lot of seductive visuality, one is unable to understand much beyond just that. While the lack of anecdote or narrative, & the resolute formalism of the images is of interest, and easy to "enter", again my mind wanders to work which is not quite so visually pleasing but of much more interest in looking at art: from the installations of stripes by Buren, to the photographs of art in its settings by Louise Lawler, in which art is a status symbol, a possession, a decoration, an example of taste - in which there is a negation of any metaphysics or inner-experience.

I try to remember first seeing Struth's work in galleries, in the 1980s. It was a different experience than now & I do not believe that is just an example of my own aging. When first seen in NY, for instance, Struth, along w/ Andreas Gursky & other students of Bernd & Hilla Becher, utilized a technological objectivity which initially dated from experimental photography in the 1920s, & which had been reinvigorated by the Bechers, given a conceptual rigor lacking in magazine or artistic photography of the past decades. Still, it is almost shocking how someone like Struth can "cross the street" so effortlessly & go from the avant-garde to the academy, & look quite the same, doing so.

At the risk of sounding too harsh re Struth, I can also state that in the glorious galleries of the Prado, w/ Las Meninas & The Spinners, along w/ other Struth photographs "intervening" among the old masters, there was also one of my very favorite portraits by Struth, of the art historian Giles Robertson (there is also a very great double portrait of Robertson w/ his wife). & that meant something to me somehow - a photo in a photo in a book of a show - these curious mediations we take to see ourselves & our worlds.
Posted by One Way Street at 11:15 AM