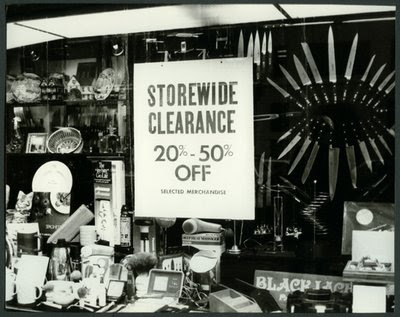 There is a Sufi story about a group of blind men feeling an elephant, each at a different part of its body, each trying to describe the totality if the animal, from the point at which they touch it. The story being that none fully describe it. Andy Warhol as an artist seems as perplexing as this hypothetical elephant. What did he do? What did he mean? I can think of few artists who can embody so many contradictory practices and tastes - someone held in esteem both by the editorial board of October, & family members of the deposed Shah of Iran.

Depending on what work is seen, a different Warhol appears. If I were to have seen only the installation at the DIA Foundation in Beacon, for example, with its enormous gallery of abstract shadow paintings (which I found rather uninteresting except in the excesses of the installation), it would be different from the more spectacular gallery in the Hamburger Banhof in Berlin, with its enormous Mao, its even larger camouflage painting, & some of the Disaster silkscreens.

Or I think of one of the first paintings I can recall clearly from my childhood, a painting entitled "A Boy For Meg" - a painting of a NY Post headline about Princess Margaret. It is now in the National Gallery in Washington, but was on display at the Detroit Institute of Arts, when I saw it. An early lesson in camp for me.

Or the films, which are wonderfully terrible as drama (Vinyl, Poor Little Rich Girl), & mesmerizing about the "film" experience.

Or the very ambiguous celebrity portraits. Was Warhol a court portraitist to a global power-elite?

To add to the bewilderingly prismatic Warhol bodies of work is a great catalog of a show at the Timothy Taylor Gallery in London of black-&-white photographs which was curated by Steven Bluttal.

"Portraits & Landscapes" is a collection of black-&-white photographs done over an extended period. The title refers to the layout of the images - portrait is vertical, landscape is horizontal. Unlike previous collections of Warhol's photographs which relate to work such as the silkscreens, or were exhibited independently, such as the stitched photographs, the images in the show do not represent any any specific artistic project per se. These are random photographs. The Warhol we see in this is near anonymous - this is the work of an active snapshooter. We look at them because Warhol's name is attached to them. The Warhol we see can baffle us further: a photographer accumulating images, shooting constantly. This is about bulk, much more than a studied delectation. The camera becomes a tool of acquisition.

The design of the book is based on the Ed Ruscha book Every Building on the Sunset Strip. Like the Ruscha it is an accordion book, in a foil-covered slip case. The images are reproduced at the top & bottom of the pages, counting to over 200. It's a genuinely lovely book, well-done. There are other books which parody or emulate Ruscha's self-published books, such as Louisa Van Leer's Fifteen Pornography Companies, which wear a little thin in such recognition. The catalog from Timothy Taylor is both similar & different enough to exist independently as a book, even in the long tall shadow of Ruscha.

Steven Bluttal is also the editor of a book of images of the designer Halston - it is a thick brick of a book of ads, editorial images, & other visual ephemera. Bluttal is bright & sensitive to the fascination of materials which could very easily be overlooked. Given the excesses of what is coming out of the Warhol Museum, one can only hope for more & different work to emerge.
Posted by One Way Street at 3:20 PM

Bernie! I find the shadow painting room at DIA Beacon a stunning work of art. Keep it in your mind and it grows.