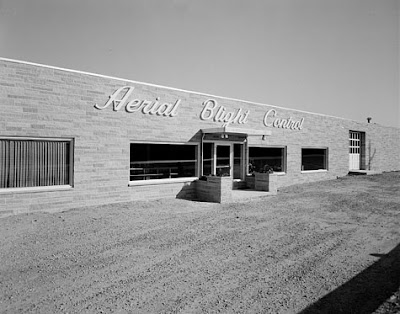 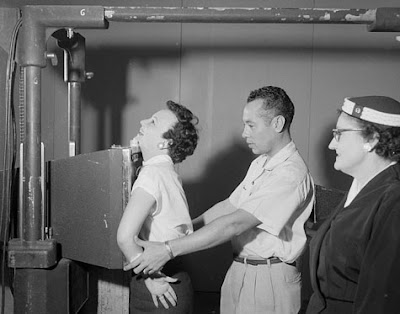 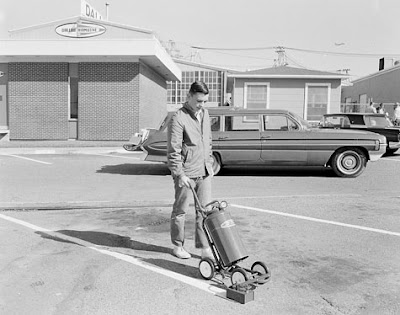 by Marvin Heiferman & Diane Keaton is culled from an archive of 4x5 black-&-white negatves of commercial work done by Bill Wood, a photographer & camera store owner in downtown Dallas, working from 1937-1973. There are a total of 20,000 negatives in the archive which was originally saved by the archivist Rick Prelinger, which was later owned by Diane Keaton, & is now a gift to the International Center of Photography. Heiferman & Keaton have collaborated on books of industrial images in the past such as Mr. Salesman; & Keaton is also a photographer. Her book, Reservations, is one of my treasured possessions - & when I go to Miami Beach I look in vain for what is now a lost world of Morris Lapidus & such designs, such as those seen in her images.

Bill Wood's photographs, all done commercially, are a fascinating insight into the social fabric of post WWII USA. An entrepreneur, a public figure, Bill Wood himself emerges as a resolutely cheerful, social figure - a Mason, a lodge member, his name emblazoned on his car & in neon over his store. If anything this shows us an aspect of photography as a kind of thread to the social fabric - from showroom displays to prizewinners to re-enactments of accidents to new buildings & streets - the photograph as a kind of proof & reinforcement of social values emerges, even when we can no longer identify directly what the uses of the images. Both familiar & strange, there is some uncanniness to the images, which are nevertheless deliriously cheerful & matter-of-fact. Lists of the subjects do not do the images justice. I am struck by their constant "can-do" spirit, their euphoric faith in the "new" world of the modern city & suburb, product & display.

As a collection, the book reminds me of Evidence

, the book by Mike Mandel & Larry Sultan. Evidence utilizes the obsolescence of the images - that they have lost function & sense - to create a new narrative of images which become enigmatic in their lack of context, again utilizing their familiarity to lead us to a state of un-knowing. The Bill Wood photos do this with their eclectic subject matter(s), rendered as if all of one piece with the uniform clarity of film & flash, yet never revealing their "secret," if there actually is one. I am reminded of the worlds of my parents & their peers, their "new" world of subdivisions & products, from ready-to-wear clothes to frozen vegetables. Perhaps I am romanticizing this epoch, but I do believe they believed they had inherited a new world which was bountiful & extraordinary in the everyday - optimistic values not so apparent in our current world. If there is a "zeitgeist" to the ordinary, I believe it can be seen in this amazing archive of our once brave new world - we see what we have lost, or what is no longer available to us.
Posted by One Way Street at 7:08 AM

There was a pretty good interview with Keaton and Heiferman on the radio show Studio 360, and, while radio may not seem like the best medium to address photography exhibitions, it is worth checking out.