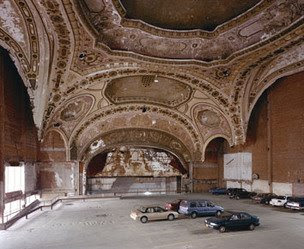 What an interesting group of images to contemplate. Both T. & I were most enthusiastic about an early (1969) 8-piece grid of a single building, by the Bechers - seen methodically from 8 no doubt equidistant vantage points, encircling it. There were also early works by Struth (including the photo of the intersection of Crosby/Spring in lower Manhattan, which I often show students, pointing out the future locations of Balthasar & Starbucks), Ruff (interiors in an apartment building - each image identified by its room number - I wondered if this was student work, it seemed slightly more photographic than I would associate w/ him). & a series of vague, un-fixed images of Turkey by Polke. Overall a stunning show.

T. had recommended I look at the Stan Douglas Detroit pictures. I had seen them briefly in 1998 at David Zwirner & had a somewhat different memory. The images date from 1997-1998. Both T. & I remembered most distinctly the image at the top of the parking structure in the former Michigan Theater (also used in the film 8 Mile). When I saw the image initially it was a period when I had not been in Detroit for a few years & was out of touch as to the then current topography. The Douglas pictures were taken at the onset of construction of Ford Field & Comerica Park, which displaced a large area of downtown. 2 distinctive structures, the Gem Theater & the Elwood Diner were moved, for preservation purposed, & can be seen in transit. The scenes in the photos are both well-known places or buildings, mixed in with some much more anonymous sites. My sense is that a fair amount of research went into the choices, measured with enough freedom from a didactic agenda. If anything the Detroit photos remind us that without a specific context, photographs float in a kind of suspended animation, absent from specific meaning. One can see that the attention is mostly to the entropic decay of the city (perhaps more glamorous to outsiders than residents), however, there is none of the didactic recordings of a sociologist such as Camilo Jose Vergara. Is Stan Douglas being an aesthete of urban decay? There is that possibility; however it is a relief as well to not have explanations, statistics, facts, purposes - it becomes a bit formal perhaps, dealing with the phenomenology of technological images - which may or may not seem deceptively simple. The images are all color, varying in sizes & shapes. One can see the great icons of urban abandonment in downtown Detroit, the empty Michigan Central Depot (also seen in the film True Romance) & the until recently ruinous Book Cadillac Hotel (I have photos from the same intersection at Michigan Ave & Shelby). & there are some not so well known locales such as the perfectly monotonous, gray, abandoned Idlewild Motel (a great example of roadside readymade), & one perverse excursion into wealthy suburbia - a perfect green lawn in Grosse Pointe Farms, at the shore of beautiful Lake St. Clair, with a hanging loveseat facing out towards the placid water. An image of suburban private back yard splendor.

There is also an anomalous image of the Mies Van Der Rohe development, Lafayette Park, which is not in decrepitude, unlike what seems most of the city. Or at least this is anomalous in the structure of a journalistic essay, which the photos are NOT. This is an illuminating example of the different structures & necessities of journalism and art. Also curious to a former Detroiter adrift in Berlin, the signage for the Mies development & one of the Idlewild images were switched. A meaningless mistake, but of note to a former local such as myself & sweetly bizarre (one a cracker shack, the other a modernist epiphany). Also an image of a gas station is labelled "Paradise Valley" which officially no longer exists - it was torn down for a freeway long long ago.

To a Detroiter this portfolio may seem incomplete - but what could really be complete with such a project? There's a certain amount of beauty in these images which seems important too - a kind of golden twilight light. They are quite silent, still, contemplative. They seem of similar cast to the videos of sawmills by Douglas, as well - the contemplation of industry & its residue.
Posted by One Way Street at 11:59 AM