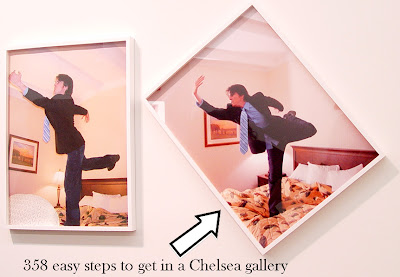 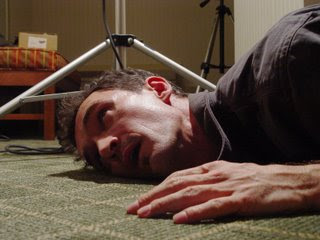 Last Sunday I attended the opening at the Aldrich Museum in Ridgefield, CT, of "50,000 Beds" a project by Chris Doyle, of videos produced in hotel rooms in Connecticut, with exhibition venues at the Aldrich, Artspace in New Haven, and Real Art Ways in Hartford. The shows are comprised of videos made specifically for the project, all of which involve use of a hotel room somewhere in Connecticut. Curiously, the catalogue for the show includes a listing of participating hotels with contact information, which indicates a kind of touristic agenda, although the videos could hardly be seen as infomercials for scenic CT. Or one could consider them the kinds of infomercials one could at least hope for.

Oliver Herring's video "Nathan" is of "Nathan" dancing in a strenuous balletic manner in a tiny crowded & otherwise undistinguished hotel room. Nathan is tall & in a suit. The suit has an artificial aspect: it does not seem to fit the boy. Or it does not fit his movements which are extremely athletic & both graceful & rough. Tumbles accompany leaps & pirouettes. Stretches collide with the furniture. & one can hear huffing, puffing & the thuds of Nathan's body hitting walls & floor. As I understand it, the video was done with a certain amount of spontaneity, without a defined choreography, the exertions of the eponymous Nathan and chance forming the perimeters of the medium. Oliver Herring's camera work is hand-held & as improvised as the movements of the boy Nathan. The video reminded me of silent film comedy & also the "New American Cinema" of downtown NYC in the 1960s. Quizzed about his working methods, the filmmaker Ron Rice once answered, "Turn the camera on." Oliver Herring's video reminds me of the intense beauty that can be found in everyday delirium - incantatory, full of longing, parodic, witty. It is just fun to watch. What is truly distinctive about the work is an exultation of energy, which I would attribute to both the hard-working model & the very alert videographer.
Posted by One Way Street at 8:40 AM