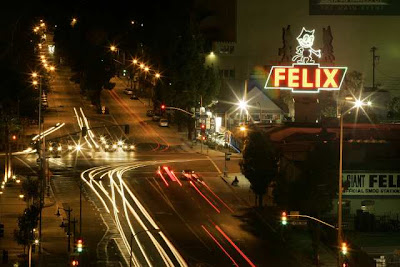 The three-sided "Felix" automobile dealership sign near downtown that has survived earthquakes, fires, riots and recession escaped another close call Thursday as the city's Cultural Heritage Commission voted to declare it a historic-cultural monument.

Commissioners rejected recommendations by Mayor Antonio Villaraigosa and downtown-area City Councilwoman Jan Perry, who favor redevelopment of the South Figueroa Street corner where the cartoon cat figure has loomed large for half a century.

"It is literally a modern totem pole," said sign preservation advocate Jim Childs. "It really explains the evolution of the automobile and Los Angeles."

The Felix character was borrowed from the popular 1920s cartoon "Felix the Cat" by pioneering L.A. automobile dealer Winslow Felix, who opened Felix Chevrolet in 1922 at 12th Street and Grand Avenue. Felix was a friend of filmmaker Pat Sullivan, whose animation studio created the mischievous feline character.

The large neon sign depicting a Chevrolet logo crowned by the grinning cat was erected at Figueroa and Jefferson Boulevard when new dealership owner Nick Shammas relocated the Chevrolet franchise there in 1958.

These days the dealership sells Cadillacs as well as Chevrolets, although the glowing Felix Chevrolet sign commands the view of motorists on the nearby Harbor Freeway.

The surrounding Figueroa corridor, meanwhile, is undergoing a transformation as new loft and condo developments go up between USC and the Staples Center area.

Villaraigosa and Perry have supported Figueroa's upgrading and both urged Cultural Heritage commissioners to reject monument status for the sign and the showroom beneath it.

"This site offers a tremendous opportunity for the growth of the Figueroa corridor," mayoral aide Krista Williams-Phipps told panel members. She said dealership operator Darryl Holter has offered to donate the Felix sign to a museum.

Greg Fischer, a deputy to Perry, said the councilwoman feared that the landmark designation would stymie Holter if GM requires him to remodel the showroom and "possibly inhibit the further development of auto row" in the corridor.

Holter, son-in-law of Shammas, who died in 2003, said that there are no plans to demolish the showroom, which was built in 1920 and has been remodeled numerous times over the years. But he stressed that the dealership may face changes when Shammas' elderly widow dies.

"GM can force dealers to build a new building when the old owner dies," he explained. "They tell you what paint to use and where to buy it. You have to follow what they say to keep the franchise."

Felix's fans urged that the sign and showroom be left intact. They noted that landmark status does not permanently block removal of a historic structure but does force property owners, developers and city officials to carefully study the effects of demolition.

"Felix Chevrolet is a landmark in every sense of the word," said Mitzi March Mogul, a historic preservation consultant.

L.A. Conservancy representative Jay Platt told commissioners he is among millions "who loved the Felix the Cat sign as a kid."

Laura Meyers, a member of the North University Park Community Assn., suggested that a preserved Felix showroom could eventually be converted into something else, even "a retail store carrying cat things," if cars are no longer sold there.

"We're looking at an icon in California history, a true definition of L.A.'s love affair with the automobile," added Charles Fisher, who teamed up with Childs to nominate the sign and showroom as a landmark. Both are members of the Adams Dockweiler Heritage Organizing Committee.

Commissioners voted 4 to 1 in favor of the landmark designation.

"That sign has to be kept in its context. It's synonymous with that corner," said commission President Mary Klaus-Martin.

"It's an icon of L.A. It's value is there, not in a museum on Wilshire Boulevard," agreed panel member Glen Dake.

So in a town that cherishes commercial characters such as Bob's Big Boy, the Western Exterminator man and Chicken Boy, Felix the Cat continues to live up to his name — which is Latin for "lucky."
Posted by One Way Street at 11:27 AM