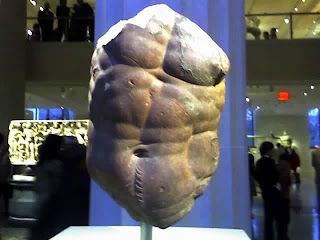 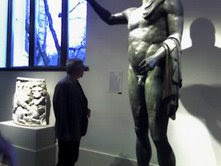 The reinstallation indicates the perimeters of some of the renovations of the pieces, with diagrams. Also in the reinstallations of the rooms, gaps between the fragments of wall decorations are painted in, to effect a more seamless, whole sense of the complete entity of the spaces. This provoked a discussion between us about the museological ethics (is that too strong a word?) of presenting fragments in an illusory sense of being more finished than their actual state. Some of the work has restorations from previous times (17th - 18th century) noted: in which case the restorations themselves become historical. Such methods, whether discrete or obvious, are still,perhaps, the closest approximations of our attempts to see or understand the work of the past, despite any instincts that this is a kind of Disney-vision of antiquity. In this sense it seems like a bit of an abyss: museums are strange.
Posted by One Way Street at 10:20 AM