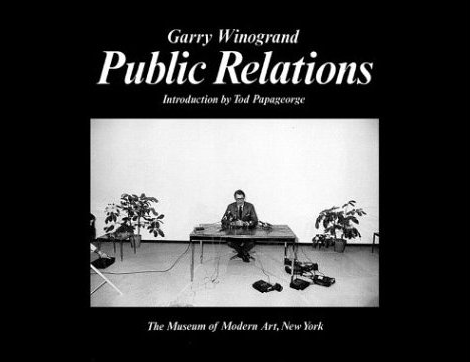 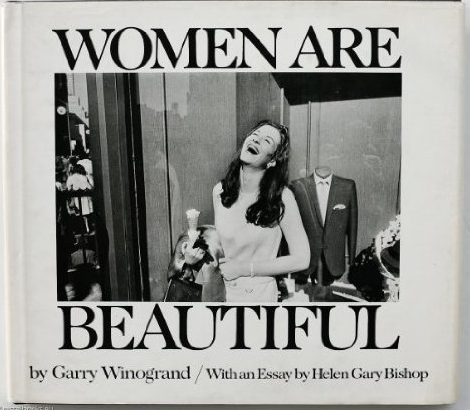 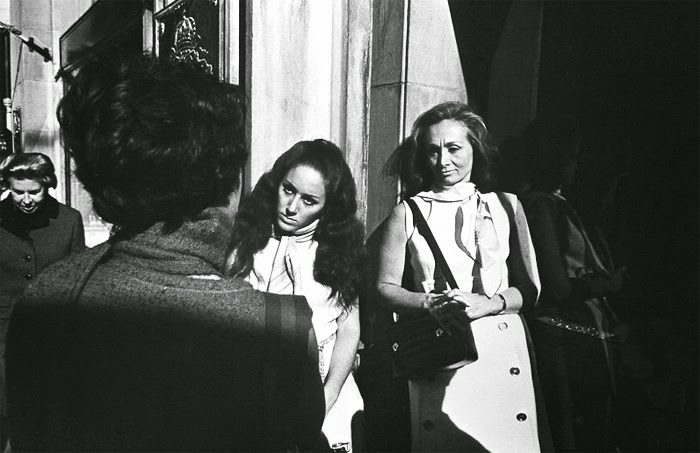 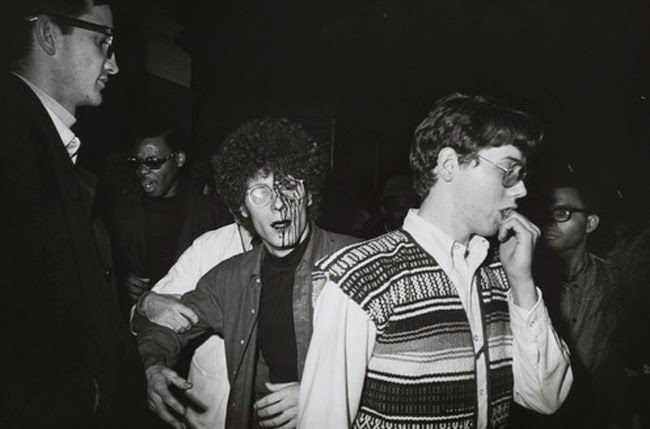 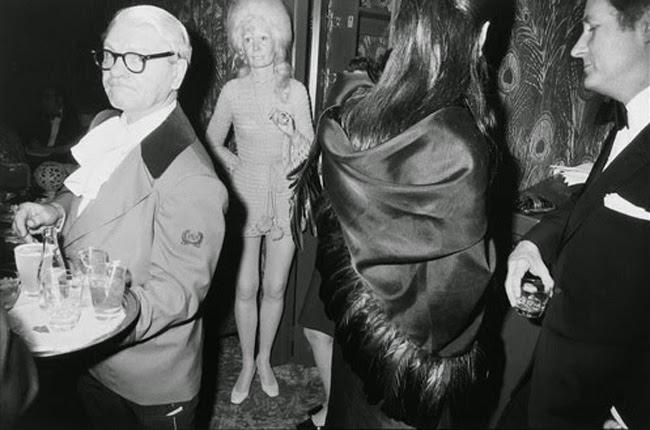 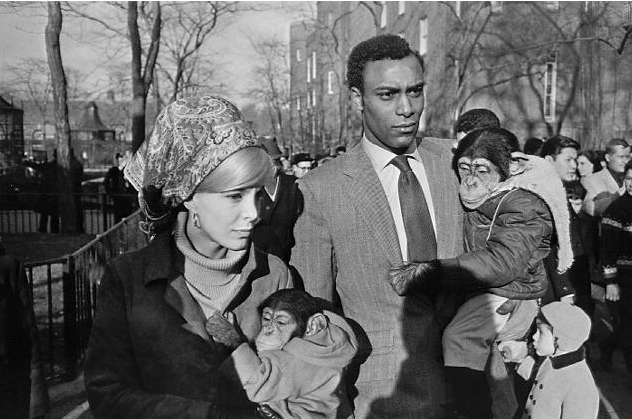 The recent exhibition of photographs by Garry Winogrand at the Metropolitan Museum was a pleasant, fairly dense show, arranged chronologically from Winogrand's early forays in magazine and commercial work, through his later projects which were done as books and exhibitions, along with archival ephemera. Winogrand, along with Diane Arbus and Lee Friedlander, was part of the Museum of Modern Art 1967 exhibition New Documents put together by John Szarkowski. Szarkowski worked with Winogrand through Winogrand's lifetime, to the extent that Szarkowski edited Winogrand's hitherto unprocessed rolls of film and created a posthumous exhibition with them after Winogrand's death in 1984.

John Szarkowski's presence in the reception of all three photographers is still strong, but as Szarkowski's directorial command recedes into the past, unmoored from his long ago curatorial dominance, looking at this work is akin to unpacking a box that has been in storage for so long that it looks different to see again.

For Szarkowski, the artistic modernism of photography was removed from its social practices, even as the work referenced what was then the strong twentieth century culture of picture magazines, which by the late 1960s were waning as influential visual information, eclipsed by television.

In the introduction to New Documents, Szarkowski writes:

"In the past decade this new generation of photographers has redirected the techniques and aesthetic of documentary photography to more personal ends.  .  . Their aim has not been to reform life but to know it, not to persuade but to understand. The world, in spite of its terrors, is approached as the ultimate source of wonder and fascination, no less precious for being irrational and incoherent . . ."

Szarkowski distinguishes the work of Winogrand, Arbus, and Friedlander from one another with the qualifier:

"What is held in common is the belief that the world is worth looking at, and the courage to look at it without theorizing. . ."

What is the photography Szarkowski promotes? For anyone who has been in an art school critique, the use of the word "personal" is recognizable as a defense mechanism: who can argue with it? It means to stop with any further interrogation. It's akin to the language of Human Resources: you begin your complaint with the phrase "I feel . . ." as a feeling cannot be disputed. "Personal" is now the lame, general rebuttal to the routine bureaucracy of our lives, a little rock to hide under.

Likewise all political awareness is rendered moot: it is smothered by the vague notion of trying "to understand." The photograph floats in its own formal photographic-ness even when it entails "that the world is worth looking at" without any "theorizing."

Szarkowski's platitudes are so frustratingly vague. Anything outside of "photography" is a kind of pollution, an interference. Szarkowski insists on the retinal aspects of photography to carry meaning, rather than any social, conceptual or linguistic settings which would be part of the image. We are left with the model of the photographer as the mute visionary, which in its time was a radical and sophisticated position in relation to the low esteem that photography was held in relation to the Fine Arts, but now it is creaky and antiquated.

This isn't meant to dismiss Szarkowski, but to ask that discussions continue beyond the white box of his writing, publishing and exhibitions, and to keep that museum-comfort in mind. The new exhibition reminds us that any story out there for Winogrand, Arbus, whomever is not finished.
.
The formalism of Winogrand's books Public Relations and Women Are Beautiful, partially shield the images from their social aspects by drawing attention to the process of photographing, as an illustration of the myth generated by bald statements by Winogrand such as "I photograph to find out what something will look like photographed."

While Winogrand's turf is the social world, and his alienated relationship to it, any agency (critical, political, emotional) is flattened in the clinical, macho, photography-for-photography's sake policies at work in its presentation. Winogrand is like some manic medium, channeling a torrent of images of a post-WWII America of highways, strips, banal prosperity and expansion, all of it as a downer rather than a protest.

There is a junk food level consumption of film and exposure in Winogrand's practice that now looks nostalgic in our even more hyper electronic world of social media. What seemed manic for Winogrand looks slow in contrast to the average Instagram user.

Seeing marathon runners carrying sticks with cameras at the end, to record their feats, brings Winogrand to mind, to the weird capitulation to camera technology as a timepiece in one's life. In our latter days of "selfies" and social media which ostensibly put the "we of me" out there for the world to see  - perhaps in contemplating the frenetic exposures of Winogrand we can understand our own manias and illusions of sociability, which are intended for a global club of general acceptance and shared experience.

The coldness of Winogrand's vision, with its ambiguous sense of common experience - something that is seen in some sort of constant motion, whether on foot or by car, with so little apparent connection beyond a quick motion of a finger to the camera shutter, now looks like the real thing in terms of understanding a camera in our late capitalist world.

What also stands out in this hideous pre-Photoshop world of cars, suburbia, demonstrations, parties, etc is a sense of racial upheavals:

In the exhibition Only Skin Deep at the International Center of Photography, curators Brian Wallis and Coco Fusco included the Winogrand image of the interracial couple in Central Park who carry chimpanzees in their arms like babies. This relates to the highly charged racial issues that marked the 1960s: Along with the social strife related to integration and political visibility of the time, it also touches on historical fears generated by medicalized racial theories and the potentials of miscegenation. The Winogrand image has an editorial photo humor to it that takes nanoseconds to take in. The couple are both groomed and gorgeous, and the image looks potentially set up, whether from a commercial project, or publicity stunt. The chaotic social relations that were kept in check by its High Modernist Czar John Szarkowski now spill out into the unruly afterlife of the images.

At least in the Met exhibition, which given the potential number of images in the estate, is still a small, potentially inconclusive fragment, there were other images in which there are less charged but still noticeable indications of a racialized social space.

Winogrand's politics are opaque: The demonstrations in Central Park, the bloodied protesters, the provocative nudists look awkward or ungainly, no different from the hideous charity balls and glamorous events also included in Public Relations. No one looks all that good, ever, the camera frame is a routinely unpleasant and unflattering. The women in Women Are Beautiful are not photographed beautifully. The book functions as a paean to stalking, to "creeping" as my younger friends term it. The camera reveals itself as an apparatus of aggression, of entrapment, and neurotic loss: what we see is an endless stream of shoulda, woulda, coulda, passing us by on the street, at the mall, in a park, wherever. The images are a litany of the horrors of others and other lives, floating out of reach but elevated to an eternity of regret as a photograph.

Winogrand's lack of felicity, while macho, anti-social, and potentially rude, in his automatic dismissal of the world as a house of cruddiness, is what now separates his work from our immediate continuum of Facebook, Instagram and other social media that amplify our needs to flatter and succor the world, to better fit in it. The crudeness of Winogrand's images help us in recognizing the polished electronic fantasies of Facebook and Instagram as false community, false culture, false history, as an artificial paradise of would-be shiny optimism in the face of the daily disasters at hand.

Considering that we live in a world of sharp contrasts, between a disintegrating economy and ecological disaster on one hand, and an electronic never-never land of boosterism and conviviality on the other, we should recall that in the time Winogrand was working, a potential for global annihilation was also a principle of the everyday vis-a-vis "The Bomb" - another fly in the ointment of Cold War optimism. Winogrand's gift for us is his unhappiness.

from Garry Winogrand's 1963 application for a Guggenheim Fellowship:

I look at pictures I have done up to now and they make me feel that who we are and what is to become of us just doesn't matter. Our aspirations and successes have been cheap and petty. I read the newspapers, the columnists, some books, I look at some magazines (our press). They all deal in illusions and fantasies. I can only conclude that we have lost ourselves, and that the bomb may finish the job permanently, and it just doesn't matter, we have not loved life. I cannot accept my conclusions and so I must continue this photographic investigation further and deeper. This is my project.