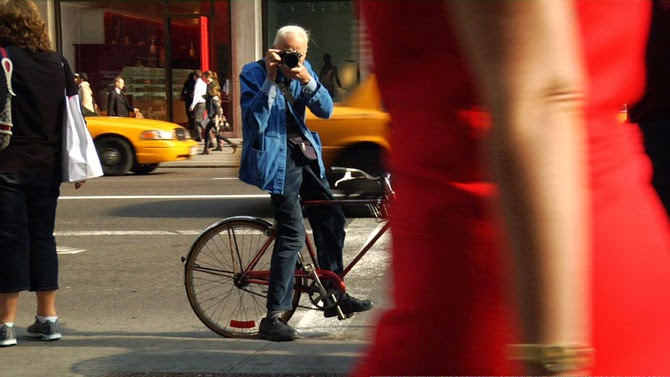 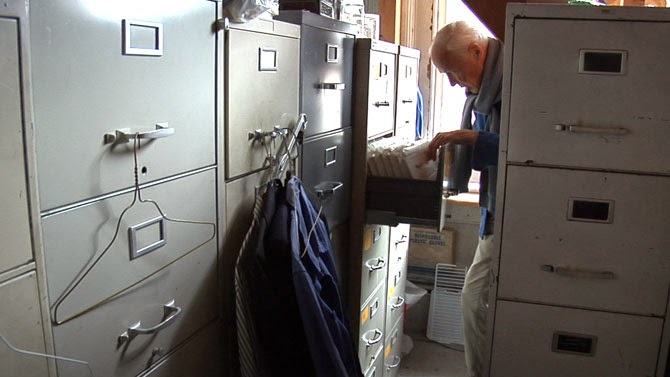 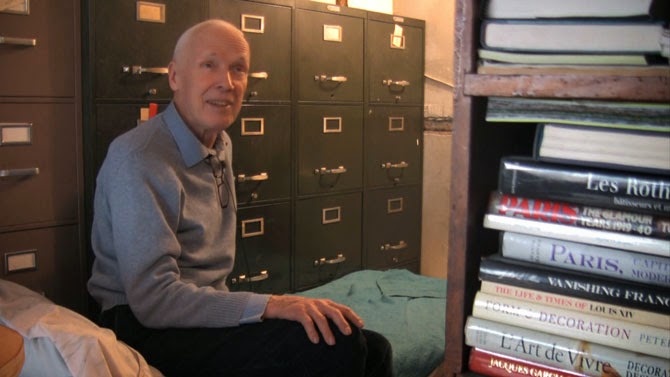 After moving to New York City in 1981, one of the first people I began to recognize with frequency was a slim man on a bicycle, with a camera who would seem to be just about anywhere at any given time, transversing downtown, Midtown, the Upper East Side, etc.

I don't know when I became aware that this fellow, looking boyish and agile, with fine bones & smooth hair, was Bill Cunningham; nor do I remember when I became aware of his photo spreads in the New York Times. In those lean pre-internet days, the hefty Sunday edition would be a weekly weekend ritual: going out to get the paper to go with my morning coffee;  and when I lived in the Lower East Side, picking up a bagel with cream cheese at a place nearby on Essex Street, to eat while looking through it. Bill Cunningham's spreads would be about fashion trends, although identifying them strictly as fashion does not really describe them at all: there's an anthropological delight at work in finding commonalities in the chaos of urban crowds, making structural comparisons. In the numbing din of an urban setting there is great attention and focus, and a sense of life in movement.

Cunningham worked elsewhere too: in the Annie Flanders iteration of Details, for Women's Wear Daily - all of that was off my radar, although I did look at Details in those days, which was like a report from the then edgy East Village.

The photographs themselves are deceivingly artless: done with a telephoto lens, or cropped to emphasize a particular item, there's no apparent photographer directing the images. These are not quite surveillance photographs, what we see are an archive of fragments of life passing on the streets, from an ambiguously neutral position, fashion-reportage from the "field." There is a sense of the street as a living theater of display.

This idea of the street as shared theater came out of the industrialization and urbanization in the nineteenth century, in the revocation of sumptuary laws, and the blurring of social positions in the upheavals of modernity.  The invention of photography offered a scientific mirror of resemblances which could also, in apparent paradox, conceal meaning too. In the Poe story The Man of the Crowd,  the narrator, seeing a stranger, shadowing the stranger as if to unpack his secret (what secret?), leads to no conclusions except exhaustion and an uneasy truce with un-knowing.

Bill Cunningham's photos could be seen as our equivalent of Baudelaire's distinctions about the temporal beauty that comprises the work of Constantin Guys: a delight in the moment which has no shelf life in itself, transposed into the frieze of modern life. In the case of Cunningham and the New York Times, in the modernist layouts of the newspaper, this also touches on scrapbooking, motion studies, and collage.

The idea of being in public also seems in eclipse in the world we live in. Is Bill Cunningham a valiant knight of modernity in this sense? Holding up a collage of dandyism that is for both ourselves and others? Do people feel like they are even outside anymore or is the street simply a movement from one inside to another?

The Richard Press film Bill Cunningham New York is an amazing window into the milieu of Bill Cunningham, his daily work, and the range of his world, from photo lab to diner to New York Times to  rarified social orbits to his studio in Carnegie Hall.

In his ubiquity on the streets, on his bicycle, looking refined yet never imposing, Bill Cunningham is able to render himself more or less invisible. This lack of aggression is the opposite of classic street photography, in which there is a downright macho approach to the idea of being outside, among others, with an individual, alienated, abstracted camera frame at the foreground. Bill Cunningham comes off as a Fred Astaire figure - graceful, charming, humorous, attentive. The gestures and postures of those photographed are rendered with as close a photographic objectivity as possible. What keeps this from being machine-like is Cunningham's sensitivity to fashion, to display, and attraction.

The film is also a great document of the kinds of lives which could be lived in New York City that are now becoming obsolete in the harsh economic shifts of our present day, whether as an artist or "jobber" in the Fashion District. Seeing the studios of both Cunningham and Editta Sherman in Carnegie Hall should remind everyone that we are living in a shrinking, regulated world of less in our daily lives. Cunningham exemplifies thrift in some respects - the uniform-like nature of his clothes, his basic cot surrounded by file cabinets and books, his diner and take-out meals - he also has a measure of freedom which he attributes to living without money, which in so many ways seems impossible now except in terms of being homeless.

In the tapestry of dandyism, high society, and journalism detailed in the film, at the onset Cunningham mentions the work of Japanese designers in the 1980s, in particular Rei Kawakubo, looking at the homeless as inspiration for her work. This is also mentioned in one of the essays in John Waters' Role Models. Cunningham's mention is a weird flash, as it were, in what seems a fairly stable social fabric, even if Cunningham's eviction from Carnegie Hall is part of the narrative, which when mentioned in the film Cunningham responds with stoic indifference. Cunningham is a figure of constant paradox: a shy person who lives entirely in public events; a very sharp observant person who has little to say for himself. The difference may be partially generational, but I think we also live in a culture wherein disclosure of the self can lead to as much as "smokescreen" of concealment as saying little or nothing. The words we use enclose a subject rather than liberate it.

Beyond the interest in Cunningham that drives the film, I want to point out some of the virtues of the film itself, primarily its simplicity and its discretion.

Near the end Cunningham is asked if he ever had a love in his life. "Do you mean 'Am I gay?'" Cunningham asks back, to which he adds that that is what his family feared - beyond that Cunningham didn't answer the question. I feared the film would lapse into a sort of emotional breakdown, a la the end of Shirley Clarke's Portrait of Jason or any Barbara Walters interview, but it veers away from any resolution beyond that awkward moment. What we see as we saw throughout the film is the oblique independence Cunningham and his devotion to his work. That gives a moral lesson beyond our contemporary world of stage-crafted personalities. The film ends with a birthday party at the New York Times with the crew singing a parody of the song "Kids" from Bye-Bye Birdie, transposed to "Bill" which includes the refrain "and you always get your way!" Enough said there.