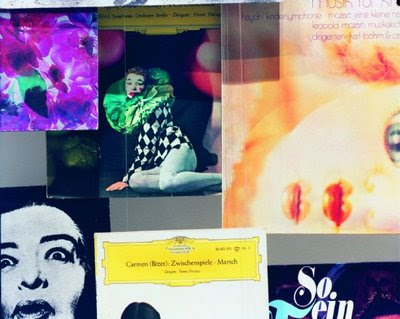 The other curious body of work in the show is by Annette Kelm, a triptych of Herbert Tobias album covers. This brings to mind an essay by the late Herve Guibert about record album covers, their tactility & resonance as sensuous objects & their primacy as aethetic experiences. Herbert Tobias was a great German gay photographer in the 1950s & 1960s. His commercial work for Deutsche Grammophon is both kitsch & trendy & meant to be ephemeral, a kind of post-WWII modernism - the subjective photography of Otto Steinert, applied in a commercial field. Kelm's use of the images invokes a historical recovery in seemingly trivial work to reveal a worldview of myth, culture & longing.
Posted by One Way Street at 1:53 PM

I would like to counter the final Norris Church comment. Whatever you think of her paintings, or did think, she is a beautiful Pre-Raphaelite angel in her own right, and, actually, I believe substantive beyond her image as a former model. I met her at the NYPL, and was was touched by her wistfulness and intelligence to a surprising degree. I think the great Mailer chose well.