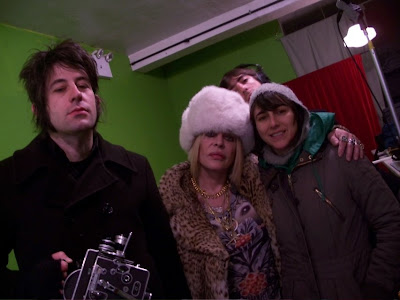 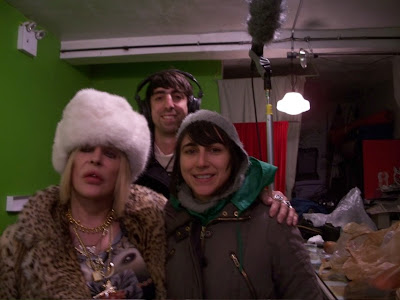 As much as I love film (in general), filmmaking itself has never appealed to me in its intricacies, its fragmentary difficulties, & the necessity of collaborations. The relative independence of a darkroom has always appealed to my more solitary needs.

Nevertheless, over the past few years I have had opportunities to work with my friend Marie Losier making stills on some of her projects, "Eat My Makeup!" & "Flying Saucey!" in particular, & just the other day I worked with her on a film portrait of the musician Genesis P'Orridge, who was filmed at the Coney Island Museum, with the artist Orlan.

The crew was small: Sebastien Sanz de Santa Maria, Ben Kasulke, Suzanne Goldenberg, and Peter Hristoff. Even with the absolute cheapest of budgets, I realize that Marie is involved in months of planning (the date for introducing 2 strong personalities, Genesis & Orlan, was weeks in the making). To Marie's credit, there is still an anarchic sense of play to her shoots. Marie sets up situations which become the perimeters of various actions. For "Eat My Makeup!" it was a pie fight (with among others George Kuchar). For "Flying Saucey!" it was a spaghetti fight (200 pounds of pasta, 5 gallons of tomato sauce, 15 or so people). Of her film portraits I have seen only the one of Richard Foreman, which was made during the run of "King Cowboy Rufus Rules the World" at St. Marks Church, & which showed in the 2006 Whitney Biennial, & the portraits of George & Mike Kuchar. The portraits are made over a longer period of time & involve a lot more editing & post-production.

For me, working on Marie's films is downright party-like. Part of this is Marie herself & her most pleasant friends & colleagues, but also, I feel liberated from my own work - this is about Marie's project(s) & vision(s), her efforts. The shoot with Genesis & Orlan was fairly difficult, yet I cannot describe it as drudgery by any means.

Initially I met Sebastien & Ben outside of Genesis' apt., which is further out on the L train, near the intersection of Myrtle & Wyckoff. A transitional area - where Bushwick & Ridgewood blur into one another. trees. sturdy squat apt bldgs (looking a bit more Queens than Brooklyn). small businesses (bodegas, 99-cent stores). all in spitting distance of the elevated J/M trains. When Genesis came down, we took a car service out to Coney Island, out a street I did not know - Pennsylvania Ave. - & the Belt Parkway, going through a Brooklyn I did not recognize: from older streets to more suburban apartment blocks, McMansions in Mill Basin shining over water, until the more recognizable streets of Brighton Beach appeared.

The museum relocated recently, due to the imminent demise of Astroland, directly on Surf Ave. It's on the 2nd floor, & is basically 2 rooms, one large, with a small stage & player piano, dusty dodge-em cars, distortion mirrors, signs from the World in Wax Musee, & other ephemera. I spent much more time in Coney Island in the 1980s & early 1990s - it's been several years since I've been there. Like most of NYC, the topography is not static: there is near constant destruction & rebuilding. A new subway stop, for instance, which buried the vendors of yellow food & the long-gone Hollywood Bar & Grill which once were there. Formerly one of the hordes photographing the place, now I realize that my photos, regardless of their qualities (or lack thereof) constitute a document, independent of my skills, a little time tunnel to a shifting world.

Both Sebastien & Ben are extremely gentle & sweet - Genesis came down in white go-go boots, psychedelic tights, a ripped up up denim mini-skirt, a very graphic top with eyes looking out on his upper chest, lots of jewelry, a leopard print coat, & a white-blond china-girl wig. With his cheek, lip & breast implants & bright make-up he reminded me a bit of Melanie Griffin. As I understand it, Genesis' trans-gendering is not really about changing his sex, but making a new one, a kind of twinning with his late wife Lady Jaye Breyer. Genesis refers to himself with the royal "we", but my guess is that we includes Lady Jaye as well, now in the spirit world. What an intense tribute to what seems a great love. What I know of his music is very bold, but in person he seems much more sensitive, even nervous. Both Seb & Ben were delicate with him: Genesis himself has a presence which elicits succor. (To observe kindnesses in the everyday, in ordinary ways, can be moving somehow, even when ineffable to downright imperceptible.)(also: what good looking guys). Lights were set up, props were pulled out. Genesis had a top hat, emblazoned with a red sequin g-string, & topped by a toy chicken which would crow when its sound/motion sensor was activated (sometimes incessantly). Genesis would bend towards the chicken & scream "SHUT UP!" to set off the crowing, but sometimes it would go off without such a strong provocation. Marie had a tentative trajectory set up - of Genesis & Orlan greeting one another, then walking through the museum, sitting down to talk & then going out for a walk. This was all contingent on the movements of our stars, whose actions were not necessarily so proscribed.

Marie came with Orlan a bit later. A genuine meeting at the door of the museum was pre-empted by Genesis staying in the bathroom to freshen his makeup. Orlan came with her husband Raphael (sp?), who had high hair like Orlan, but it was brown in color with reddish tips. After introductions, they played with the mirrors a bit, & then sat down, in front of the player piano (with a dusty stuffed crocodile on top)& spoke for about 2 hours, about their work & about media - both have very distinguishing physical presences, which are often given undue attention over their actual work (at least for Genesis - my guess is that for Orlan her presence is her work). It went on. I do not think Marie anticipated such a "talking heads" meeting, but again - this is a fragment for her film.
Posted by One Way Street at 1:47 PM