The Hellfire Club episode of the Avengers 2011 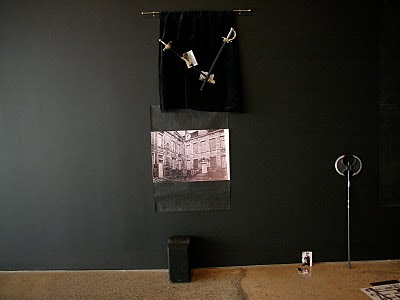 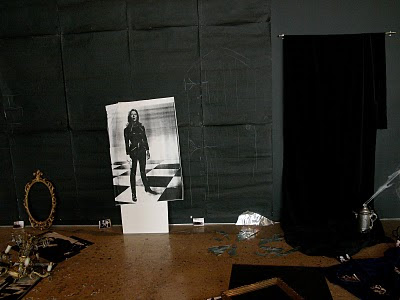 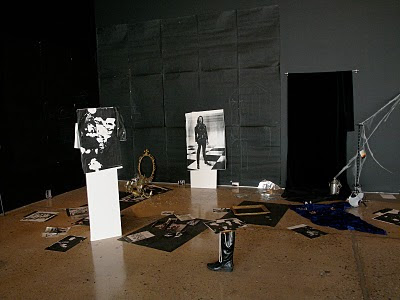 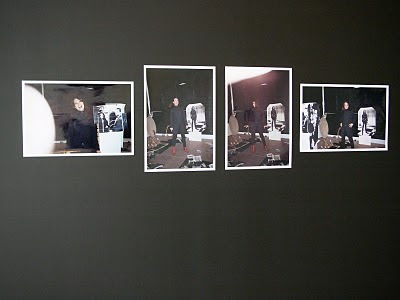 The current show of Karen Kilimnik's work at 303 Gallery includes a reconstruction of the installation The Hellfire Club episode of the Avengers, along with some photos of a girl posing a l'Emma Peel, and paintings of more "traditional" subject matter - dogs, landscape, portraits in heroic style (I can hear my Aunt Lucille imitating the movies here, pronouncing it "veddy English"), which relate in a kind of thrift store Anglophilia all around.

I find myself able to relate to it, both in terms of it as an art practice, as well as something (maybe not even art per se) which interfaces with media, with pop culture, which casts the experience as a kind of internalized subjectivity from which there is no discernible awakening. It's like a dream, the nature of which cannot be easily determined. It can be both gorgeous & terrifying. It's as if one's ego is nothing, supplanted by floating images from elsewhere, which are eminently desirable, yet it's awful too, sometimes.

There's a lot of art which deals with media images directly, with celebrity as a kind of mirror of whatever. & I get a sense that there really isn't much irony or depth in some of the work, or that there is meant to be (such as Elizabeth Peyton or Richard Phillips), & I'm not intending to suggest that there has to be. It doesn't mean much to me, but these images have had at least a contemporary resonance, for some. They show in galleries (what does that mean?). What I am intrigued with in the work of Karen Kilimnik, continually, is its morbid, romantic obsessiveness, its attachment to fantasies both grand & cheap. The work has a kind of entropy in its attachments, it is abject, it is kind of falling apart - & as such it resonates with a psychic landscape laid out like copy in a fashion magazine. The work picks up on the invasiveness of media, its aggressions.

But I am missing something here too: a figure like Emma Peel, especially in The Hellfire Club episode, is also a very empowering figure. She's tough, hot & self-possessed. We should all take some lessons from her, this fictional sylph. The photos of the girl posing with images of Emma Peel/Diana Rigg pick up on this, in a very direct way. The photos are wonderfully not-fine. They are simple; if they were in an envelope from a one-hour lab they would seem like someone's ordinary caprice, a scenario of "this is me, like the picture." The "amateur" can be theorized as a hapless consumer, as an absolute in passivity, however it could be seen as a much more complicated interchange. There's a murky deliriousness in the contemplation of these materials. There are intimations of violence - violence in cheap toys & decorations, in tinsel & gilt, in dupey Xeroxes, in not-so-secret yearnings for a world much richer than our own.
Posted by One Way Street at 3:49 PM

Hmm, the gal dressed as Mrs. Peel reminds me of Olivier Assayas' Irma Vep (1996) where Maggie Cheung is directed to adopt the guise of the silent epic's exotic heroine. It feels somehow dumb in comparison with the source work, but also irresistible as understandable homage. http://www.imdb.com/title/tt0116650/