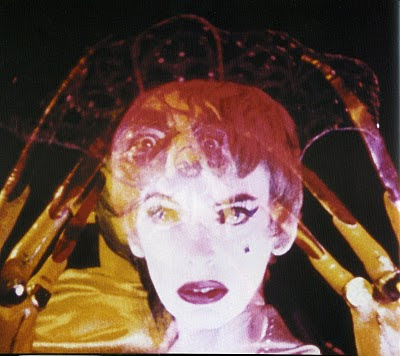 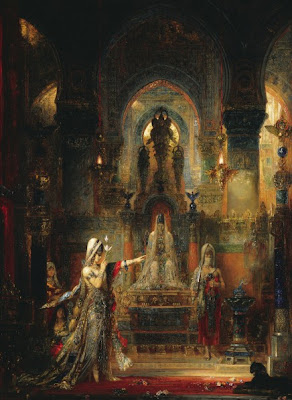 Marjorie Cameron's appearance in Kenneth Anger's film Inauguration of the Pleasure Dome as Kali, as the many incarnations of Isis, is a great cinematic presence. One cannot say precisely what she looks like - prominent eyes, prominent nose, prominent lips. In the film given the excesses of make-up, wigs & costumes, the hair color is confused, the the specificities of age are rendered moot. There is a nervous tension which marks her on-camera presence - it does not have the serenity of other stars of the silver screen. Cameron dominates the film, upstaging the excesses of Samson de Brier, who plays Osiris, as well as the various deities portrayed in the film - all of whom convene in a drunken orgy in which the young gorgeous Pan, played by Paul Mathison (sp?) is ultimately torn apart in the frenzy. There is a remarkable passage in the diary of Anais Nin about the making of the film, which also invokes Nin's consternation about being upstaged by Cameron, who remains an enigmatic cipher (& ultimately still having the final last non-word) in Nin's florid account of the film - Nin sees Cameron as a kind of negative to Nin's own glorious positive, shunt aside by the perversities of Anger.

As presences go, Cameron could retire after her performance in Inauguration of the Pleasure Dome, which was filmed in Samson de Brier's modest but flamboyantly colored Hollywood apartment. The film is a curious convocation of various gods meeting, or as my friend K. quoted one of her students writing about The Bacchae, partying in the woods. Anger is a curiosity in his allegiances: Ostensibly a follower of Aleister Crowley & the OTO, he is also strangely iconoclastic about the role playing & the seriousness of what must have been a rather tiresome practice, more difficult than the protocols of any organized church. There is always a sense of mockery & kitsch overriding the "rituals" of Anger's films, which perhaps gives them more credence than if they were party platforms for Satanism, Inc. Anger's films instead cavort in utter deliriousness. Their unruliness is what gives them a charge.

Cameron was no stranger to the world of organized Satanism, being the wife of Jack Parsons, who was one of the inventors of rocket fuel, one of the founders of the Jet Propulsion Lab, & also an active leader of the OTO in Pasadena CA. Parsons & his colleague L. Ron Hubbard conduced a series of experiments to invoke "Babalon" - the mythic red-headed Whore of Babylon, at which point Parsons met Cameron & they got together immediately. While Parsons may have regarded Cameron as a semi-deity & also a product of his own sorcery, the fact is she was with us until her death in 1995. Cameron painted, drew, wrote & she appeared in 2 films by Curtis Harrington, The Wormwood Star, & his feature film Night Tide.

In Night Tide Cameron has a small & highly mysterious role as a vaguely European femme fatale of occult-ish origins who addresses the female lead, Moyra, a carnival sideshow mermaid who may possibly be an actual mermaid, living under a curse of her dark ancestry. The scene is cribbed from Jacques Tourneur's Cat People, in which the cat-woman Simone Simon is addressed in a restaurant by an oversexed, fur-clad, exotic woman speaking an unknown language (Serbian? Simone Simon plays a Serbian in the film) as "my sister." A member of the same species addressing her. In both Cat People & Night Tide the female protagonist is fighting an overpowering sexuality. In Cat People it is embodied literally in the transformation into a killer cat, whereas in Night Tide it is revealed to be a hoax, but a hoax w/ fatal consequences, for the hapless mermaid. Cameron makes two appearances in Night Tide - in her Cat People-esque nightclub scene, addressing her "sister" & later, the Dennis Hopper character follows her to the sordid labyrinth of Venice CA (before gentrification), losing her. At the end of the film Hopper inquires about the Cameron figure, of whom no one knows anything - mystery unsolved!

A photograph of Cameron appeared on the cover of the first issue of Wallace Berman's magazine Semina. In Semina 1 there is a rather extravagant drawing of a female figure being fucked doggie-style which had the distinction of being confiscated by the LAPD as obscene material when exhibited at the Ferus Gallery. Given the impossible demands of being "Babalon," (talk about a tall order to execute!) Cameron appears most natural as it were as a bohemian artist, with or without occult trappings. I have a catalog from 2007 from the Nicole Klagsbrun Gallery of Cameron's drawings & watercolors. There is a withdrawn, decadent tone to the work, which touches on both Symbolist themes as well as experimental work such as the drawings that the poet Henri Michaux did under the influence of mescaline, which are more process-oriented.

I am reminded of the art historian Philippe Jullian's writings about symbolism & decadence, of themes incarnating in various forms. One can see these in both high & low art forms. From Gustave Moreau to Barbarella. The yearnings are what matter more so than the manifestations.
Posted by One Way Street at 12:58 PM

Fascinating historical intertwining of figures. Had some inkling of L. Ron's occult influences but never realized his involvement with the OTO. Of course, I was blown away when I read that Rudolf Steiner was also a member of the OTO, perhaps Crowley's own group, and purportedly was buried wearing his OTO regalia. Good to read some current pieces concerning Anger's work, which I always admired for it's sheer cinematic mastery of form, style, light, and occult content.
I have a theory that the real whore of Babylon may have referred to the Goddess Lilith, always marginalized & degraded in religious accounts, but who supposedly bore 2 daughters by Samael who went on to "wed" Cain(Awan) and most significantly, Seth(Kalimath,) thus ensuring the survival of our species.