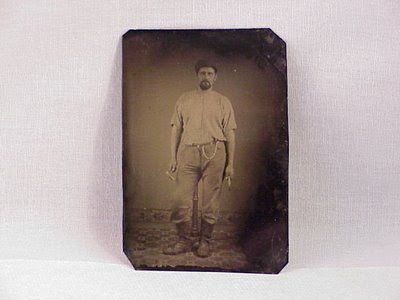 The term "occupational" for photographs comes from a commercial appellation: a term used by dealers to indicate a portrait in which the subject is presented in terms of work. It is an antique term as well - used for distinguishing the nature of early media such as the daguerreotype, ambrotype, & tintype, for example. This is slightly different than the multitude of ethnic types sold as mass-produced cartes-de-visite (the typical Swiss or Welsh, for example) in that the other processes cited were unique images & were meant to be individual portraits, even if the portrait focused on a more generic social position such as one's trade.

Heaven bless such traders of images, for allowing them to continue to circulate into the present day, without dint of high artistic standards. I cannot help but think of more-or-less contemporaneous images such as those of the US Civil War which persisted because of the extreme ardor of those collecting any ephemeral aspect of the conflict. The numerous books of Matthew Brady's images for example: poorly printed, ignoring the visual qualities of the images in lieu of their historical (non-visual) significance. These all predate the modernist epicureanism of the Photo Dept at the Museum of Modern Art or other such venues in which the subject of the images is subordinate to their formal qualities.

From such "lowly" considerations, there is nevertheless a genuinely fertile & expansive way to consider images outside the scales of aesthetic hierarchies. Revisiting the exhibition at ICP, "America and the Tintype" I find that it has deepened my interest in the tintype, also its permutations. One of the provisional categories in the exhibit is the "occupational portrait" of which there are dozens of examples. For the most part the trades shown are artisanal & in the period in which they were taken they were being made obsolete by industrialization and mass production, The curator, Steven Kasher, makes an argument that such portraits, which would have been commissioned by the subjects, in effect represent a social assertiveness of the little man, the itinerant tradesman, a kind of embodiment of one's skills intertwined with one's identity. Such a synthesis of self, work & image seems impossible in our own media-based but alienated culture. I am not what I do everyday. Who would want to show that?

The occupational portrait has a pre-photographic history in European graphic traditions dating back to the 17th century of representations of itinerant trades. These are generic images - not of individuals but of types. The emphasis on lowly "types" as color - ethnic, geographic, class-based - was a tradition for the upper-middle-classes & aristocracy which functioned as entertainment, and informed later anthropological studies. The itinerant, the poor, are an exotic other in our midst. There is also an erotic element to looking at such abject classes. In Alain Corbin's history of the beach he cites the important erotic allure of working women, with bared feet & ankles seen at the shore - that this would be a revealing of flesh outside the confines of respectability & a powerful image as such. This in turn brings to mind the unstated eroticism of Walter Benjamin's mention of the Hill & Adamson photographs of the Newhaven fishwife in "A Small History of Photography." This is outside the social advocacy which we have seen in much photographic work, yet in terms of formal structures they are remarkably parallel. One could cite an early work such as John Thomsen's Street Types of London as being a rather dour moralistic Victorian reinvention of what had been hitherto a source of laughter & delight for the higher echelons of society - de-emphasizing the charm of such itinerant local color, being too specific & "real" even without individual names & situations cited. The photograph, as a medium, lost any aesthetic disinterested consideration in its emphasis on mechanical appearance - it was a form of industry made visible, as opposed to the mediation of an artist's hand. As an art, following traditions, it looked garish & unseemly. "Occupationals" lack the skill of fancier private portraits: frontal, with a frontal gaze, as opposed to the more aesthetic sideways glance, the beautiful pose which would turn the portrait into a consideration of beauty & poise. Tools in hand. Ready to work.

Kasher's reading of the occupational portrait, of such a portrait, while directed by economy, social strata, class, nevertheless representing an assertion by the subject, is an important re-writing of photographic history. Our so-called "vernacular" photography (& vernacular is a vague word I overuse myself) has so often been seen as a kind of technological determinism - a limited set of qualities which are foisted on the un-thinking subject. Kasher proposes a much more dynamic interaction between the subject & the paltry low-class tintype. & one can elaborate more, with other work, from there.

ICP has had some remarkable exhibitions of vernacular work: "African American Vernacular Photography" from the Daniel Cowin Collection. Geoffrey Batchen's exhibit, "Forget-Me-Not" of photography used as memorials for the dead. & also a small show of E.J. Bellocq, done in conjunction with the George Eastman House for a series of shows "New Histories of Photography." Photography relegated to the art museum denies its social roles & its experiences outside the museum. ICP has done important work in considering the myriad workings of photography in our world & also how it has been written, in the past & now.
Posted by One Way Street at 2:55 PM