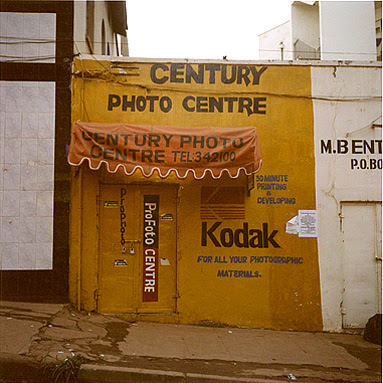 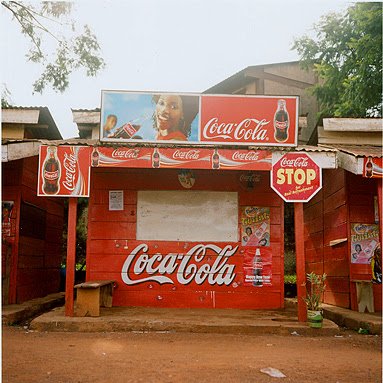 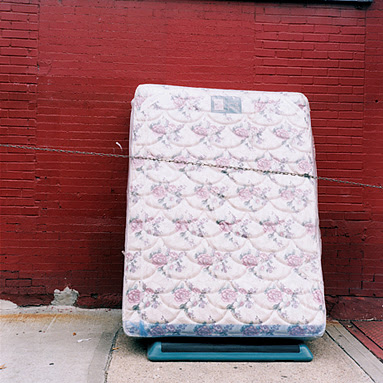 Zoe Leonard's book Analogue is an artists book/catalogue from her exhibition at the Wexner Center for the Arts. The images date from 1998-2007, & were taken in poorer (or formerly poorer) neighborhoods in New York such as the Lower East Side, Harlem, Canal St., Williamsburg, Bushwick, as well as more (seemingly) exotic locales such as Kampala, Warsaw, Havana, Ramallah, Budapest, Chicago. The subject(s) are storefronts & merchandise displays in small storefronts, or by street vendors. I bring up the locations as the images themselves do not present their locations, visually - we need the captions, which are very precise, in order to "place" them.

I have never felt that I fully understood Zoe Leonard's photographs - visually there's a certain "poorness" to her framing & the quality of the prints, which is still not "poor" enough to be thoroughly amateurish, which could be very interesting (I think of some images from the 1970s, such as a series of self-portraits by Adrian Piper which are extremely underexposed - these are a "mistake" which becomes extremely seductive & mysterious - or the machine-made pop images of Ed Ruscha, for instance, which galvanize the drugstore print, the mechanization of the everyday, as an artistic tool). Instead I have often understood Leonard's photos to be an amplification of what I see a lot of students do: the photograph is used as a simple recording of something, whatever, anything, the image existing as a kind of evidence, or an indication of being somewhere. Even the subject of the exhibit/book Analogue is not so different - how many times have I seen students bring in images of storefronts? The generic storefront images often embody 2 distinct types - images of female mannequins in a seeming theater of commodified femininity, or the nostalgia of obsolete merchandise. How often our daydreams are connected to advertisements, to products.

My reservations aside, I see in the book Analogue, a re-hashing of the nostalgia for small abject storefronts, generic framing, indifferent print surface - & yet that is precisely what makes this a powerful work in itself. How sad & pathetic & overlooked the world looks in these photos.

The images can be read as a near catalogue of small-scale business, globally, but is also a type of business which is vanishing, or being pushed to the edges (flea markets, street side sales) of a global economy of corporate consolidations & franchises. Without being too systematic, the accumulation of Leonard's images is akin to a stroll down a street, or many streets, itself - meandering, intuitive.
Years ago at the Collective Unconscious I saw a 3-D slide show by Zoe Beloff of images of storefronts for shops specializing in ladies' undergarments in the Lower East Side - the slides also had an overlay of film, giving a much more spectral effect of the passage of time. Beloff's images as well were of an older immigrant economy which is almost entirely gone from the area now. Also, thinking of the "junk" being sold in these poor storefronts I thought of the essay by Rem Koolhaas, "Junk Space" - however as per Koolhaas, the junkspace is what is to come - a new world order of globalized, malled control. How even more invisible are the poor today in the face the new.
Posted by One Way Street at 9:07 AM